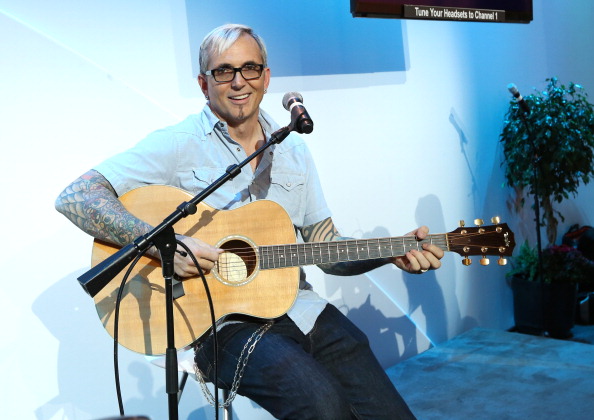 What Is Art Alexakis' Net Worth?

Art Alexakis is an American singer, songwriter, multi-instrumentalist, producer, music video director, and actor who has a net worth of $2 million. Alexakis is best known as the lead singer and guitarist for the rock band Everclear. With Everclear, Art has released nine studio albums, including "World of Noise" (1993), "Sparkle and Fade" (1995), "So Much for the Afterglow" (1997), "Welcome to the Drama Club" (2006), and "Black Is the New Black" (2015), and the band is known for singles such as "Santa Monica," "Everything to Everyone," "I Will Buy You a New Life," and "Wonderful." Alexakis has also written and produced tracks for other artists, launched his own record labels, and worked as an AR rep for Capitol Records.

Art Alexakis was born Arthur Paul Alexakis on April 12, 1962, in Los Angeles, California. When Alexakis was 5 years old, his father left, and his mother moved the family to Mar Vista Gardens, a Los Angeles housing project. Art grew up with four older siblings, and at the age of 12, he lost his brother George to a heroin overdose. That year, Alexakis' girlfriend, who was 15, died by suicide, and Art soon attempted to end his life as well, by jumping off the Santa Monica Pier with his pockets full of lead weights and sand. He later said that he was compelled to survive by the voice and vision of George. Alexakis was abused by older kids in his neighborhood, both physically and sexually, and at the age of 13, he began shooting up crystal meth and eventually became addicted to cocaine and heroin. He overdosed on cocaine at age 22, and he quit drugs in 1984. Art told the "London Free Press" in 1998, "I was depressed and feeling suicidal and just really hating my life and having really bad anxiety attacks. It was a good thing for me — kind of hitting bottom. At the time it was a black hole of hell. Now, looking back, it was the beginning for me." Alexakis studied film at Los Angeles Community College.

In the '80s, Art was in a Los Angeles-based band called Shakin' Brave, and after moving to San Francisco, he launched Shindig Records and released the 1989 album "Tragic Songs of Life" with his band the Easy Hoes. He then formed the band Colorfinger, which released the EP "Demonstration" and the album "Deep in the Heart of the Beast in the Sun" in 1990. A few Colorfinger songs were later recorded by Everclear, including "Heartspark Dollarsign," "Invisible," and "Hateful." After Alexakis moved to Portland, he formed Everclear with Scott Cuthbert and Craig Montoya, in 1992, and they released the EP "Nervous Weird" and the album "World of Noise" in 1993. Cuthbert was replaced in 1994, and Greg Eklund served as the band's drummer until 2003. Everclear's second album, 1995's "Sparkle and Fade," was a hit, going Platinum in the U.S., Canada, and Australia and reaching #25 on the "Billboard" 200 chart. The album featured the singles "Heroin Girl," "Santa Monica," "Heartspark Dollarsign," and "You Make Me Feel Like a Whore," and "Santa Monica" topped the "Billboard" Mainstream Rock chart. The band followed "Sparkle and Fade" with 1997's "So Much for the Afterglow," which was certified 2x Platinum in the U.S. and Canada. In 2000, they released the Platinum album "Songs from an American Movie Vol. One: Learning How to Smile" and the Gold album "Songs from an American Movie Vol. Two: Good Time for a Bad Attitude," followed by 2003's "Slow Motion Daydream" and 2006's "Welcome to the Drama Club."

Everclear's next two releases, 2009's "In a Different Light" and 2011's "Return to Santa Monica," contained re-recordings of tracks that had been on their previous albums, and 2012's "Invisible Stars" reached #5 on the Official New Zealand Music Chart. In 2015, the band released the album "Black Is the New Black," which reached #11 on the "Billboard" Independent Albums chart and #9 on the Official New Zealand Music Chart. In 2019, Alexakis released the solo album "Sun Songs," and he said of recording the album, "I wanted to make this record because I wanted to do something fun, challenging, and something I've never done before. I've always thought that making a solo record would be cool if I did it all by myself, and though I did need help with the engineering and production, I wrote all of the songs, played all of the instruments, and sang all of the vocals." Art also produced the 1996 Frogpond album "Count to Ten," and he founded the label Popularity Recordings in the early 2000s, producing the label's first album, Flipp's "Volume" (2002). He co-wrote and dueted with Marion Raven on the song "At the End of the Day," which was featured on Raven's albums "Here I Am" (2005) and "Set Me Free" (2007). In 2022, Everclear embarked on their 30th Anniversary Tour, and Art said of the milestone, "To me, it's a reason for celebration. I'm almost 60 years old. I've got MS. I've been through the ringer—a lot of it I put myself through—but I'm still here. The music's still here. Everclear is still here….I'm blessed that I get to do this for a living and am truly grateful for my life."

Art married Jenny Dodson in 1995, and they had a daughter named Annabella Rose in 1993. After Alexakis and Dodson divorced in 1999, Art was married to Stephanie Greig from August 2000 to April 2004. He welcomed daughter Arizona Star with his then-fiancée Vanessa Crawford in 2007, and he married Vanessa in 2009. Alexakis used to be an atheist, but while speaking about Grieg during a 2000 interview with "Spin," he stated, "She's a Christian, and I'm a Christian—my ex isn't—and so I was like, it's okay to be a Christian. I'm not like a born-again… Well, I guess I am born-again, in a way. But I don't knock people over the head with it. I just kind of use my spirituality to make my life better." In March 2019, Art revealed that he had been diagnosed with multiple sclerosis. In a letter posted on the Everclear website, he wrote, "Three years ago I was in an automobile accident, and though I totaled my car, I am thankful that no one involved was seriously hurt. About two weeks later, I started feeling a tingle and numbness in my arm, thinking it was a pinched nerve in my neck, I went to the doctor and underwent an MRI. The report showed that I did indeed have a pinched nerve, but the pathologist also saw lacerations and suspicious marks on my spinal cord as well…scary, to say the least. I was sent to see a neurologist, who did a ridiculous number of tests – more MRI's, a spinal tap, over fifty blood tests, and numerous cognitive and balance tests. After receiving the results, he told me that I have a form of Multiple Sclerosis (RRMS), and that I have had it for anywhere between 10 to 20 years."

In 2000, Alexakis testified before the House of Representatives Sub-Committee in support of the Compassion for Children and Child Support Enforcement Act (HR 1488), appearing on behalf of the Association for Children for Enforcement of Support (ACES). The organization honored him with the Golden Heart Award at its 15th Anniversary Party in 1999. In 2004, Art served as a delegate for the Democratic National Convention after campaigning for John Edwards during the presidential primaries; he represented Oregon's 3rd congressional district. He is a supporter of gay rights, and in 2010, he stated, "I don't think Prop 8, gay marriage or the things your community lobbies for are political issues. We are Americans; that's where it ends. If Lady Justice is supposed to be blind, then why not towards your community? It is going to happen; it's happening, and I think it is a great thing."

In 1996, Art paid $600,000 for a 5,519 square foot home in Portland. According to property records, he sold the five-bedroom, four-bathroom home for $1.265 million in 2002. In October 2020, the home went on the market for $1.95 million, with the listing mentioning that it was "famously owned by one of Portland's preeminent musicians, Art Alexakis of Everclear."