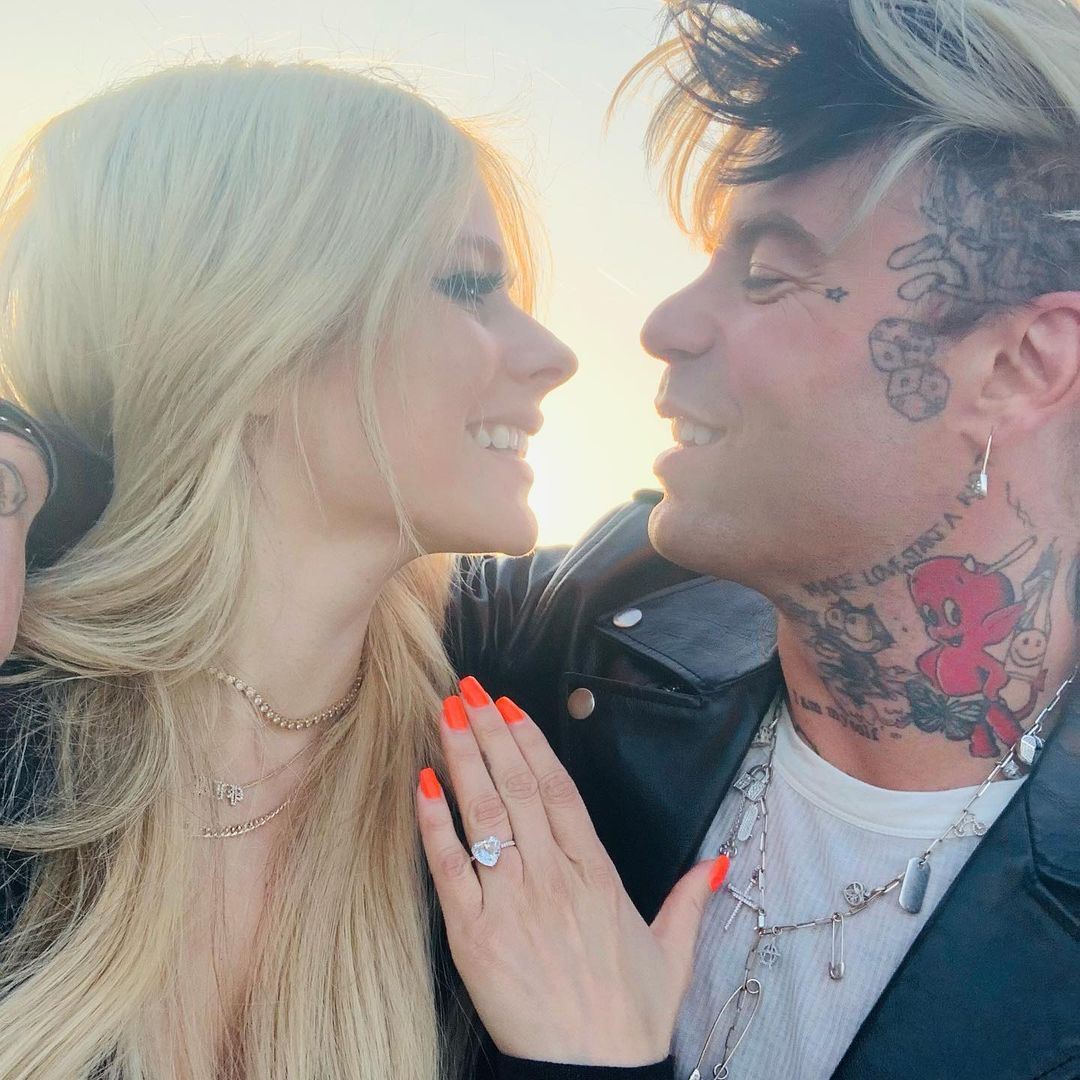 Avril Lavigne & Mod Sun got engaged in Paris, her ring is a heart-shaped diamond

Because I don’t pay close attention to Avril Lavigne, I had no idea that she was dating Mod Sun for about a year. They were together at the Grammys and when she chatted with Laverne Cox on the red carpet, she talked about how happy she is with him and she sounded so girlish! Avril is 37 years old and she’s already been married and divorced TWICE, to Deryck Whibley and Chad Kroeger. Ah, good times. I suspect Avril is one of those J.Lo kind of women, in love with love and always up for some romantic drama. In any case, Avril and Mod Sun are now engaged! They were in Paris BEFORE the Grammys and he proposed, then they went to the Grammys and didn’t tell anyone about the engagement, and now we’re here. Avril gave an exclusive interview to People.

Avril Lavigne got engaged to fellow pop-punk rocker Mod Sun on March 27 in Paris, the couple announced on Instagram Thursday.

“It was the most perfect, romantic proposal I could ever ask for. We were in Paris on a boat in the Seine River. We had a violin player, champagne and roses. It felt like time stood still, and it was just the two of us in the moment,” Lavigne, 37, tells PEOPLE exclusively of the proposal.

Mod, 35, popped the question with a custom-designed, heart-shaped ring set in a royal setting with little hearts from XIV Karats from Beverly Hills. “It has the words ‘Hi Icon’ engraved in it, which were the first words he ever said to me. And it has Mod + Avril on the inside,” Lavigne says. “He knew from the very beginning I wanted a heart shaped diamond because on the day we met, we had matching heart shaped paved rings on. We’ve worn them every day since, so its only fitting to have a heart-shaped engagement ring. I love it so much.”

While Lavigne says the proposal “was a total surprise,” she knew soon after they met that he was the one.

“I knew we had a very strong unstoppable connection from the first week of writing and working together in the studio. Immediately,” says Lavigne, who met Mod while working on her latest album, Love Sux. “He made every day better. It was like I had known him forever. As time went on, things kept getting better, and it felt incredibly natural.”

Now the pop-punk power couple can’t wait to plan their life together. “I look forward to having fun, creating, working together, touring together, growing together,” Lavigne adds. “It feels good to have someone who can help celebrate the good times, hold you through the tough ones, and be there for all the moments in between.”

Okay! Good for them. They seem happy and I’m glad he really planned out a romantic proposal in Paris, on a boat, with violins and roses and such. It sounds lovely. The heart-shaped diamond ring is… well, I find it a bit twee, but I think Avril is a bit twee, so it suits her vibe. Congrats to them! (The fact that she has an orange manicure for her engagement photos… wow.)