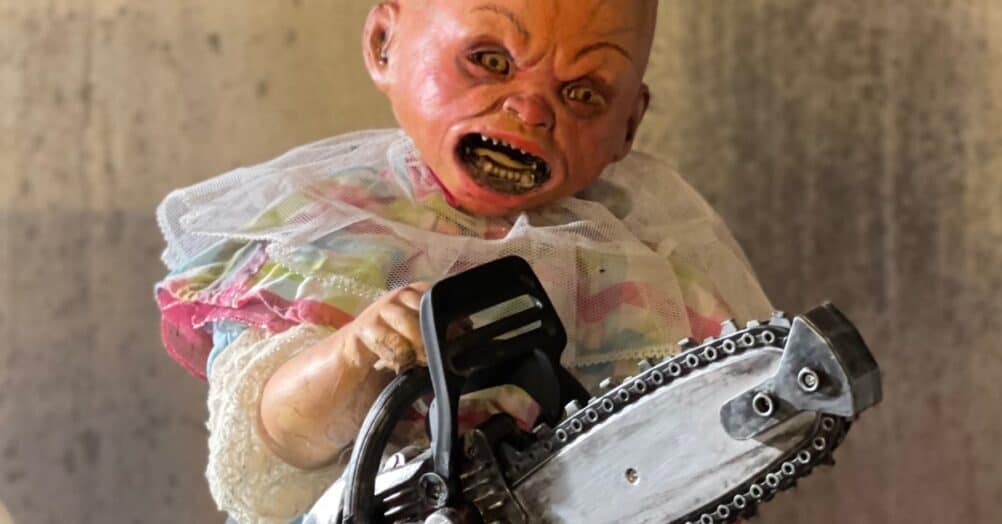 Last year, Full Moon extended their Demonic Toys franchise with two “chapters” of a new series called  Baby Oopsie . This summer, Baby Oopsie returns with four more chapters – and a trailer for the new chapters has been released online! You can check it out in the embed above.

Directed by William Butler, the Demonic Toys spin-off Baby Oopsie is described as being “an all-new, all-deranged and totally subversive sorta-sequel that’s sure to rip your senses to shreds!” Here’s the synopsis:

Perpetually picked on and endlessly neglected Sybil Pittman (Libbie Higgins, in a startling breakthrough performance) finds little joy in her life… except for her massive doll collection that has grown to perverse proportions! Every day, Sybil locks herself in her basement, broadcasting her doll restoration vlog all by herself, that is until the remnants of a mysterious doll – the dreaded “Baby Oopsie” comes into her life! After carefully restoring the doll, Sybil comes to realize that the tiny terror is exacting revenge on her oppressors, mercilessly murdering them one by one. And while Sybil finds herself enjoying Baby Oopsie’s bloody brand of vengeance, she soon changes her tune when the demonic toy turns its evil attentions to Sybil and those she actually cares about.

And here’s the synopsis for the new chapters:

The bloodthirsty baby is BACK! After being possessed by the powers of darkness and enabling Baby Oopsie’s grisly killing spree, Sybil snaps to her senses and vows to save her demon-possessed friend Ray-Ray while doing battle with two new tiny terrors hellbent on opening the gates of Toy Hell! Premiering this summer on Full Moon Features

Baby Oopsie stars Libbie Higgins, Lynne Acton McPherson, Justin Armistead, and Marilyn Bass… and judging by the trailer for the upcoming chapters, the show happens to be completely insane!

Our reviewer The Iceman watched the first two chapters of Baby Oopsie last October, and you can read his review at THIS LINK. You can watch them for yourself at FullMoonFeatures.com