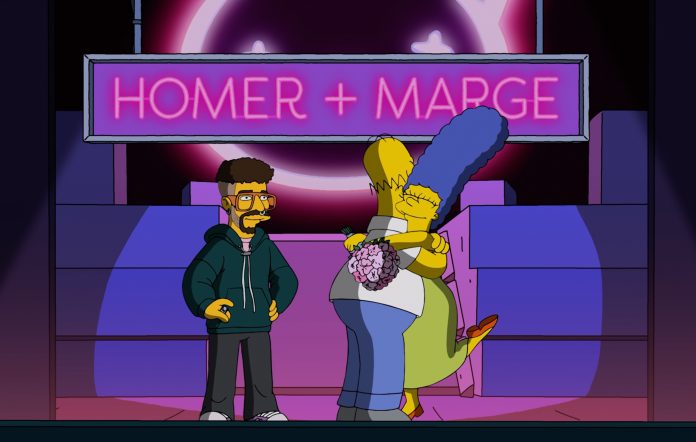 Bad Bunny has shared a video for his latest single, ‘Te Deseo Lo Mejor’, in which he enters the animated world of The Simpsons to help rekindle the flame between Homer and Marge.

The clip opens with Marge walking out on Homer when the latter finds more interest in his phone than her. But the Duff-chugging oaf learns quickly that he’s miserable in Marge’s absence, and endeavours to win her over at a gig that Bad Bunny plays at the Aztec Theatre.

Marge is unfazed by his efforts – as are the rest of the Simpson family – until Bad Bunny himself pulls the pair onstage, convincing Marge to give Homer a second chance (or at this point in the series’ timeline, 500th or so).

The clip was made in-house by the actual team behind The Simpsons, with series veteran David Silverman – who famously helmed The Simpsons Movie in 2007 – serving as director.

Take a look at the video for ‘Te Deseo Lo Mejor’ below:

The clip rounds out a massive year for the Puerto Rican popstar – in addition to dropping videos for ‘Booker T’ and ‘La Noche De Anoche’ (a collab with Rosalía), he’s also performed at the Grammys, the WWE’s World Rumble, the American Music Awards and on Saturday Night Live.

He also competed in an edition of the WWE’s WrestleMania series, locked in a new collaboration with Gorillaz, took home two wins at the AMAs (one for Favourite Male Latin Artist, and the other for Favourite Latin Album), and announced a US tour for 2022.

The Simpsons: 10 greatest characters to have only appeared in one episode

There's been some great one-episode wonders in The Simpsons over the years. Here's 10 of the best.

Earlier this month, Bad Bunny was named the most-streamed artist on Spotify for the whole of 2021, beating out Taylor Swift, Drake, Justin Bieber and BTS in the top five. It marks his second year straight with the title, racking up 8.3 billion streams in 2020.