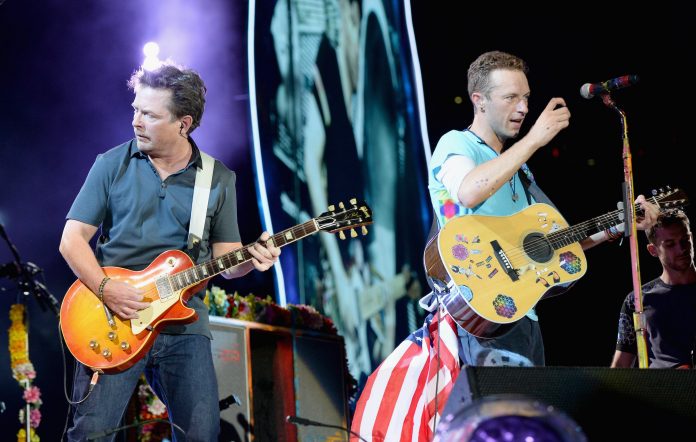 Coldplay frontman Chris Martin has discussed how Back To The Future made him want to be in a band.

Martin was appearing on The Kelly Clarkson Show and discussing his favourite cover versions that Coldplay have performed on stage over the years.

The frontman then spoke of his pride of having the 1985 film’s star Michael J. Fox joining Coldplay on stage at the MetLife Stadium in New York in 2016 to perform songs from the film.

“My No. 1, probably, is Michael J. Fox came and played two of the songs from Back to the Future with us. … That was really wonderful,” he told Clarkson. “Him coming to play ‘Johnny B. Goode’ and stuff, that was wonderful.”

Discussing Fox’s performance of Chuck Berry‘s ‘Johnny B. Goode’ in Back To The Future, Martin added: “That’s what made me want to be in a band, you know? That scene, yeah.

“I grew up in real farmland of England, before the internet. So any music on TV … The first thing I ever recorded was, there was a show called The A-Team. And I had a cassette recorder and held it against the TV to record the theme tune.”

Elsewhere, Martin has said that Coldplay will stop writing new music as a band in 2025. “Well I know I can tell you: our last proper record will come out in 2025 and after that I think we will only tour,” Martin told BBC Radio 2 presenter Jo Whiley last month. “Maybe we’ll do some collaborative things but the Coldplay catalogue, as it were, finishes then.”

The band released their ninth studio album, ‘Music Of The Spheres’, earlier this year. Speaking to NME in October, Martin said: “We’re going to make 12 albums. Because it’s a lot to pour everything into making them. I love it and it’s amazing, but it’s very intense too.

“I feel like because I know that challenge is finite, making this music doesn’t feel difficult, it feels like, ‘This is what we’re supposed to be doing’.”

Inside Coldplay's 'The Atmospheres' pop-up in London

The band are set to head out on a pioneering eco-friendly tour this year, with Martin recently admitting that there’s still “quite a long way to go” when it comes to finding a completely eco-friendly way to tour.

In October, the band announced that they were going to make their 2022 world stadium tour as ecologically friendly as possible. This followed their statement in 2019 that they were taking time to consider how they would tour in the future in an environmentally friendly manner.