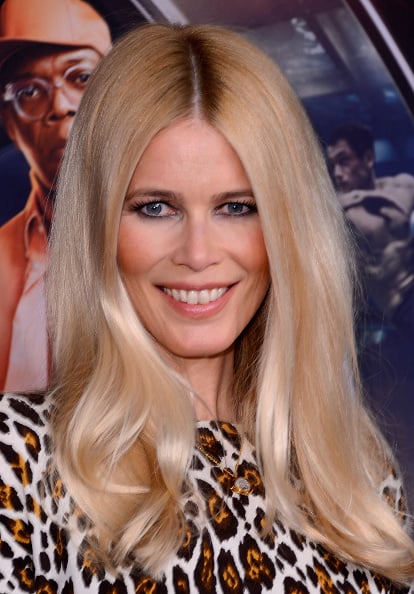 What Is Claudia Schiffer's Net Worth?

Claudia Schiffer is a German model, actress, producer, and fashion designer who has a net worth of $70 million. Schiffer originally found success in the modeling industry due to her striking resemblance to actress Brigitte Bardot. As of this writing, no model has appeared on as many magazine covers as Claudia, who has graced more than 1,000 of them, including "Vogue," "Rolling Stone," "Cosmopolitan," and "Vanity Fair." As an actress, Schiffer has appeared in the films "Richie Rich" (1994), "Prêt-à-Porter" (1994), "Zoolander" (2001), and "Love Actually" (2003) and the television series "Dharma Greg" (2002) and "Arrested Development" (2003).

Claudia Schiffer was born Claudia Maria Schiffer on August 25, 1970, in Rheinberg, North Rhine-Westphalia, West Germany. She grew up with mother Gudrun, father Heinz (a lawyer), sister Ann, and brothers Andreas and Stefan. Claudia is fluent in German, French, and English.

Schiffer originally wanted to become a lawyer and worked at her father's law firm. When she was 17, Claudia was discovered by Metropolitan Model Agency head Michel Levaton at a Düsseldorf nightclub, and she later signed with the agency. Schiffer left high school and traveled to Paris to take part in a trial photo shoot, and she soon appeared on the cover of  French "Elle" magazine. In the late '80s, she began starring in Guess? ad campaigns, and the company's co-founder, Paul Marciano, credited Claudia with making the Guess? name "much more known around the world." She later became the face of Chanel, and she walked the runway in her first fashion show in early 1990. Schiffer went on to walk in fashion shows for Versace, Christian Dior, Dolce Gabbana, Ralph Lauren, Louis Vuitton, and other fashion houses. Claudia has starred in ad campaigns for numerous brands, such as Giorgio Armani, Dom Pérignon, Bulgari, Marc Jacobs, Gap, Neiman Marcus, Dillard's, Revlon, Pepsi, and Saks Fifth Avenue, and she signed an exclusive worldwide contract with French company L'Oréal in 1997. She was reportedly paid £3 million for a 1998 Citroën advertisement. In 1995, Claudia and fellow models Elle Macpherson, Naomi Campbell, and Christy Turlington launched the Fashion Café restaurant chain.

In 1992, Schiffer made her acting debut in the TV movie "Inferno," and she appeared in her first feature films, "Richie Rich" and "Ready to Wear," in 1994. She co-starred with Matthew Modine in the 1997 drama "The Blackout," and in 1999, she appeared in the films "Friends Lovers" and "Black White" and lent her voice to the "A Head in the Polls" episode of "Futurama." The following year, Claudia starred in Bon Jovi's "Say It Isn't So" music video and the films "Desperate But Not Serious" and "In Pursuit." She appeared as herself in 2001's "Zoolander," and in 2002, she guest-starred in two episodes of "Dharma Greg" and co-starred with Sarah Jessica Parker and Harry Connick, Jr. in "Life Without Dick." In 2003, Schiffer appeared in the romantic comedy "Love Actually," which grossed $246.8 million at the box office. Claudia also released a series of exercise videos entitled "Claudia Schiffer's Perfectly Fit in 1996, and she hosted the 1995 World Music Awards. In 2011, she was a judge on "Fashion Fringe," a platform that "helps newbies learn how to run a fashion label and turn it into a successful business," and in 2012, she posed for Guess? to celebrate the brand's thirtieth anniversary. In recent years, Schiffer has appeared in the documentaries "Wonder Boy" (2019) and "Helmut Newton: The Bad and the Beautiful" (2020) and the TV movie "Bambi Medienpreis."

In 1993, Claudia began a relationship with magician David Copperfield after meeting him at a celebrity gala in Berlin. They became engaged at the beginning of 1994, and Schiffer would sometimes act as Copperfield's assistant during his magic shows. She also appeared in the 1994 documentary "David Copperfield: 15 Years of Magic." Claudia and David split up in 1999, and that year Schiffer won an undisclosed amount of money from a 1997 lawsuit she filed against "Paris Match" after the magazine claimed that her relationship with Copperfield was a sham. Claudia married Matthew Vaughn, future writer and director of "Kick-Ass," "X-Men: First Class," and "Kingsman: The Secret Service," on May 25, 2002, and they welcomed son Caspar in 2003, daughter Clementine in 2004, and daughter Cosima in 2010. The couple purchased a Suffolk Tudor manor known as Coldham Hall in 2002, and that same year a man was arrested after showing up at the home nine times; he was then detained under the Mental Health Act, and it was later discovered that he had previously stalked actress Sharon Shone and had been deported from the U.S. In 2004, a different man was arrested and deported for harassing Schiffer at her home. Claudia has served as a UK Goodwill Ambassador for UNICEF and a spokesperson for Make Poverty History.

Schiffer has won two Bambi Awards, for Shooting Star in 1991 and Fashion in 2017. In 2004, Claudia and her "Love Actually" co-stars were nominated for a Phoenix Film Critics Society Award for Best Ensemble Acting. Schiffer was named the "GQ" Woman of the Year in 2020.