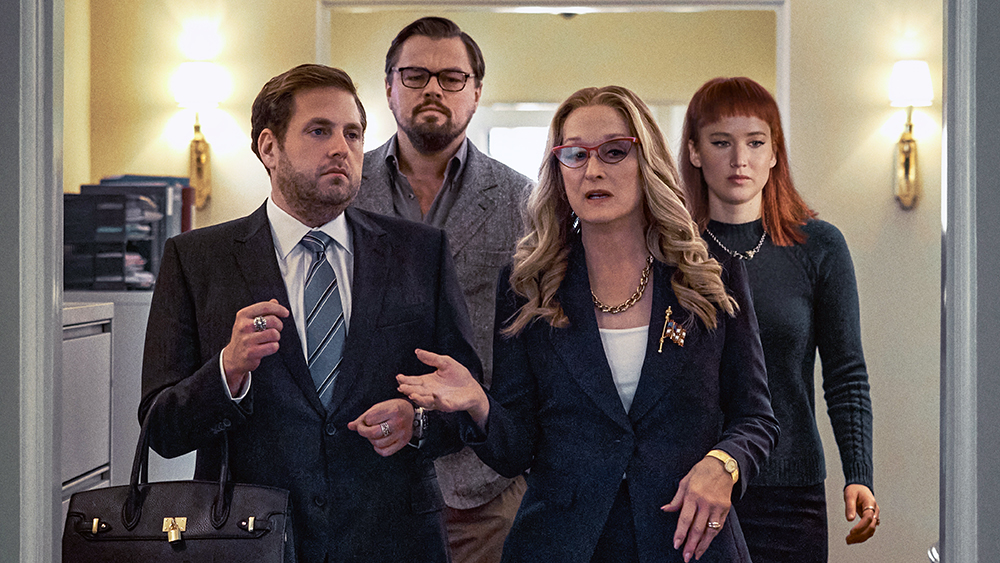 PLOT: Two astronomers (Leonardo DiCaprio Jennifer Lawrence) discover that a comet the size of Mount Everest will hit earth in six months, ending all life. They try to warn the U.S president (Meryl Streep) but find themselves both ignored and seduced by their sudden notoriety.

REVIEW: Satire is a tricky thing. When it works, you can make a classic like Dr. Strangelove or Network, but just as often, it goes awry, resulting in movies like American Dreamz or the big-screen version of The Bonfire of the Vanities. Were it getting a theatrical release, I truly believe Adam McKay’s Don’t Look Up would be an absolute disaster, making the Netflix release a blessing for all involved. An arch parody that points an accusing finger right back at most of the folks that will probably be lured into watching this on the merits of the all-star cast, Don’t Look Up commits the worst sin of all – it’s not funny.

This should be Exhibit A anytime anyone claims that comedy isn’t as hard an acting job as drama. McKay has assembled one of the biggest casts of all time but somehow forgot to cast anyone that was actually funny is what’s supposed to be a sharply witty satire. Of course, star Leonardo DiCaprio can be extremely funny when given the right material (Wolf of Wall Street, Once Upon a Time in Hollywood). That said, he’s disastrously cast in a role that, ideally, would have been played by McKay’s former cohort Will Ferrell.

He plays a bearded astronomer who, along with Jennifer Lawrence’s grad student, discovers that a comet will destroy the planet in a matter of months. With his constant mugging and screaming, DiCaprio is trying hard here but comes off as smug, with him “playing down” a nerdy scientist who proudly boasts to a romantic partner that he finally got Mark Hamill to sign his Star Wars poster. He’s rarely – if ever- been this bad. His big monologue, which is supposed to rival Network’s “I’m mad as hell” scene falls totally flat, although McKay’s probably more to blame than DiCaprio.

Jennifer Lawrence fares a lot better, as the more cynical half of the duo, a grad student without much faith in humanity and isn’t that surprised when no one cares the planet is about to end. DiCaprio gets the arc, with him ditching his family for short-lived fame and a fling with a TV host (played by Cate Blanchett), but Lawrence is better in the more thinly written part. The film is tedious in the last act, and Lawrence’s chemistry with Timothee Chalamet as a skater she takes up with saves it from being unwatchable. Chalamet does a funny parody of disaffected youth, and it’s a rare bright spot in this 138-minute slogfest.

Being a McKay movie, Don’t Look Up is thoroughly political in a way that will repel many, whatever side of the spectrum you happen to be on. What’s obnoxious here is McKay’s seeming instance that if the end of the world were inevitable, half of the country would say “don’t look up” and pretend the world wasn’t going to end, while of course Hollywood and the left would mobilize to try and save the day. In a world that’s already divided, this isn’t the film we need. Meryl Streep plays the U.S President who doesn’t believe or care that the world may end, and coins the slogan “Don’t Look Up,” while Jonah Hill (rarely this unfunny) plays her sniveling son and yes man.

All in all, Don’t Look Up is a disaster, and I doubt even the most liberal-leaning of us will find anything to like about McKay’s latest. While he can still be brilliant, there’s a smugness that’s infected his directorial efforts as of late that leaves a bad taste in my mouth. He assembled a great cast here, but it’s in service of a movie I doubt many will enjoy. Of everyone, Lawrence and Chalamet are the only ones who acquit themselves well (while Nicholas Britell’s score is the only aspect of the film I’d call award-worthy).  Some, such as an unwatchable Mark Rylance as a Mark Zuckerberg-style tech giant, come off worse than others (Tyler Perry is unexpectedly funny as a vapid TV host). All of the other big names will probably hope this gets lost in everyone’s Netflix queue and is quickly forgotten. 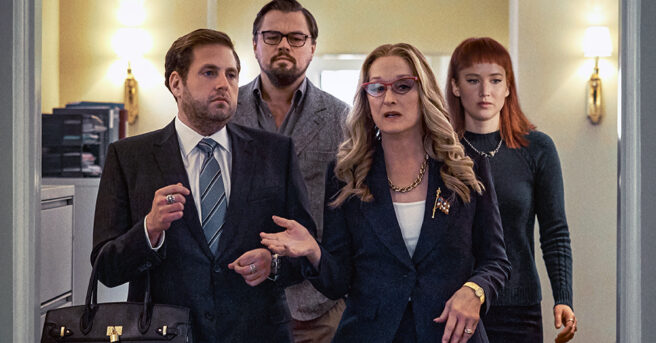