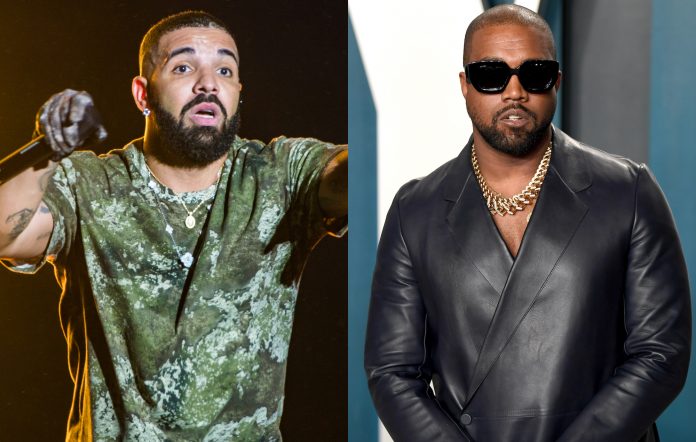 In newly shared footage from Kanye West’s recent ‘Free Larry Hoover’ benefit concert, Drake can be seen tearing up over his paired-back rendition of ‘Runaway’.

West’s performance of the 2010 track – a standout cut from his fifth album, ‘My Beautiful Dark Twisted Fantasy’ – was notably emotional. Matching its subject matter (that being West reflecting on failed relationships from his past), the track’s iconic instrumental was subbed out for bold, unaccompanied piano chords. Closing out the number, West ad-libbed the lyrics to mention his estranged wife, Kim Kardashian.

Take a look at a clip from the performance, showing Drake’s heartfelt reaction, below:

West’s ‘Free Larry Hoover’ concert took place in LA earlier this month; it marked his monumental reunion with Drake after the pair put an end to their longstanding feud, and saw them perform together for the first time since 2016. As its branding implies, the concert was a benefit held to free gang member Larry Hoover, who is currently serving a life sentence for murder.

At one point during the show, Drake referred to West as his “idol”. Other highlights included a play-through of West’s 2005 hit ‘Gold Digger’ – the first time it’s been played live since 2016 – and a duet between the pair on ‘Forever’.

The show was live-streamed for free via Amazon Prime, and shown at select IMAX cinemas across the US, with a portion of proceeds earned from the event’s direct ticket sales routed to a selection of criminal justice reform groups. Reps for West also confirmed that, despite earlier reports saying otherwise, profits from merch sold at the show would funnelled into charities supporting the same cause.

In a five-star review of the concert, NME said: “Tonight it turns out that you don’t need to have faith in anything other than the power of two talents at the top of their respective games to have a near-religious experience. Here’s to making up with your enemies.”

Drake's 'One Dance' - Does it deserve to be Number One in the UK?

We took to the streets to find out if people even know the track that is set to be the UK's longest-running Number One single.

West and Drake have both kept busy this month, particularly with their festive philantrophy. The week before Christmas, West donated 4,000 toys to children in his home city of Chicago, buying the bulk of them at a toy drive held at a local College. Meanwhile, Drake celebrated Christmas by handing out stacks of cash to random people in his own hometown of Toronto.