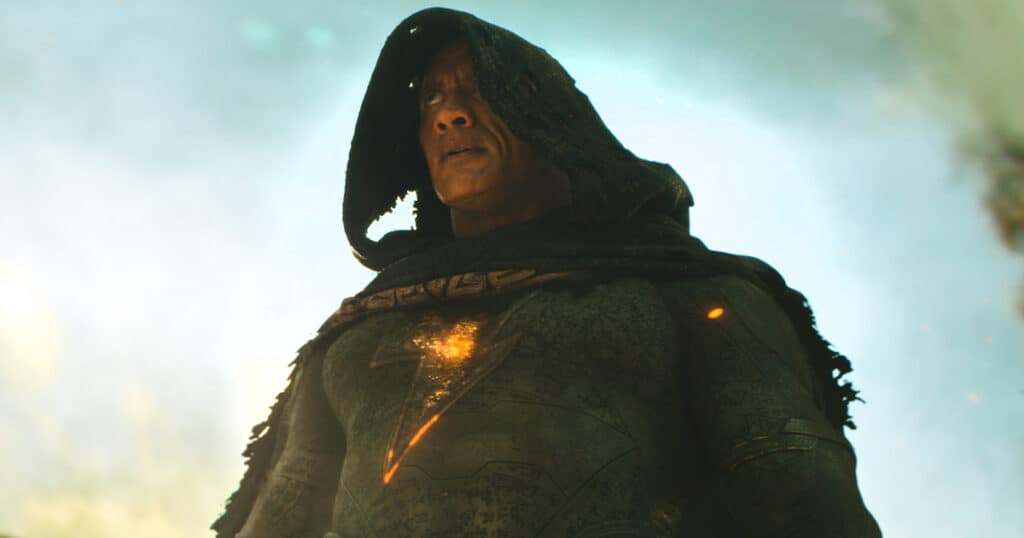 The Warner Bros. presentation at CinemaCon came to a close with Dwayne Johnson showing off Black Adam as well as DC League of Super Pets. The actor first appeared in what seemed to be a video message from Hawaii, before saying “f**k this” and walking up to the stage in person, which naturally prompted an enormous reaction from the audience.

As we all know, Black Adam has been a long time coming and Dwayne Johnson wanted to make sure that they took the time to do it right. It’s always been Johnson’s dream to make this movie and he says it feels unique and different, teasing once again that it will forever change the balance of power in the DC Universe.

Man, @TheRock knows how to get an audience PUMPED. Showed up with Black Adam footage – which rocked the house. He says, "we've got a shot with this one." I think he has way more than a shot. Looks awesome.

After bringing Noah Centino (Atom Smasher) and Quintessa Swindell (Cyclone) out on stage, Dwayne Johnson then recorded the audience screaming for a battle scene that will be featured in Black Adam. The new Black Adam trailer was then screened, which began with Doctor Fate (Pierce Brosnan) asking Black Adam, “What have your powers ever done for you?” and warning that he could either be the destroyer of this world or its saviour. Black Adam responds, “I died a slave and was reborn a god. I bow to no one.” After showing glimpses of the rest of the Justice Society of America, the trailer ends with Hawkman (Aldis Hodge) telling Black Adam that “heroes don’t kill people,” only for Adam to reply, “Well, I do.“

Dwayne Johnso also showed off some footage from DC League of Super Pets, in which he plays Krypto the Superdog. The film looks to be a lot of fun and really plays into the chemistry between Dwayne Johnson and Kevin Hart (Ace the Bat-Hound), with Johnson saying that Hart “remains my third child.” DC League of Super Pets will hit theaters on July 29, 2022, followed by Black Adam on October 21, 2022.