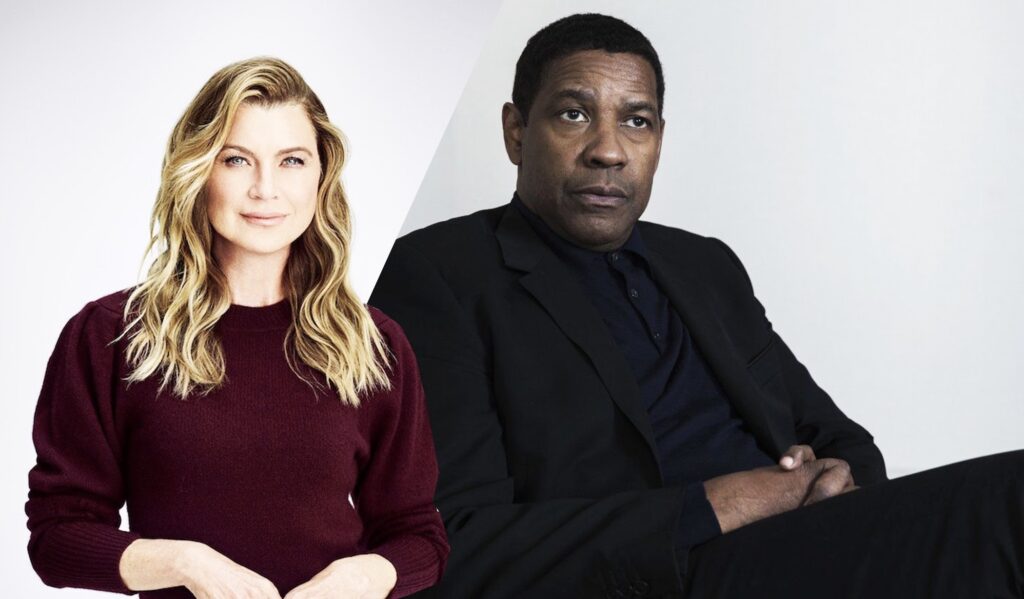 Ellen Pompeo Vs. Denzel Washington? It seems like an unlikely battle but apparently, it did happen in some capacity when Washington made his small-screen directing debut on her hit show, Grey’s Anatomy.

Washington directed the 2015 season 12 episode “The Sound of Silence.” According to Pompeo, things got a bit heated during the filming of one particular scene which led to the two getting into it on set. While sharing her story on a new episode of her podcast Tell Me With Ellen Pompeo with former Grey’s co-star Patrick Dempsey, the two began discussing directing and Dempsey asked her what it was like when Washington came on board to helm an episode. Dempsey had already departed the show the season before and didn’t get a chance to be directed by the actor. Even though Pompeo began by calling Washington “amazing”, she went on to reveal the heated exchange that the two had while shooting a scene, saying “he went nuts on me” before adding that she was telling a “good Denzel story” from his time on set before detailing what happened.

The actress says that she was shooting a scene for the end of the episode in which her character, Dr. Meredith Grey, is asked to listen to an apology from a man who seriously injured her, leaving her with a broken jaw. The story was inspired by a real-life incident in which an epileptic patient goes into a seizure and beats up a nurse. The scene was highly emotional which led to her improvising dialogue at the moment in response to an acting decision made by the guest star. The actor made the choice to speak softly to Pompeo in character in regards to the apology and the actress yelled at him, in character, to look her in the eye when he was apologizing. Pompeo says when she went off script and spoke dialogue that insinuated she was telling the actor what to do, “Denzel went ham on my ass.” Here is what she fully had to say:

“He was like, ‘I’m the director. Don’t you tell him what to do,’ And I was like, ‘Listen, motherf***er, this is my show. This is my set. Who are you telling?’ Like, ‘You barely know where the bathroom is.’ And I have the utmost respect for him as an actor, as a director, as everything, but like, yo, we went at one day.”

Pompeo said that she eventually ended up having a chat with Washington’s wife when she came to set, revealing that it was the actor’s wife who suggested he direct an episode of Grey’s because she was a fan. Pompeo says, “I was like, ‘Yeah, he yelled at me today. Yeah, he let me have it today, and I’m not okay with him, and I’m not looking at him, and I’m not talking to him.’ The actress added, “So we didn’t get through it without a fight, but you know, that’s actors for you, passionate and fiery, and that’s where you get the magic, and that’s where you get the good stuff. so it was an amazing experience, it really was.”

While Pompeo didn’t really reveal how they smoothed things over, she did go on to gush over what it was like to have Washington on set. Pompeo said, “Denzel is like, his energy is just nuts. He has this vibration, right? Certain actors just have an energy and a chemistry, like superstars are superstars for a reason. There’s just like an energy and a vibration that they give off that makes them super charismatic. Patrick[Dempsey] has it, Obama has it. Anyone that I’ve ever met that’s like crazy charismatic has it, and Denzel has it in spades, for sure.”

So it appears that the spat was over two artists just being passionate about the work but why does it seem like most of the drama on these shows happens behind the scenes? Make a series about that drama. I’d watch it.

What are YOUR thoughts on Ellen Pompeo’s Grey’s Anatomy spat with Denzel Washington?