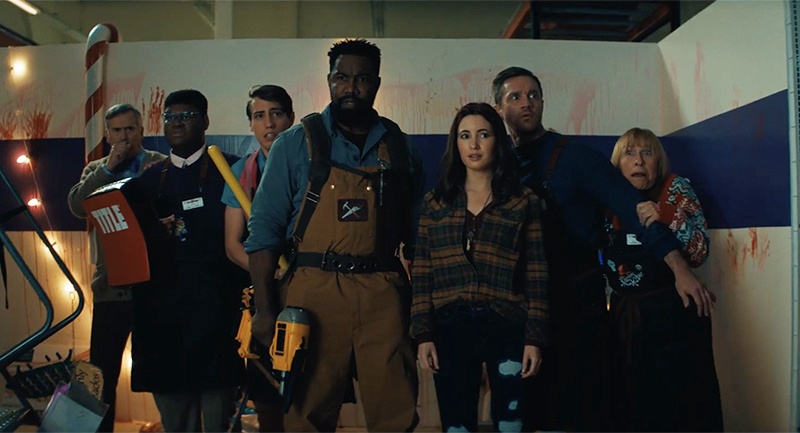 If there was ever a day of the year that deserved the horror movie treatment, Black Friday is the one. We’ve all seen the news footage of angry, zombie-like shoppers storming retail stores, desperate to get their hands on the latest deals with absolutely no regard for the overworked staffers. While this has been less of a common occurrence in the age of online retailers, it doesn’t make the true accounts of some of these violent incidents any less horrifying. Casey Tebo‘s Black Friday turns the metaphorical zombies into literal ones, making for a horror comedy rife with potential that it doesn’t fully capitalize on.

Ken (Devon Sawa, Final Destination) is a down-on-his-luck father in the midst of a divorce, lamenting his job as a low-level toy store employee at We ♥ Toys. He is prepared for a typically exhausting Black Friday with his fellow overworked crew of staffers, including potential love interest Marnie (Ivana Baquero, Pan’s Labyrinth), overachieving Christopher (Ryan Lee, Super 8), handy Archie (Michael Jai White, Spawn, Black Dynamite) perfect employee of the month Anita and new guy Emmett (Louie Kurtzman). Lorded over by their opportunistic manager Jonathan (Bruce Campbell, The Evil Dead) and his acerbic assistant Brian (Stephen Peck), the workers initially struggle with unpaid breaks, a lack of holiday bonuses and the looming danger of trampling-by-shoppers. Unfortunately, they soon find themselves in a cosmic battle for the planet as pink, blob-like aliens begin infecting the shoppers and mutating them into vicious creatures.

Working off of a script written by Andy Greskoviak, Tebo wastes no time getting right to the carnage. Character introductions and dynamics are handled swiftly before the attacks begin. It’s in these early moments that the film is at its best, with characters feeling lived-in and the humor feeling fresh. It turns stale rather quickly, however, with the film repeating the same types of jokes over and over. There are a few quiet moments between sequences of mayhem, with one shared Thanksgiving meal between the survivors offering some nice insight into their relationships and life situations. It’s one of the few genuine moments of pathos in the film that threatens to expand these characters beyond one-dimensional stereotypes, but it’s a threat that goes unfulfilled.

Similarly disappointing is the misuse of the toy store as a setting. This is a fun, colorful locale with plenty of opportunities for creativity when it comes to horror movie set pieces, but Black Friday seems content to treat it as any other drab warehouse. Nowhere to be seen are cleverly shot cat-and-mouse sequences between the aisles and we rarely see the creative use of toys as weapons. It’s all played loud and dumb, which makes for a perfectly acceptable (if not particularly memorable) viewing experience. It’s just unfortunate that you’ll find more bizarre hijinks and better kills in the all-too-brief climax of 2019’s Child’s Play remake.

Black Friday opts to go the surface-level route in its social critique, with a few lines about corporate greed and American consumerism thrown in for good measure. It’s just disappointing that the film refuses to dig any deeper than that, especially when George A. Romero did it so well over 40 years ago in Dawn of the Dead. The lack of wit becomes more and more apparent as the film trucks along. Not every joke is a dud (an elderly employee casually mentioning how they separated shoppers by race during the first Black Friday she ever worked earns a mean-spirited laugh), but they’re all crammed into the first act. This sadly means the rest of the film is filled with a bunch of groaners.

Special makeup effects are provided by the always-outstanding Robert Kurtzman, who gives the infected Black Friday shoppers an appropriately ferocious design, complete with long, sharp teeth a protruding white goo tongue that they use to infect others. It’s appropriately gnarly, but most of the budget seems to have been saved for the admittedly bananas, go-for-broke climax, leaving little room for the eye-popping gore effects we’ve come to know and love from the makeup maestro. Outside of a few arterial sprays, there’s little else here in the way of gore.

Both Sawa and Campbell look like they’re having a lot of fun, with Campbell getting to play the sleazy store manager who cares more about earning the corporate-demanded six figures than the safety of his employees in a monster apocalypse. Sawa has to play the straight man against a diverse cast of likable characters, but none of them do much to stand out with the exception of Peck’s Brian, who quickly becomes the character you love to hate and can’t wait to see die.

There’s a moment late in the film when Ken laments one of his dad jokes, but Black Friday turns out to be a dad joke of a movie: obvious, predictable and corny. It’s unclear how you squander a setting as rife with potential as a toy store, but Black Friday manages to do just that. This isn’t to say that it’s without merit, as anyone who wants to see Campbell and Sawa go toe-to-toe against Black Friday alien mutants will find something to enjoy here. It just won’t blow your socks off.

Screen Media is planning a day-and-date release for Black Friday in November.

An avid horror fan, Trace is especially fond of the slasher and aquatic horror sub-genres. After earning Bachelor's Degrees in Public Relations and Radio/TV/Film from the University of Texas at Austin in 2011, he began writing for the horror website Bloody Disgusting in 2014 before expanding to podcasting in 2019 with the Horror Queers podcast, which looks at horror films through a queer lens. He has since become dedicated to amplifying queer voices in the horror community, while also injecting his own personal flair into film discourse. Trace lives in Austin, TX with his husband and their two dogs.