What Was Greg Giraldo's Net Worth?

Greg Giraldo was an American stand-up comedian, television personality, actor, writer, producer, and lawyer who had a net worth of $150 thousand at the time of his death. Giraldo was probably best known for his appearances on Comedy Central roasts and other programs on the network, such as "Lewis Black's Root of All Evil" (2008) and "Tough Crowd with Colin Quinn" (2002–2004). Greg released the stand-comedy albums "Good Day to Cross a River" (2006) and "Midlife Vices" (2009), and he executive produced the "Midlife Vices" television special.

Greg Giraldo was born Gregory Carlos Giraldo on December 10, 1965, in The Bronx, New York City. He grew up in a Roman Catholic household in Queens with mother Dolores, father Alfonso, and younger siblings John and Elizabeth. His mother was from Spain, and his father, who worked for Pan Am, was from Colombia. Giraldo spoke Spanish fluently, and during his teenage years and early twenties, he played guitar in a band. Greg was a "perfect student, the kind who might fulfill an immigrant parent's dream that he become a doctor or a lawyer, or, better yet, an Ivy League doctor or lawyer. Or, best yet, a Harvard doctor or lawyer." He attended Manhattan's Regis High School, a prestigious Jesuit private school, graduating in 1983. Giraldo then enrolled at Columbia, earning a bachelor's degree in English in 1987. While attending Columbia, he joined the Psi Upsilon fraternity. Greg scored in the 99th percentile when he took the Law School Admission Test (LSAT), and he graduated from Harvard Law School with a J.D. degree in 1990.

After passing the bar exam, Giraldo worked as a lawyer at Skadden, Arps, Slate, Meagher Flom for eight months. In 1993, he provided pro bono services to fellow comic Jeffrey Ross after the future "Roastmaster General" was charged with inciting a riot at a Long Island comedy club where an audience member pulled out a realistic-looking toy gun. Jeffrey fought the man for control of the gun and was arrested, but Greg eventually got the case dismissed. Giraldo didn't enjoy practicing corporate law, and he said of leaving the profession, "I always wanted to do something creative. I've always had real trouble knowing what my actual desires and goals are. I've just been dragged along by fate. I can't even tell you why I thought to go to law school." In 1992, Greg began performing stand-up comedy and went on become a regular performer at Manhattan's Comedy Cellar and other comedy clubs. After Hollywood agents spotted him at the 1995 Just for Laughs festival, Giraldo was cast in the lead role on the ABC sitcom "Common Law," which aired four episodes in 1996. He regularly served as a panelist on "Tough Crowd with Colin Quinn" from 2002 to 2004, and he was also credited as a writer on the show. 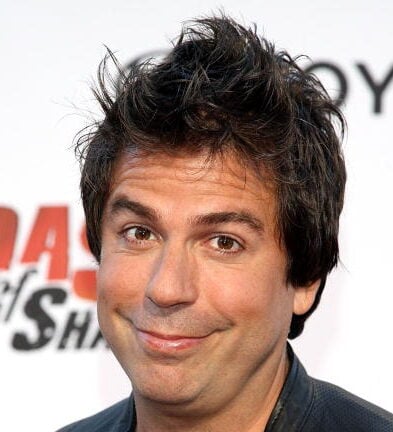 Giraldo had his own "Comedy Central Presents" specials in 2000 and 2004, and in 2005, he voiced President Theodore Roosevelt in the Sarah Vowell audiobook "Assassination Vacation." In 2006, Greg released his debut comedy album, "Good Day to Cross a River," followed by "Midlife Vices" in 2009; both albums were distributed by Comedy Central Records, and "Midlife Vices" aired as an hour-long special on the network. His first Comedy Central roast was 2002's "The N.Y. Friars Club Roast of Chevy Chase," then he took part in the roasts of Jeff Foxworthy (2005), Pamela Anderson (2005), William Shatner (2006), Flavor Flav (2007), Bob Saget (2008), Larry the Cable Guy (2009), Joan Rivers (2009), and David Hasselhoff (2010). He was featured in "Dave Attell's Insomniac Tour" in 2006, and in 2008, he was a regular guest on "Lewis Black's Root of All Evil." That year Giraldo also headlined Comedy Central's "Indecision '08 Tour, and in 2010, he performed at Tennessee's Bonnaroo Music and Arts Festival and was a panelist on NBC's "The Marriage Ref."

Greg's first marriage occurred when he was 23, and it ended in divorce two years later. On January 23, 1999, he married MaryAnn McAlpin, who formerly worked as a waitress at Caroline's comedy club. Greg and MaryAnn had three sons together, and Giraldo had a tattoo on his bicep that read "Maryann 1-23-99." He also had a tribal tattoo that contained the number 525, and comedian Jim Norton has said that the tattoo represented the first day that Giraldo sobered up, May 25th. Greg went to rehab for drug and alcohol abuse several times, and he once broke four bones in his hand after punching something while intoxicated at Gotham Comedy Club.

On the afternoon of September 25, 2010, Giraldo was scheduled to introduce Courtney Love at the 3rd Annual New York Recovery Rally, a concert meant "to celebrate the reality of recovery from addiction and offer hope to those who have yet to find recovery." Greg didn't show up for that event or for a scheduled performance at the New Brunswick comedy club The Stress Factory later that night. After police were notified, Giraldo was found unresponsive in his hotel room from what was believed to be an accidental overdose of prescription medication. EMTs took Greg to Robert Wood Johnson University Hospital, and he remained in a coma until September 29th when his family made the difficult decision to remove him from life support. Giraldo was 44 years old at the time of his death, and he was laid to rest at Good Ground Cemetery in Hampton Bays in Suffolk County, New York. His tombstone reads "Beloved Father / Always Loved / Forever Remembered."

The night of Giraldo's death, "The Daily Show with Jon Stewart" played a clip of his stand-up during the "Your Moment of Zen" segment and renamed it "Your Moment of Greg" that night. John Popper dedicated the song "The Mountains Win Again" to him during a September 29th Blues Traveler concert, and Comedy Central posted a video entitled "The Best of Greg Giraldo" on its website. On October 9th, the network aired the special "Comics Anonymous: Addictive Stand-Up," which featured comedians who had gotten sober, and dedicated it to Greg. A few days later, the series premiere of "Nick Swardson's Pretend Time" was dedicated to Giraldo. In February 2011, the benefit "The Big Time Comedy Show" at Manhattan's Beacon Theatre raised money for Greg's sons and for the charitable organization The Greg Giraldo Fund, which was founded by Giraldo's widow and his friend Joe Schrank. Benefits were later held at the Wiltern Theater in Los Angeles and the Gotham Comedy Club in New York City. In March 2011, the "Comedy Central Roast of Donald Trump" was dedicated to Greg, and the network aired the two-hour special "Give It Up for Greg Giraldo." The books "Dear Mrs. Fitzsimmons: Tales of Redemption from an Irish Mailbox" (Greg Fitzsimmons) and "Bonnaroo: What, Which, This, That" (Holly George-Warren) are dedicated to Giraldo, and in 2019, Matt Balaker and Wayne Jones published the book "Greg Giraldo: A Comedian's Story."

In 2010, Giraldo sold his five-bedroom, two-bathroom home in the Hamptons for $915,000. The original asking price was $1.05 million, and the home was on the market for close to four months before it sold. Built in 1991, the home sits on a .67-acre lot and includes a hot tub, heated pool, and dock.