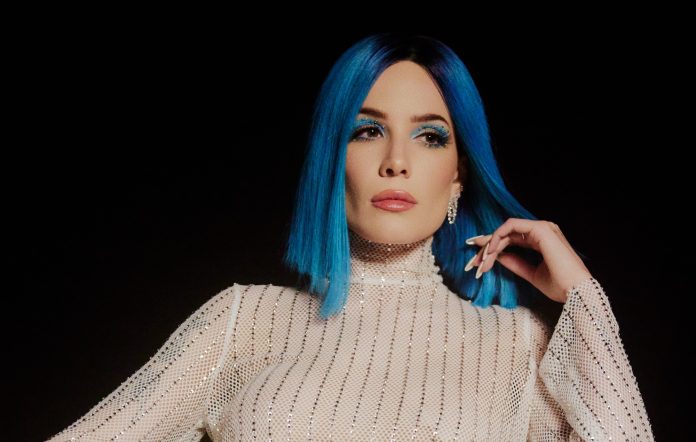 Halsey shares their love story in ‘So Good’ video

Halsey has given fans a look into their love story in the video for their new single ‘So Good’.

The song, which was released on Thursday (June 9), details the singer’s relationship with filmmaker Alev Aydin, whom they met when he was hired to write a movie about their life.

The accompanying video depicts that, with Halsey playing director and watching Aydin working with a female actor. As a scene is about to be filmed, they comment: “No, it’s not right yet” and walks onto the scene, observing Aydin and the actor closer.

Throughout the clip, both partners are seen with other people, before a projector starts to flick through home videos of the couple once they’d gotten together. Looking over at a male actor playing their partner, Halsey sings, “Do I think about the one who got away? / I know his name, I think about him every day,” before walking over to the real Aydin and kissing him.

Watch the video, which was directed by Aydin, below now.

“The film we created for ‘So Good’ really tells the full story of the song in the way I intended,” Halsey said in a press release. “Using the [Samsung] Freestyle [projector], Alev and I were able to share a glimpse of the way that we fell in love: watching romantic films together. But this time, the Freestyle is playing real home movies from our life together. For us, this makes ‘So Good’ come to life in a really special way that we’re so excited share with fans.”

The path to releasing ‘So Good’ was a rocky one for Halsey, who posted a video on TikTok in May telling their followers that their label wouldn’t let them drop it until she could “fake a viral moment” on the app.

“Basically i have a song that i love that i wanna release ASAP but my record label won’t let me…ive been in this industry for 8 years and ive sold over 165 million records…i deserve better tbh,” they wrote on a video.

They later continued to update fans about the status of new music in the video’s comment section, writing that Capitol Records “just said I have to post tiktoks; they didn’t specifically say ‘about what’ so here I am.”

‘So Good’ is the first release from Halsey since January, when they dropped an extended version of ‘If I Can’t Have Love, I Want Power’, their 2021 album produced with Trent Reznor and Atticus Ross.

In February, Halsey received the Innovation Award at the BandLab NME Awards 2022.