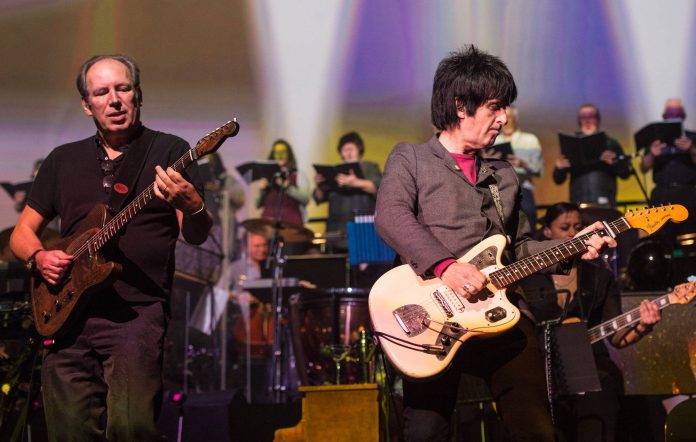 Hans Zimmer and Johnny Marr have shared two new tracks from their James Bond No Time To Die score – hear them below.

The tracks come ahead of the UK release of the long-awaited 007 film next week (September 30) and follows last year’s ‘No Time To Die’ title track, written with and performed by Billie Eilish.

“The countdown for #NoTimeToDie is on,” Zimmer wrote on Instagram. “We just released two new tracks from the @007 score.”

On October 1, the day after the film’s UK premiere, the full soundtrack will be available to buy and stream. The film then opens in the US a week later (October 8).

Listen to the two new tracks – ‘Matera’ and ‘Shouldn’t We Get To Know Each Other First’, below:

Marr said that he was “thrilled” to provide guitar on the track, explaining: “Growing up as a British boy in the late 60s, 70s, 80s, to me, the Bond theme should have guitar in it – especially the John Barry stuff.

As for the track itself, Marr praised Eilish’s efforts as “fantastic” and said the minimalist ballad created by Eilish and brother Finneas O’Connoll was a “brave” choice.

“When I heard the song, I thought ‘this is fantastic’. It’s very brave, being very minimalist. It’s her sound, and then the trick was to Bond-ify it,” he explained.

Watch the full video interview below:

No Time To Die: Johnny Marr on “thrill” of working with Billie Eilish on Bond theme

Reviewing Billie Eilish’s ‘No Time To Die’ upon its release last year, NME wrote: “Taking the understated road means that ‘No Time To Die’ is unlikely to be remembered as a top tier Bond theme in years to come; you also can’t help but wonder how an alternate version – channelling all of the artist’s unmistakable Eilish-isms – may have sounded.

“But regarded at face value, this is a solid effort that taps into Daniel Craig’s stealthy, solitary Bond with precision.”