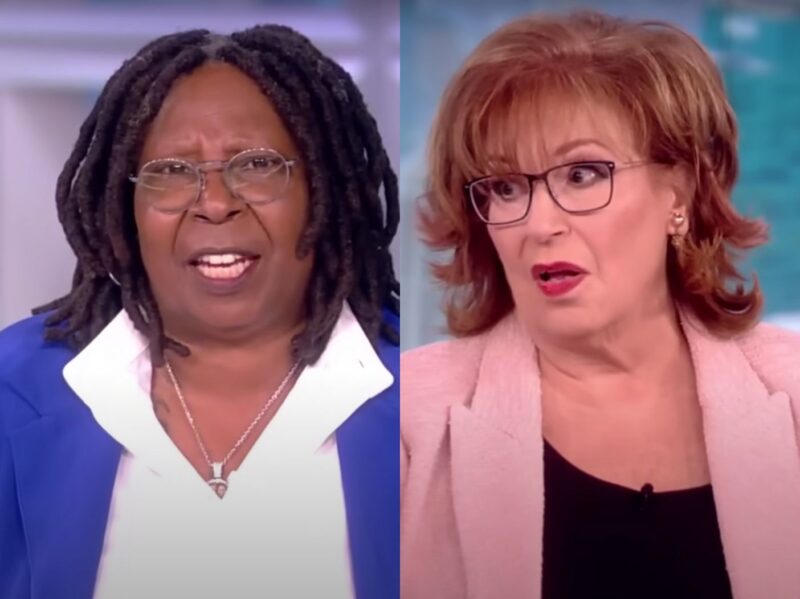 The veteran hosts are apparently losing their grip on ‘The View.’

Do Whoopi Goldberg and Joy Behar have targets on their backs? One tabloid claims the View co-hosts are in danger of being pushed out. Here’s the latest View gossip.

This week, the National Enquirer reports Whoopi Goldberg and Joy Behar are terrified of the dreaded conservative replacement for Meghan McCain. And sources say that former White House communications director Alyssa Farah Griffin is leading the pack of potential candidates. “The bosses want Alyssa. They’ve been highly impressed with her guest-hosting gigs, and it’s either her or somebody like her,” an insider dishes.

“The feelings is Whoopi and Joy—and the other co-hosts—have had it too easy. They’re not fighting enough and are just too agreeable.” But the tipster suggests Griffin is just what the show needs to shake things up. “Alyssa’s smart, she’s tough and she can handle pressure. She can win arguments—and boost those sagging ratings.”

But the source squeals that Griffin is “giving Whoopi and Joy the willies!” And even though Goldberg and Behar allegedly don’t get along behind the scenes, the insider insists they’re desperate to maintain the status quo. “Producers want more drama. It’s ratings gold, and with a new co-host to rattle cages that means Whoopi and Joy are in for more stressful times.”

Is Alyssa Farah Griffin Taking Over ‘The View’?

This report is an odd one in the way that it’s half-right and half-wrong. First of all, it’s totally possible that Alyssa Farah Griffin is going to take Meghan McCain’s spot on The View. According to Vanity Fair, both Griffin and former Trump staffer Stephanie Grisham are the top runners for the open spot on The View. In her lengthy interview with the outlet, Griffin made it clear that she was interested in the position.

And it’s no secret that the Griffin is pursuing the role of “odd man out” on the View panel. McCain played that role for years, leading to endless catfighting with her co-hosts. So, are Goldberg and Behar looking forward to filling that empty conservative panelist seat? Probably not. But as the most senior hosts, we’re sure there isn’t much that scares them.

The Tabloid On ‘The View’

But what it really comes down to is credibility, something that the National Enquirer is severely lacking. For example, the outlet’s past reporting on Whoopi Goldberg definitely leaves something to be desired. Back in November, the magazine published an insulting story about how Goldberg was “piling on the pounds.” Then the tabloid reported Goldberg planned to leave The View. And most recently, the publication alleged Goldberg’s View co-hosts wanted her fired. Obviously, the Enquirer is no authority anywhere the ladies of The View are concerned.