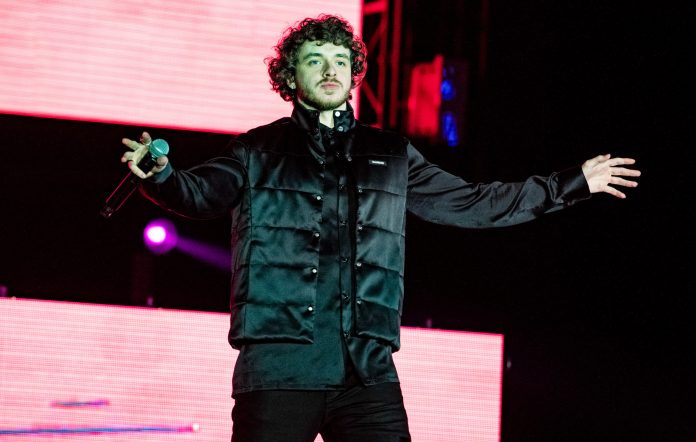 Jack Harlow has called for a police officer to be fired, after newly released footage showed the officer placing his hand around a woman’s neck outside one of his shows.

Harlow shared the footage to his Instagram profile on Wednesday (December 29), tagging the location as Atlanta (where he performed at the Coca-Cola Roxy a day prior). In the short clip, a young woman appears to be arguing with two police officers, telling them: “All I wanted to do was go to the Jack Harlow concert.”

She’s interrupted by one of the officers, who appears to put his hand around the woman’s neck and grab her by the arm. She yells at him to “stop”, before regaining composure and continuing her sentence. “Y’all are acting like I’m doing something bad,” the woman says, after the officer commands her to “stop yelling in my face”.

Take a look at the video below:

In a caption, Harlow noted that he was made aware of the incident just hours before he’d posted it, long after the concert had ended. He said he was “disgusted by that cop” and wanted to “make something good happen for this girl immediately”.

“I told the world to help me identify her so I could find a way to give her a hug and give her as many tickets to as many shows as she wants,” Harlow continued in his post. “But that’s not enough and its [sic] not a solution to a systemic issue that people who don’t look like me have to face.

“The next step is identifying this police officer and getting him unemployed as fast as we can. Assaulting a young woman and putting his hands on her neck is sickening. I look out in the crowd every night and see black women in my front row…screaming my lyrics, traveling to see me, supporting me, riding for me.

“I want this woman, and every black woman that supports me to know – I am so sorry. I want you to be protected and I want this guy to lose his job so fucking fast. I love you. Let’s find this officer.”

Though his identity remains unknown, the officer in question was later confirmed to be working with the Cobb County Police Department. In a statement offered to Billboard, a spokesperson for the department said it “takes any and all allegations of officer misconduct very seriously”.

“We are aware of the video snippet posted to Instagram involving our officer and a young woman outside the Coca-Cola Roxy,” their statement continued. “The incident is going through an internal review to get a full understanding of the entire incident before any potential action is taken.

Harlow has long stood against racism, saying back in July that he has a responsibility to set an example for white fans and rappers in Black culture. At the time, he reflected on his participation in a protest against the murder of Breonna Taylor, saying: “The things I was doing last summer, any fans who didn’t feel like criticising the police or were on the other side of things, I was going to weed them out.

“That could have been a moment for them to no longer be fans. But what is important is that I lead by example for all the white kids looking at me. This is what you do. You don’t just enjoy Black culture. You stand up next to Black people in a time of need.”

Harlow is currently on tour across the US in support of his debut album, ‘That’s What They All Say’. He’ll continue the run tonight (December 31) with a gig in Miami, performing as part of Miley’s New Year’s Eve Party. The event, hosted by Miley Cyrus and Pete Davidson, will be streamed live on NBC and Peacock.