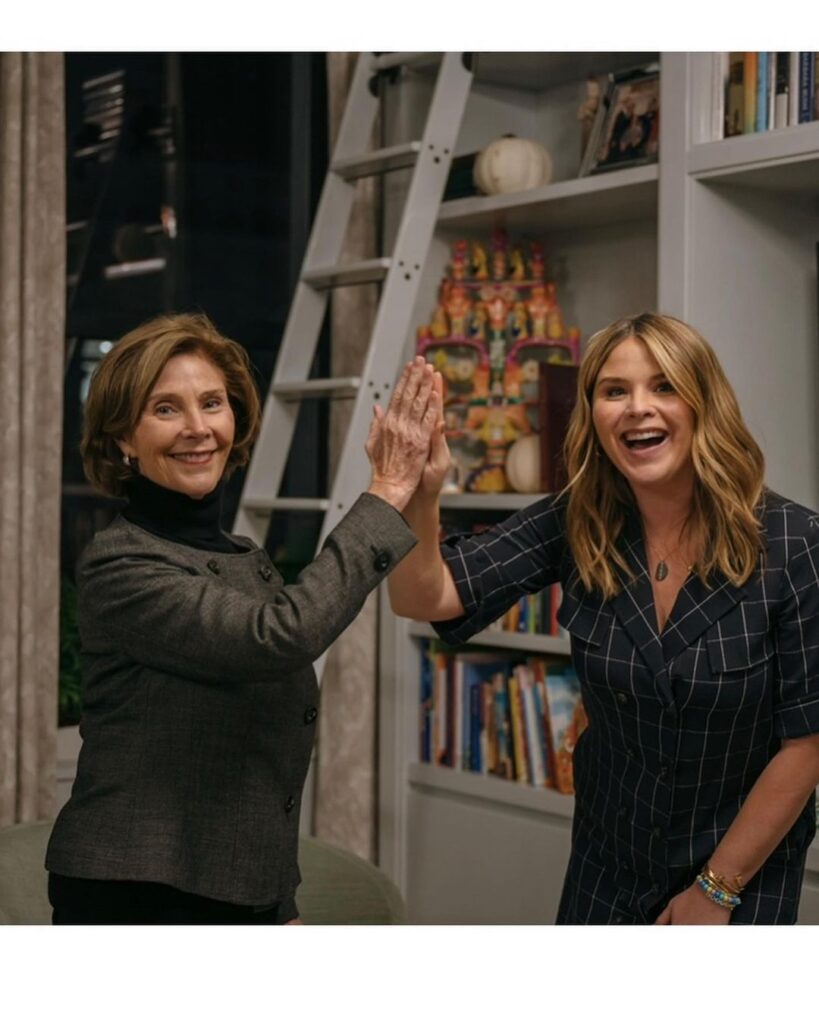 Jenna Bush Hager said her mother, former First Lady Laura Bush, did a lot to bolster her self-image growing up. But it was what she didn’t say that did it. Jenna said that Laura never discussed weight during her childhood. Not only did Laura not bring up Jenna or her twin sister Barbara’s weight, she didn’t criticize her own appearance in front of the girls either. And Jenna said it made such a difference, she’s carrying on the practice with her own kids.

Jenna Bush Hager is grateful to her mom, former First Lady Laura Bush, for never talking about her weight when she and her twin sister Barbara were growing up — and now she’s trying to do the same for her young daughters.

Hager, 40, mentioned her appreciation for her mom on Thursday’s Today with Hoda Jenna after talking about a recent outing to the grocery store where her daughters, Mila, 8, and Poppy, 6, spotted Hager on a magazine cover with a headline about her weight.

Mila “yells, ‘What are lbs.?’ And I go, ‘Oh Mila, nothing,’ ” Hager told co-host Hoda Kotb, which led Kotb to praise Hager for not teaching her daughter what it meant.

And Hager said that she “never” plans to talk to her daughters about her weight or theirs.

“I will never. And I had a mother that never [did], and I still felt like a chubby child. But it wasn’t because of her; I think it was because I was chubby,” she said.

Hager went on to praise her mom for abstaining from negative comments about her appearance.

“She never said things like, ‘Gosh, my hair looks terrible. Or, ‘I look terrible.’ Or ‘This dress looks bad on me,'” Hager said. “And somebody [once] said, ‘Well I can’t believe she never had that talk to herself.’ And I said, ‘No, I’m sure she said it to herself, but she never said it out loud in front of her girls.’ “

Good for Laura and good for Jenna. I did not have this safety growing up. Hell, I don’t have this now. As a result, though, I never discuss my kids’ weight, so hopefully the cycle will break. I’m saddened to hear that someone made Jenna feel bad even though her family didn’t bring it up. Kids can be cruel. And as we always say, the media is powerful. Jenna also said that Laura told her to give herself grace after she’d had her babies. Jenna was feeling bad about her post-pregnancy body, and it was Laura who reminded her she needed to allow herself the time it would take.

I need to pay attention to the second part of this story, the part about not criticizing my appearance around my kids. I forget that just because I don’t criticize them doesn’t mean they don’t pick up on it. I know Jenna and Barbara are really close to Laura and I can see why. I always think back to Laura asking them to come to the White House to show Malia and Sasha Obama around during a visit with Michelle Obama so the girls would feel more comfortable. I think Laura understood a lot about mothering. I could lean a few things from her.