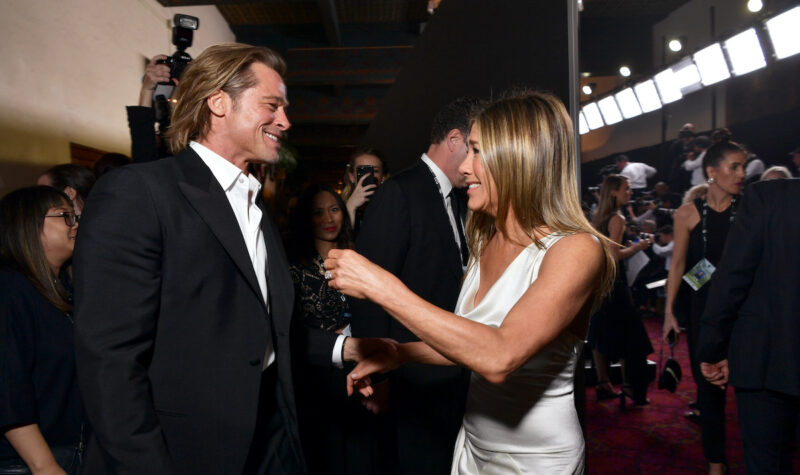 A source says that Aniston is ready for romance again.

Have Jennifer Aniston and Brad Pitt finally reunited? One tabloid claims the former spouses are giving romance another shot. Let’s take a look at this wild rumor.

The most recent edition of In Touch reports Jennifer Aniston is ready to get back into the dating game, and she’s starting in the City of Love. “She’s definitely putting herself out there,” an insider dishes. “It’s one of the most romantic cities in the world. Her friends told her to go to the bars and cafes and try to talk to guys. She agreed because, for the most part, she can remain incognito there—people aren’t jumping all over her— and she actually met a few really nice guys.”

But the outlet reminds readers that Aniston’s ex-husband Brad Pitt was also spotted in the city. The magazine previously reported that they were giving their romance another shot. “They had an amazing time, and there’s always a chance with them that they’ll reunite permanently,” the tipster reveals. “But for now they’ve decided to keep things simple and just have fun. They’re in no rush to make anything exclusive.”

Jennifer Aniston On The Prowl In Paris?

This tabloid seems to either have a short memory or it doesn’t want to own up to its own misreporting. Last month, the tabloid didn’t just suggest that the former married couple might meet up; the magazine claimed Aniston and Pitt were living together in a Parisian penthouse and would be for at least six months. Clearly, the outlet realized that the idea was completely ludicrous when Pitt inevitably left Paris and returned to the States. So, we’re guessing this report is the magazine’s way of backtracking.

But let’s take a look at the meat of this story. We aren’t just casting doubt on the idea of Aniston dating Pitt—we seriously doubt she’s looking for a man in Paris at all. The magazine so briefly brushes over this simple fact: Aniston was in Paris for work. She was in the city to film Murder Mystery 2, not to chase down Mr. Right. While it’s possible that Aniston will start dating again soon, we doubt it’s going to be in Paris since she just recently bid the city “au revoir.”

The Tabloid On Jennifer Aniston

We’ve learned to take In Touch‘s reporting on Aniston with a grain of salt. Not too long ago, the outlet reported that Aniston was caught in a bitter feud with Reese Witherspoon. Then the magazine accused Aniston of making shady influencer deals. So, we’re definitely skeptical of anything the tabloid has to say about Jennifer Aniston.