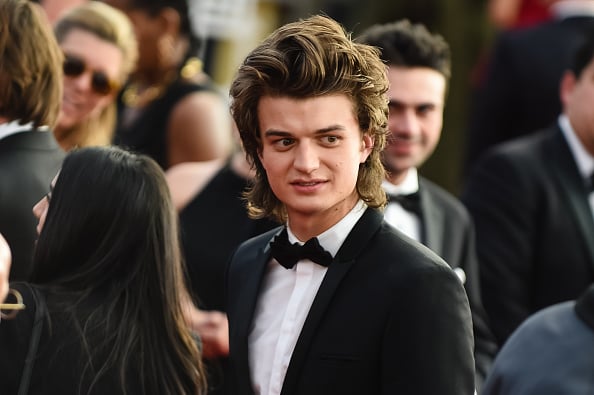 What is Joe Keery's Net Worth and Salary?

Joe Keery is an American actor and musician who has a net worth of $4 million. He is best known for his role as one of the main characters on the popular Netflix series, "Stranger Things."

Joe Keery is also a member of the band Post Animal. The band formed in 2014 and released their debut studio album "When I Think of You in a Castle" in 2018. In 2020 they released "Forward Motion Godyssey." The band released the EP "Post Animal Perform The Most Curious Water Activities" in 2015.

Keery was born on April 24, 1992 in Newburyport, Massachusetts. His father, David, worked as an architect, while his mother, Nina, worked as an English professor. He grew up with this four sisters – Caroline, Lizzy, Kate, and Emma – and is the second of the five.

Keery attended River Valley Charter School, which is a Montessori elementary and middle school that his mother helped establish. He then attended Newburyport High School. When he was young, he participated in Theater in the Open, a performing arts camp at Maudslay State Park. However, his primary first experiences with acting began in high school, in large part encouraged by his older sister.

After graduating from high school, he enrolled at The Theatre School at DePaul University. He completed his Bachelor of Fine Arts in Acting and graduated with his degree in 2014.

After completing his university studies at DePaul, Keery began auditioning for commercials, small television roles and films. During this time, he also worked waiting tables. He appeared in commercials for Domino's and KFC and also has guest roles in "Empire" and "Chicago Fire." The first feature-length film he landed was the indie film by Stephen Cone, "Henry Gamble's Birthday Party" in 2015.

His breakout role came the following year, in 2016, when he was cast as Steve Harrington on the Netflix series, "Stranger Things," a science fiction horror drama show set in the 1980s. The role of Steve was a recurring one of the show's massively successful first season, which premiered in July of 2016, and then became a main role from the second season onward, which premiered in October of 2017. The role was originally intended to only last throughout the first season by Keery and his character proved to be quite popular. He then reprised his role in the third season, which premiered in July of 2019. Keery, as part of the cast, earned a Screen Actors Guild Award in the category of Outstanding Performance by an Ensemble in a Drama Series in 2017. The cast was again nominated in the same category in 2018.

In addition to acting, Keery is also a musician though he has made considerable effort to the keep the two pursuits separate. He is one of the members of the Chicago-based garage and psych-rock band, Post Animal, where he plays the guitar. In October of 2015, the band released their debut full-length album. They followed it up with their second album, "When I Think Of You In A Castle," in April of 2018. In addition to playing the guitar on the album, he also sang back-up vocals. Keery made the decision to stop touring with the band in 2019 after fearing that the association with "Stranger Things" would eventually hurt the band.

The same year, in July, he self-released the single "Roddy" under the solo artist moniker, Djo in an attempt to distance himself for instant notoriety. A month later, he released a second single, "Chateau (Feel Alright)." A month following that, in September, he released his debut album as Djo called "Twenty Twenty." The following year, in September of 2020, released a new single entitled, "Keep Your Head Up," which he promoted on Reddit and in a conversation with Wayne Coyne of The Flaming Lips. He has also since released music under the name "Cool Cool Cool."

Keery has a devoted social media following and has developed a reputation for being down to earth and likable. He began dating actor Maika Monroe after the two met in 2017 at a party in Los Angeles. He is not a big drinker or smoker and has cited bread pudding as his biggest vice.