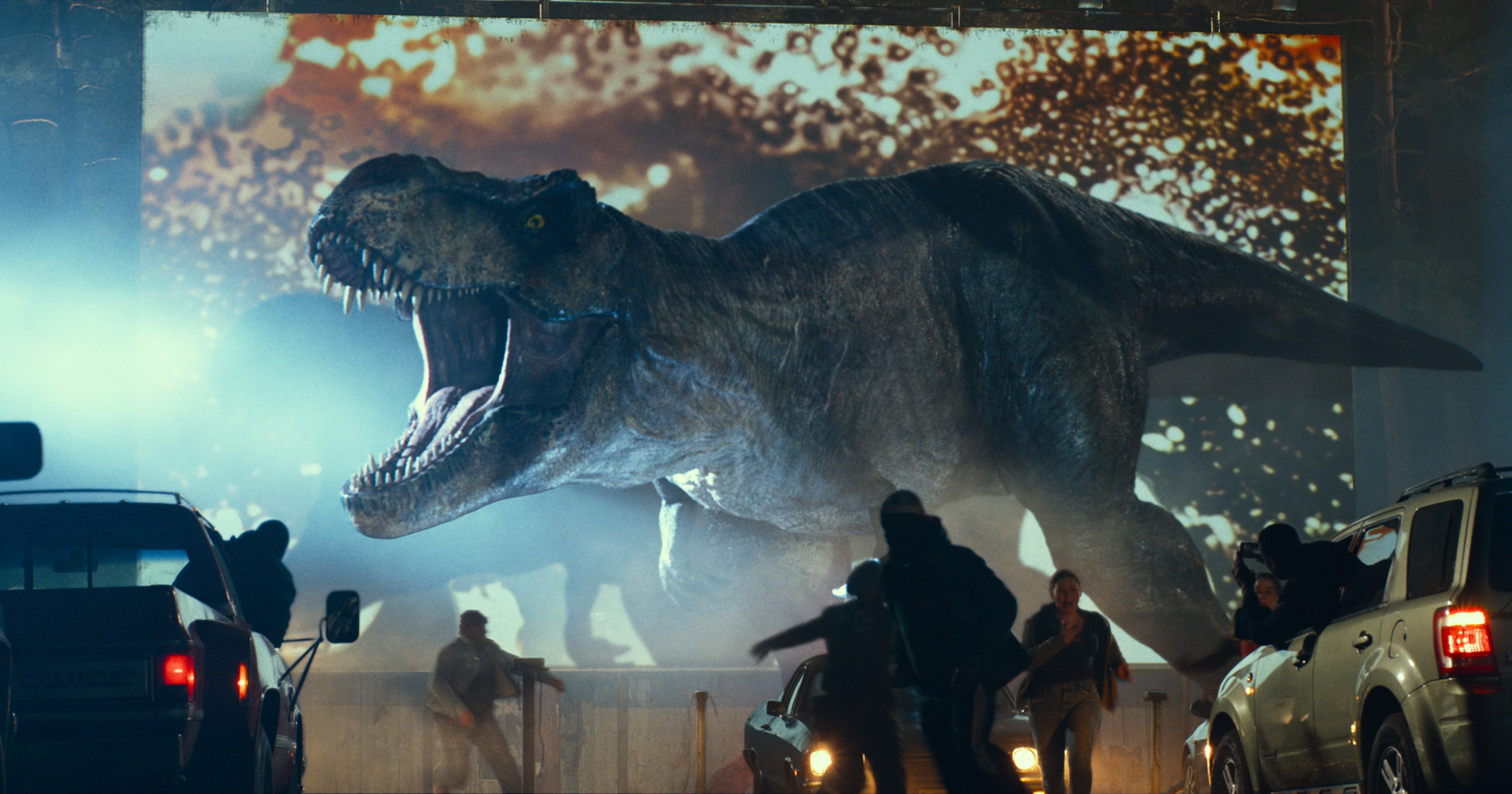 Released in 2018, Jurassic World: Fallen Kingdom set the final film in the Jurassic World trilogy up for success, coming to a close with all the surviving dinosaurs from Jurassic World – plus their DNA – making their way off Isla Nublar and being unleashed onto the mainland. Sure, Steven Spielberg’s The Lost World: Jurassic Park brought a T-rex to San Diego back in 1997, but Fallen Kingdom promised the first movie under the franchise umbrella that would full-on deliver on a dream premise for the fans, forcing dinosaurs and humans to co-exist.

So where does Jurassic World Dominion go wrong? For starters, Dominion makes the bizarre decision to skirt around the issue presented in the final moments of Fallen Kingdom, instead jumping four years into the distance to pick up in a world where dinosaurs, well, they’ve become little more than a minor nuisance to the humans they now share an ecosystem with. Massive dinos are herded up like horses and the situation is largely under control at the start of Dominion, the world-changing problem created by the previous sequel solved off-screen in the years between the two films. And aside from brief snippets of dinosaurs running amok and even claiming human lives – all of which are relegated to quick flashes in the film’s opening sequence – Dominion instead chooses to tell a whole different story entirely.

A story primarily centered on crop-eating locusts. And a little girl with strange DNA.

If Jurassic World: Fallen Kingdom was the “Last Jedi” of the Jurassic World franchise, saying goodbye to the past – in this case, literally blowing up Isla Nublar with a volcanic explosion – and introducing fresh new concepts – gothic dino horror! dinosaur auctions! human clones?! – then Jurassic World Dominion is very much the “Rise of Skywalker” of the prehistoric saga, walking back some of those more unique ideas and instead slipping back in past comfort zones. The entire second half of Jurassic World Dominion slides so far backward into nostalgia that it takes place in what is essentially yet another dinosaur park, making Jurassic World Dominion feel more like… well… the original Jurassic Park, than anything else.

And yes, that of course includes the return of legacy trio Laura Dern, Sam Neill, and Jeff Goldblum, who mostly just exist in this movie to remind you of the magic they created together back in the 1990s. All of them are safe from any sort of real danger, of course, and their characterizations never dare paint outside already established lines. The bulk of Jurassic World Dominion is nostalgic comfort food, the sort of movie you’d expect from the Jurassic World trilogy’s debut rather than its third and final installment. It takes the “legacy sequel” approach that Hollywood studios love so much right now, more interested in reminding you of past glories than actually paving any sort of new ground for the franchise’s evolution.

In some ways Jurassic World Dominion is precisely the experience that was advertised to consumers, in fairness, but in others it’s a film that seems to be completely at odds with the direction the franchise seemed to be taking just a few short years ago. If you go back and watch the trailers for Jurassic World Dominion after you see the movie in theaters, you’ll probably be struck by the complete and total erasure of the film’s actual storylines. The various marketing materials for Dominion strongly suggested that the film was very much continuing from the game-changing point that Fallen Kingdom left us at, with the human characters of the franchise coming together to save the World from a Jurassic threat. There’s even a scene of a T-rex rampaging through a drive-in theater that outright promises a certain kind of mayhem, a scene that never actually appears in the movie. It pops up in a TV spot for Progressive Insurance, oddly enough, but never does a T-rex appear on the mainland in the actual movie itself. Instead, we’re simply *told* that humans have had trouble getting the T-Rex problem under control, but we’re never actually *shown* the threat the apex predator posed.

And that pretty well sums up the entire approach of Jurassic World Dominion, a summer blockbuster that somehow manages to turn Fallen Kingdom‘s all-time great sequel tease into a relatively boring experience all around. The film comes alive in short bursts, with only an extended chase sequence in Malta coming close to delivering on the thrills promised by the premise. We see dinosaurs running through the streets of Malta and jumping from rooftops, chasing after Chris Pratt‘s motorcycle-riding Owen Grady and even taking a minute to take a bite of some unlucky tourists in the area. It’s one hell of a sequence, unlike anything we’ve seen from the Jurassic Park/Jurassic World franchise up to this point. The bulk of the movie, however, returns the franchise to business as usual, its main villain a new version of John Hammond, its main location a new version of Jurassic Park, and even its final climactic battle sequence playing out virtually the same as the one we already saw in Jurassic World. The film’s final coda attempts to fully drive home themes the movie never actually bothered to explore, Jurassic World Dominion seemingly book-ended by scenes from another movie. A movie about dinosaurs and humans co-existing. A movie it would’ve been great to see.

And then we have the crop-eating locusts, super-charged with dinosaur DNA and threatening to devour the entire planet’s food supply in short order. It’s the locust threat that serves to bring Ellie and Alan back into the mix in under-whelming fashion, the handiwork of Lewis Dodgson and Dr. Henry Wu. It’s hard to imagine a team of well-paid writers sitting around a table and conjuring up crop-eating locusts as a major storyline in a movie about dinosaurs and humans sharing the world, and it’s equally hard to imagine anyone signing off on such an idea at this point in the franchise. Did we really need an additional threat on top of the one already present? Did we really need an additional reason for Ellie and Alan to be compelled back into action? Jurassic World Dominion convolutes a simple premise with storylines that are far less compelling than the main one, bloating the runtime and ultimately focusing on anything and everything other than the literal JURASSIC WORLD we’ve been invited into.

While the locusts are the main problem the legacy characters are tasked with taking on, Owen Grady and Claire Dearing are forced to play hero once more when their surrogate daughter, Maisie Lockwood, is kidnapped by the same men who orchestrated the locust plague. As silly as the locust storyline turns out to be – and it’s another threat in the movie that mostly gets the off-screen treatment – the Maisie storyline is no better, the creative team walking back compelling past reveals about the character in an effort to give this movie an engine to run on. Remember how Fallen Kingdom revealed that Maisie is actually a clone of her deceased mother, created by the same men behind the original Jurassic Park? It was a wild new area for the franchise to explore, providing Maisie with a unique connection to the dinosaurs that were similarly created in a lab by humans who never stopped to think whether or not they should. But Dominion manages to find a way to walk that reveal back, the film instead tasking BD Wong with delivering a monologue that rewrites the character entirely.

Maisie, we learn in Dominion, isn’t actually a clone created in a lab. Her mother gave birth to her before she passed away from a rare illness, we’re now told, but not before her mother was able to essentially rewire her DNA and make her immune from the hereditary illness that was claiming her own life. Why do the writers rob Maisie of her most unique quality? Purely because they needed a way to solve the locust problem they created. Much like Ellie in The Last of Us, Maise’s modified DNA becomes the cure-all for the locust plague, with Dr. Henry Wu ultimately using her DNA to wipe out the locusts he helped create. The entire film is built around this brand new problem and this all-too-convenient new solution, and quite honestly both of the ideas are as bad in execution as they are on paper. Remember when I said that Dominion is the “Rise of Skywalker” of the franchise? That’s the case right down to Maisie becoming the franchise’s Rey, a character previously revealed to be one thing only for that to be entirely wiped off the slate when it came time to make the next sequel. It’s hard not to wonder if Dominion‘s decision to erase the divisive “human cloning” storyline was due to fan backlash when Fallen Kingdom came out, but all I can say is it sure felt that way to me.

It’s as if all of Fallen Kingdom‘s big new ideas for the franchise were scrubbed from Dominion almost entirely, a movie that instead brings back past characters, relives past glories, and slips back into comfortable scenarios. It’s a problem that has reared its ugly head for a handful of big Hollywood franchises in recent years, from Star Wars to Halloween. Why do something new when you can just do something old again? Why blaze new paths with existing franchises when you can just pander to past nostalgia? Why make a movie about dinosaurs and humans co-existing on the mainland when you can just skirt around those bold new avenues to explore and instead recycle the same tired material we’ve already seen?

The answer, of course, is that Hollywood is making sure-thing movies that they know audiences will play A LOT OF MONEY to see, and Jurassic World Dominion is indeed on its way to making A LOT OF MONEY in theaters. General audiences also seem to be responding quite well to the movie even if critics are not, so perhaps Hollywood is only doing what Hollywood needs to be doing to stay alive. But even still it’s hard not to be incredibly disappointed by a movie like Jurassic World Dominion, a film about evolution that fails to evolve anything about the long-running franchise. It’s a step backwards rather than a step forwards, and a limp finale to a trilogy that seemed primed and ready to step into the future. Those steps were already taken by JA Bayona with Jurassic World: Fallen Kingdom, much the same way Rian Johnson took them with The Last Jedi, but it seems Hollywood is intent on always making sure we end up right back where we started. And so Laurie Strode continues to battle Michael Myers. Emperor Palpatine continues to wreak havoc in a galaxy that continues to shrink down its scope. And Alan, Ellie and Ian continue to be trapped inside Jurassic Parks.

I don’t know about you, but I’m ready for something different.