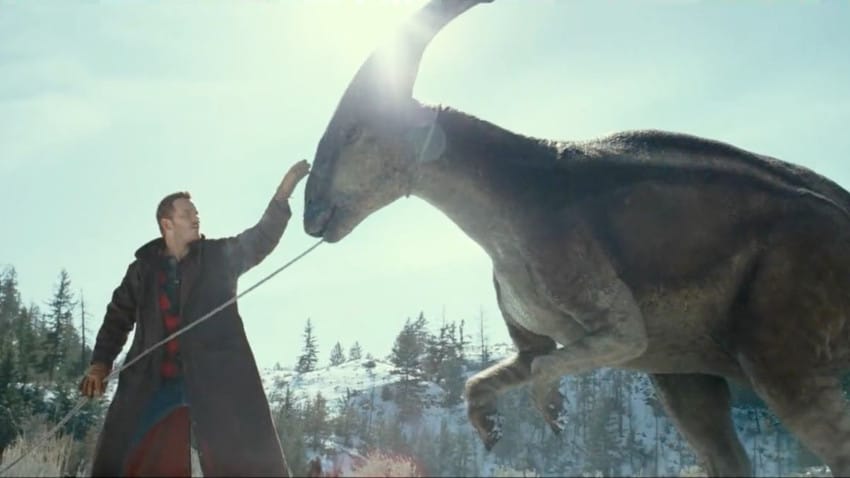 PLOT: Taking place four years after Fallen Kingdom, Dominion finds Owen Grady and Claire Dearing trying to protect Maisie Lockwood from those that mean her harm. Yet they are about to face off against a very deadly new species that is destroying the world’s food supply. Thankfully, they are getting help this time around from a few familiar faces.

REVIEW: The dinos are back, and this time they brought friends. In an age when we are seeing a critically acclaimed new sequel to Top Gun, a collection of Spider-Men, and numerous other familiar faces, it’s become a damn smart way to sell a flick. Thus, we have Jurassic World: Dominion. Look, there are going to be folks that will eagerly open up to a new adventure, and I don’t blame them, especially with the return of fan favorites Sam Neill, Laura Dern, and Jeff Goldblum – who also came back for 2017’s Fallen Kingdom. Dominion also continues the story of the dino wrangler himself, Chris Pratt, and the lovely Bryce Dallas Howard. You’ll find other fan treats and recognizable faces, including a world of massive beasts ready to devour whatever food is in their path. Welcome to Jurassic World: Dominion.

Dinosaurs have become a bit commonplace in the world. Thankfully, human beings have learned to live with it – well, sort of. There is something deadly happening aside from chomping monsters running around everywhere, however. One group of particularly nasty creepies begin to cause true havoc in the world, and they could destroy our food supply chain. Mixed up in all of this is the young clone from Fallen Kingdom, Maisie Lockwood (played by Isabella Sermon), as well as Owen Grady (Pratt) and Claire Dearing (Howard), who have taken on parental duties to protect her. For OG fans, Ellie Settler (Dern) and Alan Grant (Neill) get in on the action and are given information that Biosyn is up to no good from a reliable source named Ian Malcolm (Goldblum). It all comes together for an entertaining finale that brings on the spectacle of an apex predator battle.

If you’ve been a fan of the direction of Jurassic World, you may enjoy this a bit more than I did. As the nearly two-and-a-half-hour runtime played on, the overly convoluted storyline became slightly tiresome. When it comes to the original JW cast, including Pratt, Howard, and Sermon, it presented an interesting idea. Humans and dinosaurs have to interact in this modern world.  The same is true for the return of Dern and Neill. While this concept may be intriguing, putting it all into a blender created an occasionally, overloaded and slow-moving action flick. It’s one that was sure to hit all the beats covered in the previous films but to a fault. And while the dinos can be scary at times, the real monsters are the human villains. You know, like always. Trust me when I say that you will know them the second they show up. I won’t spoil much about that here.

Let’s get back to good old nostalgia, shall we? Well, you’ve certainly got that in spades. And it was enjoyable to see the original cast return, and they certainly add charm. However, it fades fast as the predictable nature comes to play. With a group of actors this large, and so many to care about, it’s clumsily handled. All these characters have so many “close calls,” that it becomes a bit silly. With that kind of lucky streak, they should play the lottery. That’s not to say it’s not at all exciting. Like all Jurassic sequels, you’ll find a few thrilling moments scattered throughout. Perhaps the best one comes when Claire and Owen try to escape a pack of dinosaurs after the evil Soyona Santos (Dichen Lachman) puts a “target” on them. An enjoyable moment that impressively builds a decent amount of thrills and tension.

One thing that Dominion has to offer is attempts at humor and guffaws and lots of it. While the entire franchise has balanced laughs and scares throughout, many of the jokes fell flat here. Oftentimes, the humorous element would put a damper on the action set pieces. Along with the fact that these folks barely get a scratch no matter what kind of danger they are in, there rarely seems to be any stakes in the proceedings. Even still, Goldblum is always a treat, and he brings his goofy charisma easily back every time Malcolm is on-screen. Yet the characters that are seemingly inspired by previous ones in the franchise, don’t have quite the same effect.

This third chapter in the Jurassic World portion of the franchise is slightly enlivened by the inclusion of Dern, Goldblum, and Neill. Once again, directed by Colin Trevorrow, who shares screenplay credit with Emily Carmichael – her first script in the series. It will certainly excite those looking for a dumb fun popcorn flick, one that you don’t have to think too much on. And that’s not the worst thing to be. Yet, it’s disappointing to see the wonder of the original film brought down to that. Remember the first time Ellie Sattler and Alan Grant saw the pack of beasts in the original Jurassic Park? That magic is completely missing from what we have here.  Dominion may not be the worst blockbuster of the year, far from it, but sadly, it’s a bit too dull to fully resonate alongside Spielberg’s classic.

If you want to see dinosaurs, at least you’ll enjoy that. Prehistoric creatures doing their thing are the best part of Jurassic World: Dominion. Much of the time you have more compassion for them than you do for many of the human characters. Maybe that’s all the time. Unfortunately, the movie as a whole feels so obvious and familiar. Even still, you’ll find moments that work thanks to the nostalgia factor from the original cast. And even the worst sequels in JP and JW have a moment or two that shine. Yet Dominion avoids going anywhere new or inventive and just becomes a greatest hits of what’s come before. Dominion roars into theatres this Friday at a theatre near you. 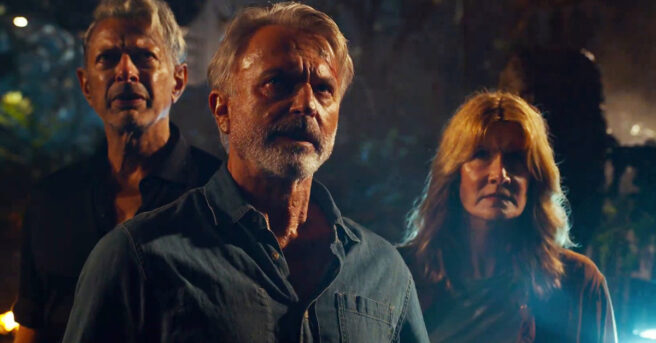