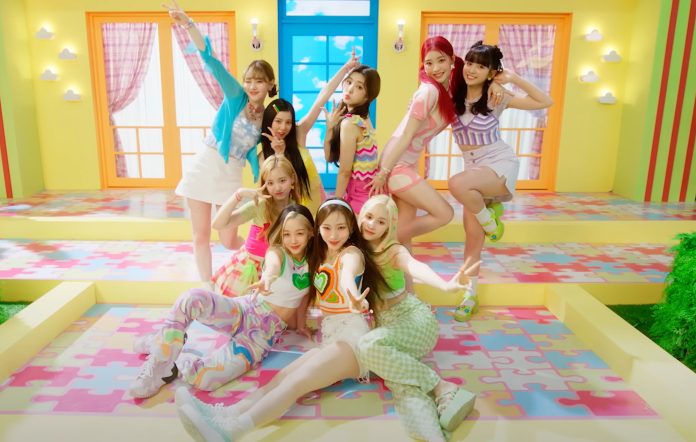 Kep1er usher in the summer with music video teaser for ‘Up!’

Kep1er have release a music video teaser their forthcoming single ‘Up!’.

In the clip, the members of the K-pop girl group huddle together for a self-timer photo against the backdrop of a elaborate, brightly coloured set made to recall a beach house. Later, montages of Kep1er enjoying the summer with cocktails by the pool and popsicles, as well as goofy photobooth moments flash by.

‘Up!’ is set to be the title track off Kep1er’s sophomore mini-album, ‘Doublast’. Both the track and the record are due out on June 20 at 6pm KST.

‘Doublast’ is set to be Kep1er’s first release of 2022, and the much-anticipated follow-up to their debut mini-album ‘First Impact’. That release had sold almost 400,000 copies in South Korea, according to the Gaon Music Chart, and featured the single ‘Wa Da Da’.

The girl group were first announced to be returning with music shortly after they concluded their run as contestants on Queendom season two, the Mnet reality TV series which the girl group had competed in against other female K-pop acts such as Hyolyn, VIVIZ, WJSN, Brave Girls and LOONA.

As part of the voting process to determine the final Queendom 2 winner, the contestants had released new original songs in advance in order for the steams to be counted towards the contestants’ final scores. Kep1er’s release was the song ‘The Girls (Can’t Turn Me Down)’, which helped them come in fifth place on the show.

Earlier this year, in an interview with NME, the girl group spoke about how they are determined to become “the best girl group” of the next generation. The girl group also looked back on the bumpy journey to their debut and discuss their love for BLACKPINK, IU and Girls’ Generation.