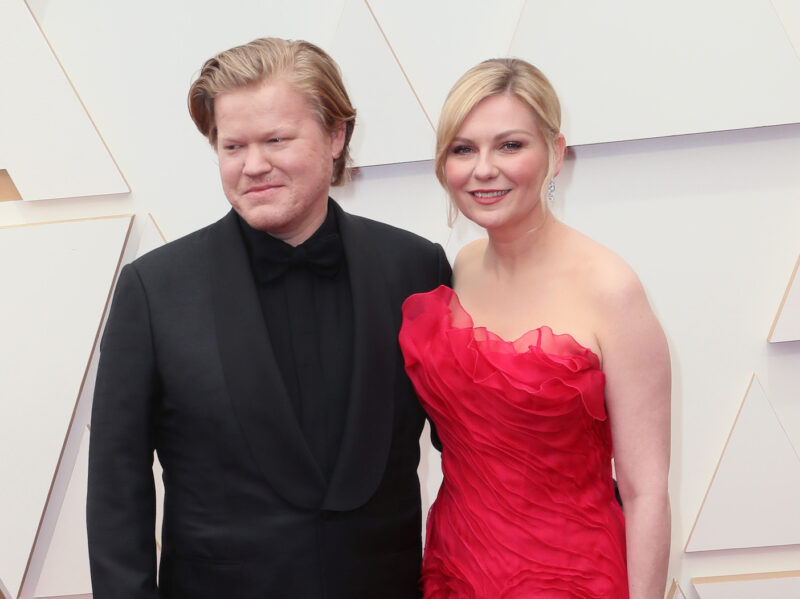 Plemons’ star status is skyrocketing, but his wife may have a warning.

Is Kirsten Dunst desperately trying to keep Jesse Plemons out of trouble? One tabloid claims Plemons is cozying up to an infamous Hollywood heartthrob, and Dunst isn’t happy about it. Let’s check in on the Power of the Dog co-stars.

This week, Star reports Kirsten Dunst is getting nervous about her husband Jesse Plemons’ latest project. As the Fargo actor has been busy filming Killers of the Flower Moon with Leonardo DiCaprio, sources say Dunst is worried about DiCaprio’s bad habits rubbing off on Plemons. “Leo may have a girlfriend [model Camila Morrone] but he’s still out all the time in questionable environments, and Kirsten’s worried he’ll lead her good guy down the wrong path,” an insider confides. The magazine notes that things are really good for Dunst and Plemons right now.

The couple originally met while filming Fargo together in 2015, and they now share two sons. Dunst and Plemons also co-starred in the film The Power of the Dog which landed each of them their first Oscar nominations. And now that Plemons has a starring role in Martin Scorsese’s latest film, Dunst is apparently terrified that DiCaprio is going to ruin everything. “Kirsten has nothing against Leo per se, but she gave up that partying lifestyle years ago and likes things as they are for her and Jesse,” the tipster adds. “Rest assured, she’s going to reel Jesse back in if Leo pushes the boundaries!”

While this tabloid is clearly concerned about preserving Jesse Plemons’ “good guy” reputation, we have no reason to believe Kirsten Dunst is. First of all, while Leonardo DiCaprio has certainly earned his reputation with his long-standing refusal to date anyone over the age of 25, we have no reason to believe he’s ever pressured anyone in his life to follow his lead. DiCaprio isn’t so desperate for friends that he’s trying to corrupt his unsuspecting co-stars.

Furthermore, DiCaprio hasn’t been caught red-handed at many wild parties in recent years. That’s certainly apparent from how the outlet uses a photo from 2015 to illustrate DiCaprio’s party-boy tendencies. But the most recent photos of DiCaprio that we could find show him having a wholesome beach day with Morrone and their dog. Honestly, it doesn’t seem like there’s really anything for Dunst to worry about.

And finally, Dunst and Plemons have been inseparable since meeting each other in 2015. Plemons’ upcoming role in Killers of the Flower Moon is an amazing opportunity, so it’s just bizarre to suggest Dunst is anything less than supportive of her husband.

The Tabloid On Leonardo DiCaprio

This story is a bit ironic since Star has played a part in maintaining Leonardo DiCaprio’s salacious reputation. Back in 2020, the outlet reported DiCaprio was flirting with Jennifer Lawrence on the set of their movie. Then the magazine alleged Camila Morrone had a “bun in the oven.” And more recently, the publication claimed DiCaprio ordered Morrone not to visit him on set. Obviously, Star isn’t a reliable source anywhere DiCaprio is involved.