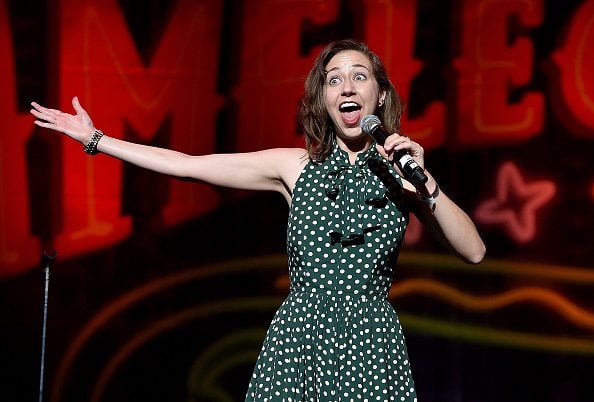 What Is Kristen Schaal's Net Worth?

Kristen was a commentator on "The Daily Show" from 2008 to 2016, and she voiced Delirium in the 2021 Audible release of Neil Gaiman's "The Sandman: Act II." Schaal also produced her one-hour Comedy Central special, "Kristen Schaal: Live at the Fillmore" (2013), and the TV movie "Supanatural" (2013), and she directed the "Gender Friender" episode of "The Last Man on Earth" in 2017.

Kristen Schaal was born Kristen Joy Schaal on January 24, 1978, in Longmont, Colorado. Her mother worked as a secretary, and her father was a construction worker. Kristen and her older brother, David, grew up on a cattle ranch near Boulder, and she graduated from Skyline High School in 1996. Schaal then attended the University of Colorado for a year before transferring to Northwestern University in Chicago. After graduating from Northwestern, she moved to New York City to pursue a career in comedy. In 2005, Kristen was featured in the "New York" magazine article "The Ten Funniest New Yorkers You've Never Heard Of." In a 2010 interview with "The Guardian," Schaal spoke about the "New York" article's impact on her career, stating, "That turned out to be my biggest break, because the people from HBO Comedy Festival started to come see me in the clubs. From that I got spotted for 'Flight Of The Conchords.'"

Kristen was named Best Alternative Comedian at the US Comedy Arts Festival (2006), Best Female Stand-up at the Nightlife Awards (2006), and Best Female Stand Up Comedian at the ECNY Awards (2007), and she won the Barry Award at the 2008 Melbourne International Comedy Festival for the show "Kristen Schaal As You Have Probably Never Seen Her Before." Around this time, Schaal appeared on Comedy Central's "Live at Gotham" (2006) and began co-hosting the variety show "Hot Tub with Kurt and Kristen" with Kurt Braunohler in Brooklyn (the show moved to Los Angeles in 2013). Before getting her big break on HBO's "Flight of the Conchords," she appeared in the films "Kate Leopold" (2001), "Poster Boy" (2004), "Adam Steve" (2005), "Delirious" (2006), and "Norbit" (2007), had a recurring role on "The Education of Max Bickford" (2001–2002), and guest-starred on "Law Order: Special Victims Unit" (2004), "Six Degrees" (2006), and "Conviction" (2006). From 2007 to 2009, Kristen played superfan Mel on the critically-acclaimed sitcom "Flight of the Conchords," appearing in all but one of the show's 22 episodes. In 2007, she also spent a month as a writer and consultant on "South Park" and guest-starred on "Law Order: Criminal Intent," "Human Giant," "Mad Men," and "How I Met Your Mother."

In 2014, Kristen played Amanda Simmons on Hulu's "The Hotwives of Orlando" and guest-starred on "Glee." The following year, she began starring as Carol Pilbasian on the Fox series "The Last Man on Earth" alongside Will Forte, who also created the show. "The Last Man on Earth" aired 67 episodes over four seasons and earned Schaal an EWwy Award nomination for Outstanding Supporting Actress in a Comedy Series. Kristen co-starred with Melissa McCarthy and Kristen Bell in 2016's "The Boss," then she appeared in the films "All Nighter" (2017), "Literally, Right Before Aaron" (2017), "Austin Found" (2017), "Boundaries" (2018), "My Spy" (2020), and "Bill Ted Face the Music" (2020). In 2019 and 2021, she had a recurring role as The Guide on FX's "What We Do in the Shadows," which was created by her "Flight of the Conchords" co-star Jemaine Clement, and in 2021, she began playing Number Two on the Disney+ series "The Mysterious Benedict Society."

Kristen married comedy writer Rich Blomquist on September 14, 2012. Blomquist was a writer for "The Daily Show" from 2002 to 2012 (which earned him seven Primetime Emmys), and he wrote three episodes of "The Last Man on Earth." Kristen and Rich co-wrote the 2010 book "The Sexy Book of Sexy Sex," and they welcomed daughter Ruby in February 2018. During a 2017 charity stream, Schaal revealed that she underwent emergency surgery after suffering a ruptured fallopian tube and ectopic pregnancy. This happened during a "Gravity Falls" recording session and resulted in Kristen losing two liters of blood.

In 2017, Schaal earned a Primetime Emmy nomination for Outstanding Character Voice-Over Performance for "BoJack Horseman." She received the Andy Kaufman Award at the 2005 New York Comedy Festival, and in 2014, she earned an American Comedy Award nomination for Comedy Special of the Year for "Kristen Schaal: Live at the Fillmore." Kristen has won two Annie Awards: Voice Acting in an Animated Television or Other Broadcast Venue Production for "Gravity Falls" in 2013 and Outstanding Achievement in Voice Acting in an Animated TV/Broadcast Production for "Bob's Burgers" in 2016. She received a Streamy Award nomination for Best Female Actor in a Comedy Web Series for "Horrible People" in 2009, and she shared Best Ensemble Cast nominations with her "Horrible People" and "The Hotwives of Orlando" co-stars.