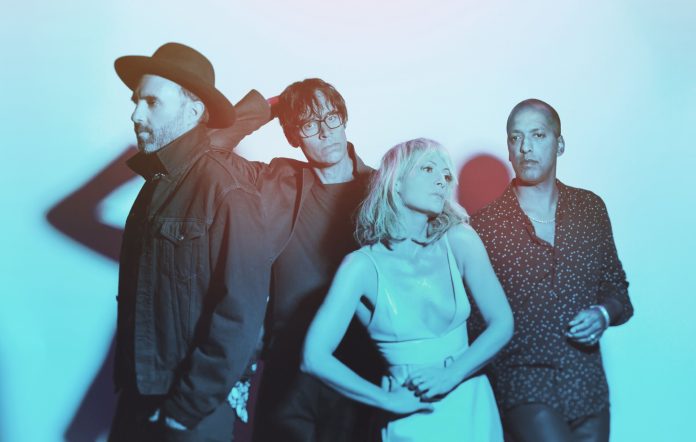 Metric have announced details of their eighth studio album ‘Formentera’ and shared lead single ‘All Comes Crashing’ as well as announcing a massive North American tour – get tickets here.

The announcement comes alongside the release of fiery new single ‘All Comes Crashing’. Check it out here:

Speaking about the “end of days banger” track, vocalist Emily Haines said: “Not everyone has a conventional life with conventional relationships. ‘All Comes Crashing’” is a love song that goes beyond romantic love, it’s an expression of solidarity with whoever it is you would want to have beside you in the event of catastrophe. It might be your best friend, it might be your blood brother or your dog.

“The song is dedicated to those you consider your family, whatever that looks like for you,” she added.

It’s more an expression of solidarity with whoever it is you would want to have beside you in the event of catastrophe. It’s dedicated to those you consider your family, whatever that looks like for you. xo

In a four-star review of 2018’s ‘Art Of Doubt’, NME wrote: “Rather than chasing a demographic, Metric have spent their careers driven by impulse. “To be good, get better / I change by staying the same,” spits frontwoman Emily Haines on the fiery rock opener ‘Dark Saturday’, cutting to the chase of what seventh album ‘Art Of Doubt’ is all about. Here, Metric are picking up that impulsive thread that’s run through their best work, thereby capturing the essence of what makes their fans love them so dearly.”

Metric have also confirmed details of a 39-date “Doomscroller Tour” set to take place in North America this summer. Dear Rouge(*) and Bartees Strange(†) will support the band across Canada with Interpol(‡) also playing a handful of shows with the rock band.

Further dates in Europe and the UK are still being “finalised”. Get tickets here and check out the dates below.