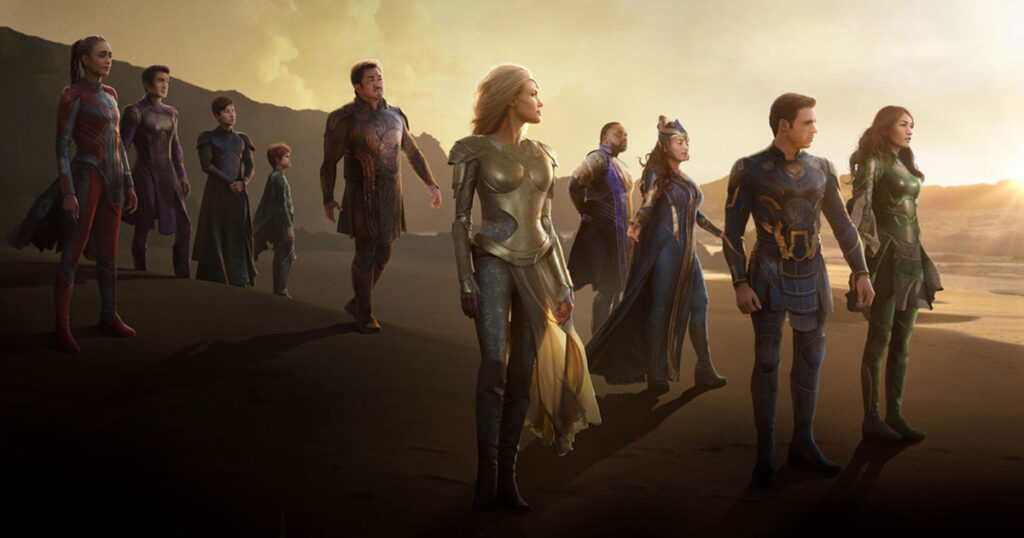 Marvel Studios has unleashed a brand-new Eternals TV spot that introduces the MCU’s newest superheroes. If you thought the Avengers were a bunch of badasses, wait until you see how the Eternals take care of business.

In the new promo, Kumail Nanjiani’s Kingo describes the Eternals as the “greatest warriors the world has ever known.” That’s a bold statement for a group of heroes that remained on the sidelines during Thanos’ attack on Earth, but I’m to understand that their absence will be explained in the movie. As the Eternals TV spot continues, we’re given a great look at the new characters, their powers, and the film’s exquisite set design. Then again, the beauty of this movie should surprise no one, seeing as it hails from Oscar-winning director Chloe Zhao.

Per the official synopsis from Marvel Studios: Eternals welcomes an exciting new team of superheroes to the Marvel Cinematic Universe. The epic story, spanning thousands of years, features a group of immortal heroes forced out of the shadows to reunite against mankind’s oldest enemy, The Deviants. The outstanding ensemble cast includes Richard Madden as the all-powerful Ikaris, Gemma Chan as humankind-loving Sersi, Kumail Nanjiani as cosmic-powered Kingo, Lauren Ridloff as the super-fast Makkari, Brian Tyree Henry as the intelligent inventor Phastos, Salma Hayek as the wise and spiritual leader Ajak, Lia McHugh as the eternally young, old-soul Sprite, Don Lee as the powerful Gilgamesh, Barry Keoghan as aloof loner Druig, and Angelina Jolie as the fierce warrior Thena. Kit Harington plays Dane Whitman.

Based on the 1976 comic book series created by Jack Kirby, Marvel’s Eternals are often described as an offshoot of the transformative process that created sentient life on Earth. According to Marvel lore, the Eternals were intended to be defenders of Earth by their creators, The Celestials. In time, an opposing force known as the Deviants were introduced as a way to secure the destruction of the goodly-natured beings. Now, the Deviants are invading the MCU, and it’s up to the Eternals to prevent the world from falling into chaos and ruin.

Did Marvel’s new Eternals TV spot get you hyped for the upcoming film? Do you think the new team can hold a candle to the Avengers or is it too soon to tell? I’m genuinely excited to meet an entire team of new heroes and hope that MCU fans don’t judge them too harshly on their way toward the spotlight. Perhaps that’s asking too much, but I want Phase 4 of the MCU to be just as successful as the ones that came before it. Here’s hoping for great things!

Eternals will hit theaters on November 5, 2021.