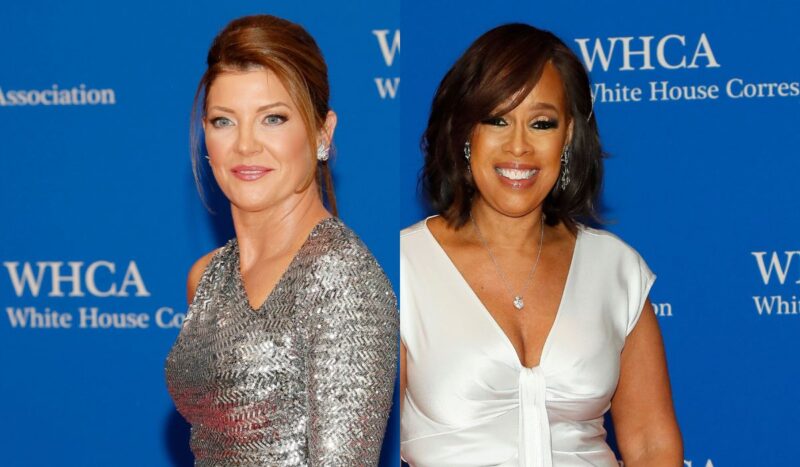 A source says Norah O’Donnell is on CBS’ chopping block.

Did Gayle King stick her neck out for Norah O’Donnell? One tabloid claims that King saved her CBS rival—but not because she’s fond of her. Let’s check in on the anchors’ alleged feud.

The latest edition of the National Enquirer reports Norah O’Donnell was on the chopping block, and she only managed to stick around because of her alleged rival, Gayle King. According to the outlet’s inside source, “unpopular diva” O’Donnell was on the verge of being fired and replaced by King’s CBS Mornings co-host Tony Dokoupil. “Gayle is no fan of Norah’s, but she hand-picked Tony and likes the chemistry on her set,” the tipster dishes. “It’s crazy, but Gayle saved Norah’s job!”

The outlet notes that O’Donnell’s position became increasingly precarious after she lagged behind her colleagues to report on the Russia-Ukraine crisis from Poland. “They’re far from friends, but Gayle’s smart,” the snitch adds. “She put together her show and she wants to see it succeed with the pieces she put in place. Having Tony taken away could derail all that!” But just because the source claims King saved O’Donnell, that doesn’t mean they’re besties now. “[O’Donnell] knows how close she came to being fired and she’s grateful Gayle saved her… Even if she can’t stand her!” the source concludes.

Was Norah O’Donnell On The Chopping Block?

This report is a complete work of fiction. First of all, we should clear up the fact that Norah O’Donnell was most likely never in danger of being fired. Since she became the face of the CBS Evening News, network executives have consistently defended her and pushed back at rumors that her job was insecure. So, there likely wasn’t anything to “save” O’Donnell from. Furthermore, Gayle King may have some leveraging power, but she doesn’t have final say in who stays and who goes.

If the CBS top brass really wanted O’Donnell gone, then she would be. But, instead, the network extended her contract, and we’re sure King didn’t have her hands in that decision. But what this story really comes down to is the outdated and completely disproven notion that King and O’Donnell don’t like each other. As we’ve explained time and time again, King and O’Donnell are professionals that have always gotten along just fine, and reports like these would be far rarer if we were talking about two male anchors.

The Tabloid On Gayle King And Norah O’Donnell

This report seems extra sketchy when you realize that back in November, the National Enquirer reported King was actually pushing O’Donnell out with the intention of replacing her with Tony Dokoupil. And then the tabloid claimed CBS was firing O’Donnell to cut costs. And just a couple of weeks ago, the publication alleged King wanted O’Donnell fired. Clearly, the Enquirer can’t keep its stories straight when it comes to Gayle King and Norah O’Donnell.