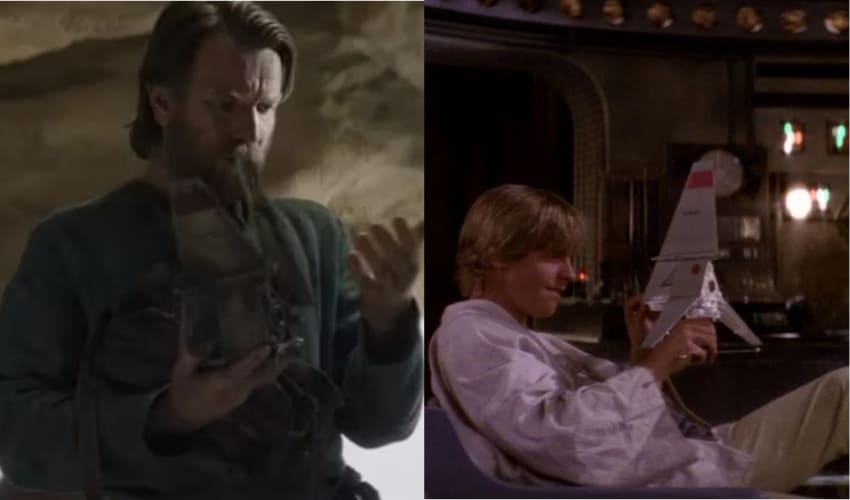 Fans were excited when Disney announced that the galaxy-famous Star Wars character, Obi-Wan Kenobi, was getting a solo series on Disney+. It has been 17 years since they battled on the planet of Mustafar, but now they are back to bolster Obi-Wan and Darth Vader’s history with a new adventure. With the Obi-Wan Kenobi series ending (here’s hoping for a season 2), let’s look back at the exciting references and Obi-Wan Kenobi easter eggs we found along the way.

Even though he has sworn to Owen to leave young Luke Skywalker alone, he still keeps an eye on the child now and again. After one of his spying sessions, he notices that Luke takes after his father in wanting to be a pilot. Later he is in town and sees a toy spaceship. He buys it and leaves it anonymously at the door of the Lars farm. Owen finds it and confronts Obi-Wan about leaving such gifts. It looks like the matter is solved, but eagle-eyed viewers will note that it’s the same toy we see Luke holding in Episode IV: A New Hope. Later in the final episode, we see Owen relenting and letting Obi-Wan meet the young Luke with the toy in hand.

In the first episode of Obi-Wan Kenobi, we see that Jedis are leaving their old identities behind to escape the Empire. They are hunting down Jedis to purge them from the galaxy. A Jedi named Nari has a showdown with some inquisitors but can escape. Later, he returns and confronts Kenobi, saying he knows who he is and that they should help each other.

Kenobi advises that he should walk out into the desert on Tatooine, bury his lightsaber in the sand, and forget about his life as a Jedi. We later see that he doesn’t take Obi-Wan’s advice and pays dearly for it. Obi-Wan himself later makes his way out into the desert to retrieve his own buried lightsaber (along with Anakin’s) when he decides to go search for Leia. This instance reflects what Rey would do at the end of Episode IX: The Rise Of Skywalker when she buries Luke and Leia’s lightsabers outside of the old Lars homestead. 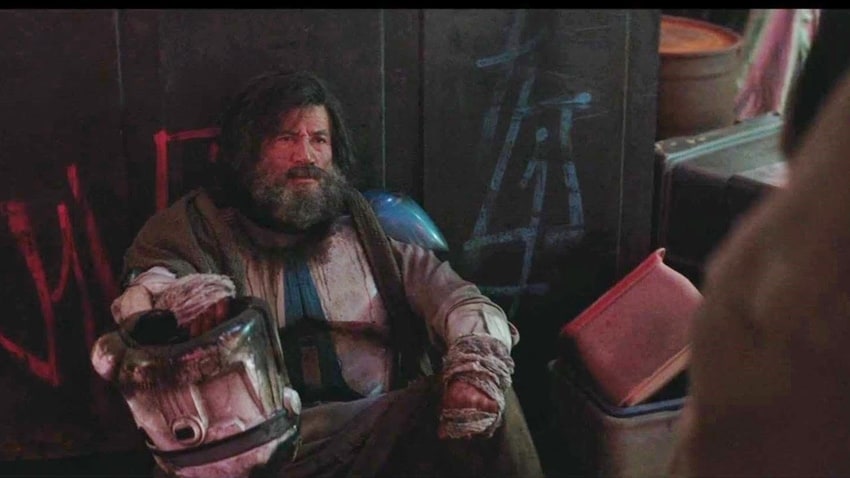 Fans of the prequels and the Clone War era series were excited to see Boba Fett actor Temuera Morrison make a cameo appearance in the series as a homeless Clone Trooper. Temuera Morrison played all the cloned stormtroopers in the franchise before this series. Here we see that after the Empire moved away from using clones, they enlisted those who believed in their cause. This detail left the clones without a purpose, and it looks like this one has fallen on hard times. Throughout the Clone Wars animated series, Obi-Wan worked closely with the clone troopers before Order 66 caused them to turn on the Jedi. For more info on the Empire moving away from clones, I’d recommend watching The Bad Batch on Disney+. It’s a great show and a fantastic Obi-Wan Kenobi Easter Egg. 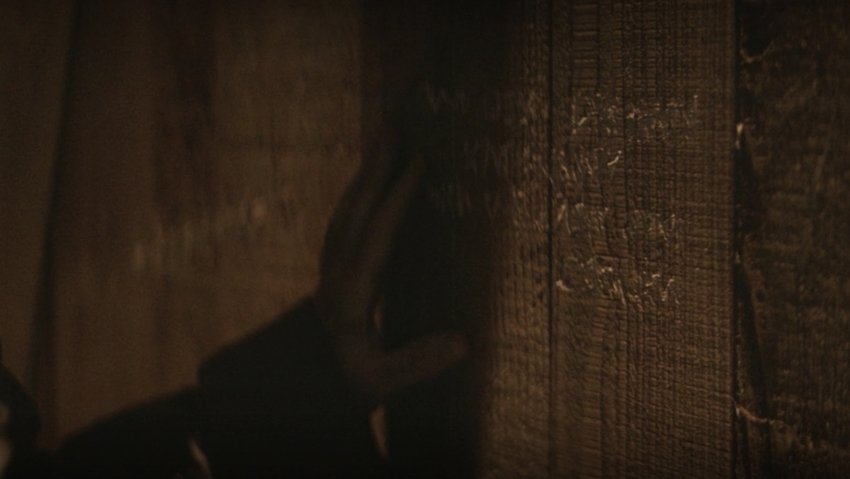 Jedis Along The Path

When Obi-Wan and Leia are taken to the resistance’s hideout, we find out that they have hidden tunnels to help smuggle Jedis to the ship hanger and off the planet to Jabiim. They call this system The Path. When Jedis move through, they carve their names on the wall to identify that they went through the tunnels. It’s a way of saying goodbye to their old identities before heading off to a new life elsewhere in the galaxy.

Obi-Wan reads through some of the names, and other web sleuths have decoded the language to find familiar names like Quinlan Vos, Valin Halcyon, Roganda Ismaren, and Djinn Altis pop up. Some of these are being officially added to Star Wars Canon for the first time. They had appeared in games or books that are no longer considered part of the official continuity. 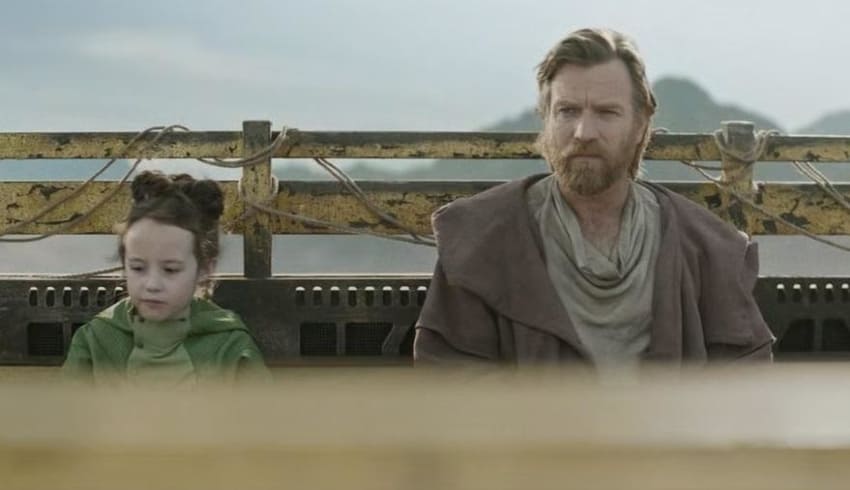 While talking to Leia, Obi-Wan mentions that he used to have a brother. He had left his family as a youngling to go and train with the Jedi Order. Obi-Wan says he has glimpses of his life from before but was so young that he doesn’t recall much. He mentions that he remembers a baby and thinks he had a brother.

An interesting fact is that his home planet is called Stewjon. This detail was revealed as a joke at Star Wars Celebration V. Jon Stewart was interviewing George Lucas, and a fan asked what Obi-Wan’s home planet was called. He laughed and said Stewjon giving his interviewer a good chuckle. But since then, the statement has been made a fact and printed on official Star Wars info about Obi-Wan. 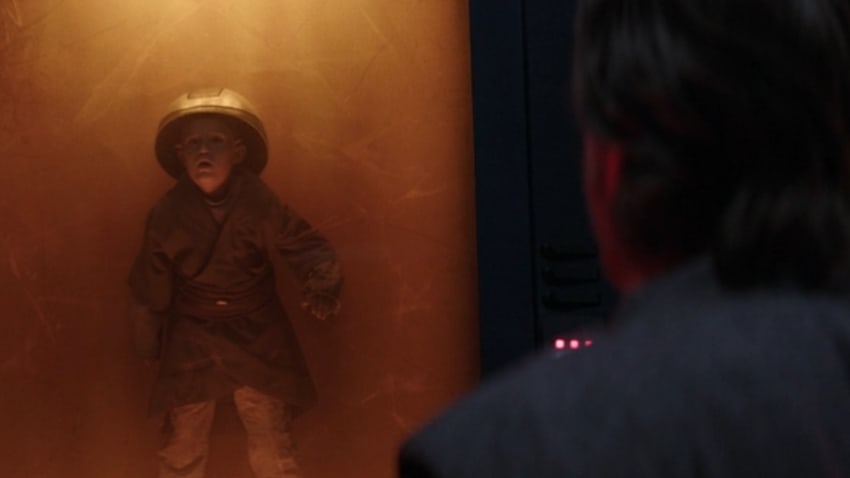 Obi-Wan sneaks into Fortress Inquisitorius to rescue Leia. While trying to find what floor she is on, he stumbles upon a horrible sight. Within the Fortress, there is a floor that is dedicated to the preserved bodies of fallen Jedi. They all appear in an amber type of material so that they may be displayed. Obi-Wan is mortified, and sadly there are some familiar faces. One looks to be Coleman Kcaj, who appeared in Episode III: Revenge Of The Sith and the Clone Wars series. Another seems to be Tera Sinube, who appeared throughout the Clone Wars series. Perhaps the saddest is the unidentified Youngling, who appears to be caught in a moment of terror.

Episode 5 would show a flashback sequence of Obi-Wan and a young Anakin sparring. It’s a lot of fun to see Ewan McGregor back on-screen together. They have some fun moments together as the flashbacks continue throughout the episode. Before Obi-Wan enters the sparring room, we see Anakin looking out the window at the city skyline. What may not be obvious at first is that he is looking at Padame’s apartment building. Even when he should be training, his mind still wanders to his love for Padmé. It’s a small reference but still an interesting Obi-Wan Kenobi Easter Egg.

At the end of the episode, while the citizens board the ship, they try to escape when Darth Vader comes in and shows why he’s a Sith Lord. He grabs the ship using the Force and prevents it from taking off. He then rips the ship’s side open, discovering that the vessel is empty, and another vehicle takes off. We have seen an impressive use of the Force in the video game Star Wars: The Force Unleashed. In it, Darth Vader’s secret apprentice Starkiller does a similar feat when he pulls down a Star Destroyer into the ground. Rey would later use the Force to pull a ship similarly later in one of the sequels.

During their big confrontation in the last episode, we see Obi-Wan get the better of Darth Vader. For a second, we think it might go the other way. Not that we felt either was in danger as they lived past this encounter, but at first, Vader collapsed the ground under Kenobi’s feet. The camera now shows that Vader has the advantage over Obi-Wan. A lesson he learned in Episode III: Revenge Of The Sith. He buries Kenobi under a layer of boulders.

He walks away, but Obi-Wan can free himself, and the duel continues. When Obi-Wan nearly defeats Vader, his helmet splits open, and we glimpse Anakin underneath. With tears in his eyes, Kenobi tells him he is sorry. At this point, Vader says that Anakin is dead and that Vader is what remains. He tells Obi-Wan that Darth Vader killed Anakin Skywalker. Metaphorically, this leads into a plot hole that fans have complained about since the prequels came out. Kenobi told Luke that Vader had killed his father. It was later revealed that Vader was his father. This reveal seems to put a knowing twist on that line of dialogue that makes it no longer a problem but more an instance of Kenobi not telling him specific details. This detail is an interesting Obi-Wan Kenobi Easter Egg that they created to fix that plot hole. 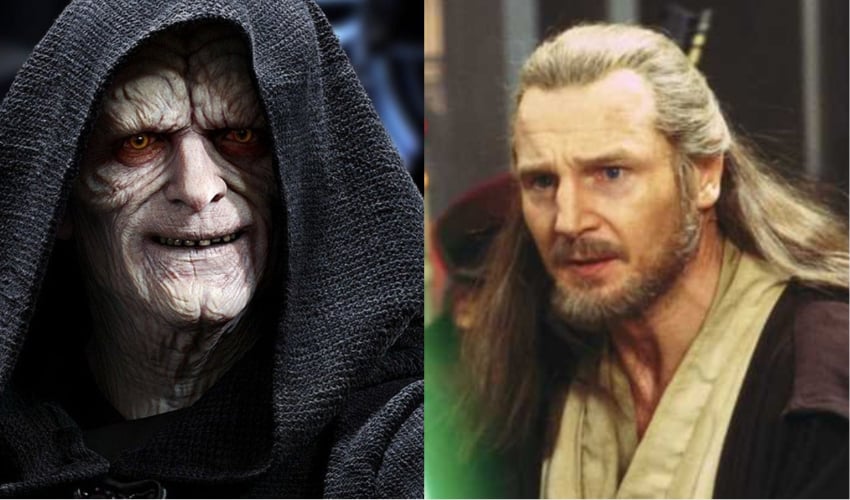 After Kenobi and Vader go their separate ways, we get two big-time cameos from their masters. First up, a recouped Vader is seen talking to Emperor Palpatine, again played by Ian McDiarmid, via holographic communication. Vader says that he plans on using the full force of the Empire to search everywhere in the galaxy for Kenobi. Palpatine replies and tells him not to worry about Kenobi. Vader then reassures him that he is the only master that he serves. We’ll see if that was enough to stop him from looking for Kenobi until they meet again in Episode IV: A New Hope.

Obi-Wan returns home but decides he doesn’t need to linger and watch over Luke anymore. Owen and Beru seem to have that covered, and he decides to leave. He stops by for a quick visit but is then on his way. All season he has been trying to convene with his old master Qui-Gon Jinn but doesn’t seem to be able to connect with him. We’re used to seeing force ghosts of deceased Jedi, but for Obi-Wan, this is a new concept. When he finally seems at peace with his old life, Qui-Gon finally appears to him. Once again played by Liam Neeson, it’s nice to see the old Jedi. It seems he and Obi-Wan will have a long time to catch up.

What are some other Obi-Wan Kenobi Easter Eggs in the series? Let us know in the comments.