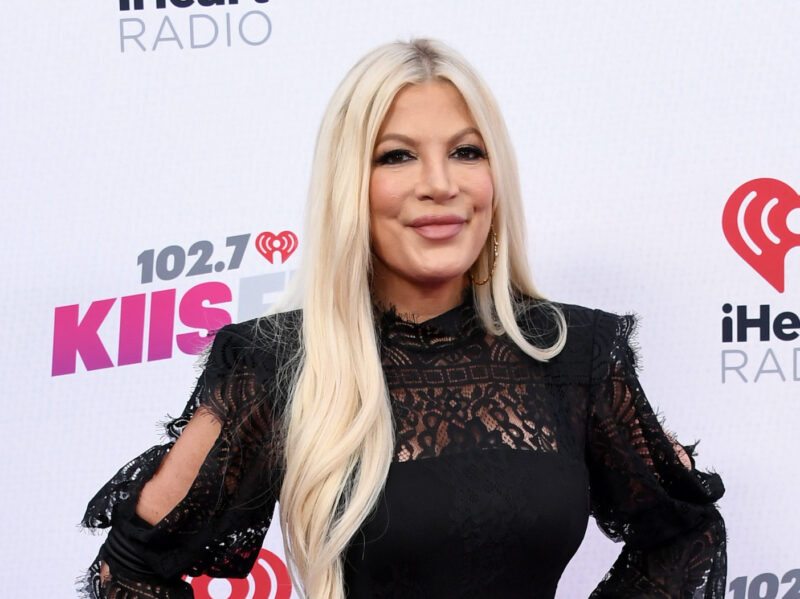 A source claims that Spelling is stressed over her finances.

Are Tori Spelling‘s friends and family worried about her health? One tabloid claims the stress of her rumored separation is getting to the 90210 star. Here’s the latest gossip about Spelling.

Tori Spelling ‘At Her Breaking Point’?

This week, Us Weekly reports Tori Spelling and Dean McDermott’s marriage is “hanging by a thread,” and sources say the actress isn’t faring well. According to the outlet’s insider, Spelling and McDermott have been “going through a trial separation,” and now Spelling’s friends are worried she can’t handle the stress. “Tori’s friends are worried because they never hear from her anymore,” an insider reveals. “They try to reach out and hear no word back. She hasn’t been doing social things anymore either.”

Apparently, the only thing keeping Spelling from filing for divorce is the financial toll it would take on her. “Tori’s been so MIA that everyone wonders if something’s going on, like she’s having money troubles again or is depressed,” the tipster spills. “She seems to be isolating herself.”

Is Tori Spelling In Hiding?

We can definitely say that whoever wrote this story certainly isn’t close to Tori Spelling. Firstly, we have no authority to respond to her rumored separation from Dean McDermott. Rumors of strife have plagued the couple for well over a year, and they’ve done little to fend off the gossip. So, the best we can say about this bit is that it isn’t far-fetched, but it certainly hasn’t been confirmed.

But as for Spelling’s personal life, it doesn’t seem like she’s anywhere near a “breaking point,” and she certainly isn’t in hiding. The actress still constantly posts to social media, and she even has her own lifestyle show on Vizio WatchFree+.

And Spelling certainly keeps in touch with her friend and former 90210 co-star Jennie Garth. The pair still works together on their 9021OMG podcast, so the outlet’s story about no one being able to get in touch with Spelling was an outright lie. It just goes to show that whoever the rag was speaking to simply isn’t in Spelling’s inner circle.

More Mistakes From The Magazine

Not to mention, Us Weekly‘s record certainly isn’t helping here. Late last year, the outlet reported Dean McDermott went missing after a fight with Spelling. And the outlet has certainly run this schtick about celebrities in crisis before. Not long ago, the tabloid claimed Kelly Clarkson was overwhelmed by stress and was worrying her friends. And more recently, the publication alleged Clarkson was mortified by recent developments in her divorce battle. So, we’d advise readers to always take Us Weekly‘s reporting with a grain of salt.