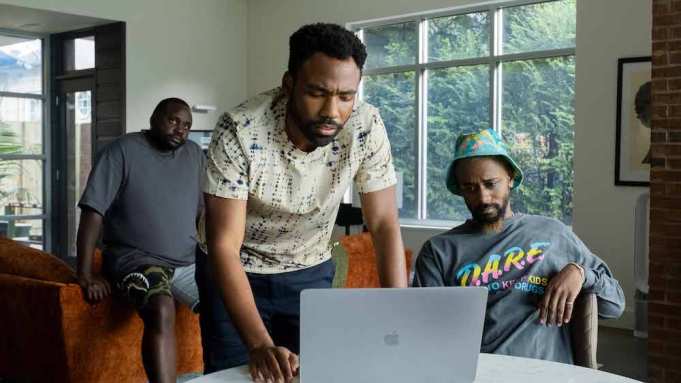 FX’s Atlanta came to a close Thursday night and, forgoing typical fanfare of a series finale, the episode once again does what Atlanta does best by subverting the idea of what, exactly, a series finale should even be.

Aptly titled “It Was All A Dream,” the episode sees Darius (Lakeith Stanfield) grapple with reality while in a sensory deprivation tank, which eventually calls into question the events of the entire episode. After several outlandish encounters that turn out to be dreams, Darius manages to help Earn (Donald Glover), Al (Brian Tyree Henry), and Van (Zazie Beetz) escape a Black-owned sushi restaurant after the owner tries to hold them hostage.

As the episode wraps, the core characters all share the screen together for the last time, discussing their days — but viewers are left to wonder whether or not any of it actually happened. With another show, the answer might be clear, but as executive producer and writer Stephen Glover told Deadline, “everything has felt so dream-like in Atlanta anyway.”

Glover spoke with Deadline about the legacy of Atlanta, finding the right way to end the series, and why we’ll never know if Darius really was still in that sensory deprivation tank.

DEADLINE: As you approached the finale, how did you determine what would be the right send off for Atlanta?

STEPHEN GLOVER: The idea was like, ‘Let’s just make a fun episode.’ So this came from just a fun idea that we built off of, not trying to bear the weight of like ‘Oh, it’s the last episode. You gotta do something crazy or weird.’ I think we talked about the last episode being like King of the Hill. It’s just a regular episode.

DEADLINE: The series has taken some big swings in terms of shifting genres throughout all four seasons. The finale feels much more like Atlanta returning to its roots. Was that a conscious discussion about how the final episode should feel?

GLOVER: I think it was really just this idea that Season 3 was this mind expanding [season]. It’s outside of Atlanta, and there’s all these maximalist things happening. Then it’s like, we come back to Atlanta, and it does remind you of how familiar it is. Seasons 1 and 4 feel a lot alike, but there are differences. People are rich now. People are thinking about their longevity in a different way. I think that just happened kind of naturally from just wanting to look at that idea of stepping out into the world and seeing all these things and then coming back home.

DEADLINE: So, let’s talk about Darius and the sensory deprivation tank. How did you decide that thick Judge Judy would be his indicator that he was still in the tank?

GLOVER: I think we had just seen a meme of thick Judge Judy. We were like, ‘This would be funny if this was your tell in a dream world.’ We just crafted it to be kind of this funny meme. I think it’s hilarious.

DEADLINE: There are several times that he thinks he’s awake, and he isn’t. It’s hard to tell because Darius of all people would be caught in these situations. Another one of those is the scene where he and London are pulled over.

GLOVER: We talked about the just the idea of somebody drinking an entire water bottle of vodka and pretending it’s not vodka, and it’s just funny. We thought about what was going give us a big laugh or make this bit really enjoyable for us. We always like the idea of subverting expectation. Even with the “Crank That Killer” episode, with Roberto, there was like a whole thing we ended up cutting where you saw Roberto’s home life, and then he ends up getting pushed through the window. TV can be so formulaic sometimes, and people realize they’ve seen things so many times. It’s kind of easy to get people to really believe you’re gonna do one thing if you just play it straight, but that’s kind of one of the fun things we’ve liked to do since the inception of the show.

DEADLINE: We’re left wondering if Darius is still in the deprivation tank at the end of the episode. It’s almost like an Inception moment. Why leave the audience without that closure?

GLOVER: I don’t think it’s that deep, but I do think there’s this idea that everything has felt so dream-like in Atlanta anyway. [Whether it’s] real or fake, it all feels real to you anyway. I think that’s just the idea that we walked away with — this idea of having your friends together and having a good time and eating Popeye’s and laughing. It’s kind of like, is that a dream or are you manifesting these things that you wanted anyway? It can feel like a dream.

DEADLINE: You said it wasn’t deep, but I’d beg to differ based on that answer.

GLOVER: Yeah, I did get kind of deep there. [That ending] just feels fun. That was a big part of Season 4, was having that fun feeling.

DEADLINE: We saw Van and Earn have a pretty deep conversation about moving to L.A., but we didn’t get the same sort of conversation between Earn, Darius, and Al. Are we meant to assume that happened off camera?

GLOVER: He talked about it a little bit with Alfred in the farm episode, but I think it’s one of those things where it’s like, we know how that’s gonna go. It’s not like they’re gonna stop him. His mind is made up. I think there’s that feeling of growth and being okay and even though things are different, you can still enjoy the moments you are together. Like the nostalgia of when you get together for Thanksgiving, and like all your family is there. It reminds you all the other things don’t matter, how long it’s been or whatever.

DEADLINE: This season has grappled a lot with legacy, and what to do with your success once you’ve found it. I wonder how you feel about the legacy of Atlanta and where you’re leaving it behind?

GLOVER: I think we definitely put something out there that people will talk about and hopefully it will influence the next generation. I’m proud of a lot of the stuff we did. It was my first time writing on TV. There’s a lot of things that I feel we did really well. I want to take the spirit of the show and put that forth into all the things that I do. I think the legacy is also the same for other people. You can make non-mainstream things. You’d be surprised how many people are looking for something different, something new. Be willing to take those swings.