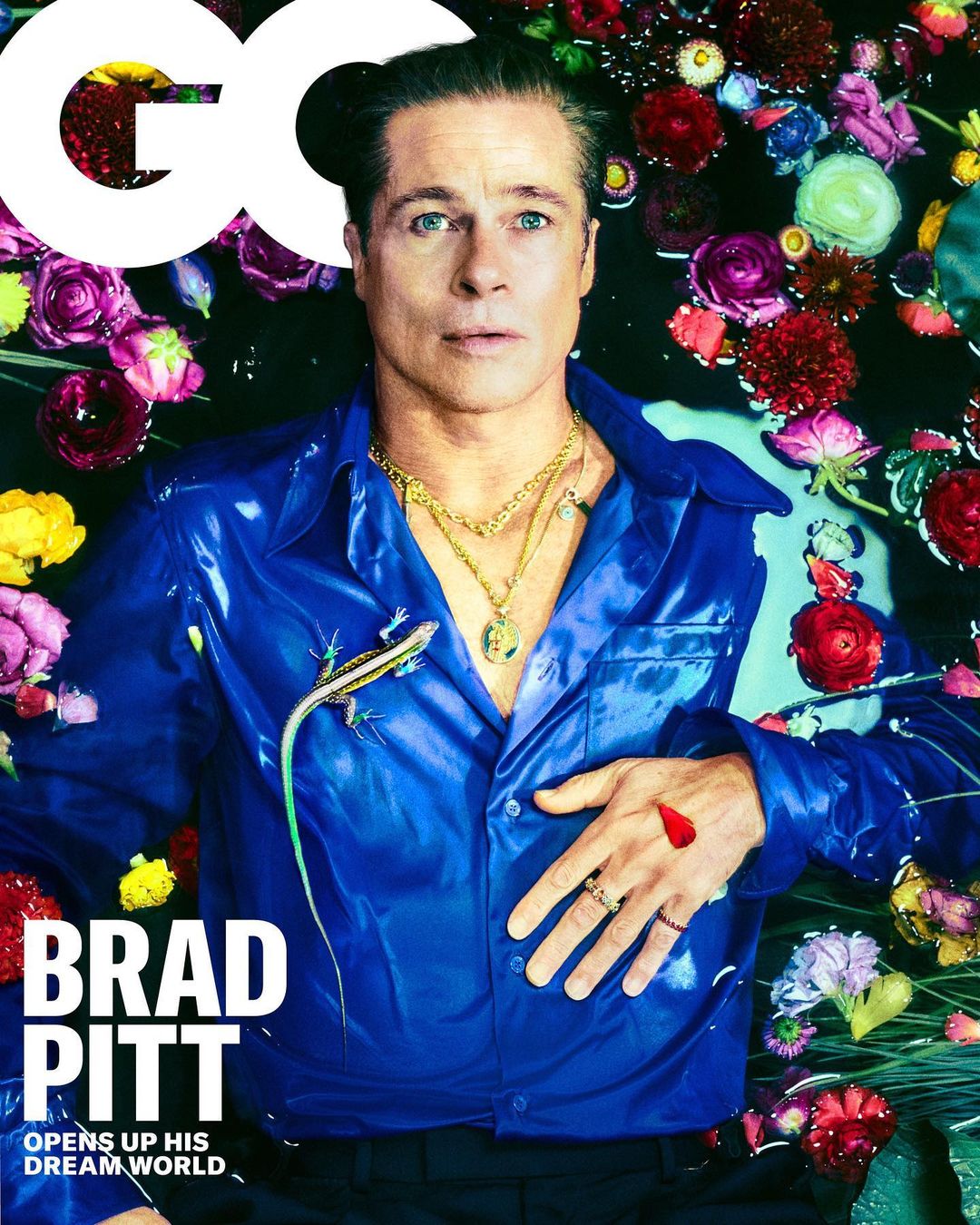 Brad Pitt speaks through his art: ‘If I’m not making, I’m dying in some way’

It’s consistently shocking to realize that even in the year of our lord Beyonce 2022, conventionally attractive white men are exhaustively praised for doing the bare minimum. That’s what I thought about as I read Brad Pitt’s August GQ cover profile. How easy it is for him to sit there and act like he’s some cool-guy lonely-wanderer bohemian artist. He just sits and talks about art and deflects questions and poses. Shallow and navel-gazing doesn’t even cover it. And GQ doesn’t call him out or say sh-t about how bizarre it all is. There are no family photos in his home, the divorce from Angelina is mentioned, and… nothing. No questions of “so do your children hate your guts” or “why do you continue to drag Angelina.” You can read the full GQ piece here. He’s promoting Bullet Train, where he plays some kind of assassin. Some highlights:

The final stages of his career: “I consider myself on my last leg, this last semester or trimester. What is this section gonna be? And how do I wanna design that?”

His Craftsman home in LA: “This was the first place I bought when I made some money in ’94… It was really run-down and dilapidated. I lived here for a few years, then I bounced around everywhere, just let friends crash here, and then somewhere in the aughts I fixed it up. Been pretty much hiding out here.”

He plays the guitar drives to his beach house: “I drive out and I just feel like I’m taking off a cloak or something,” he says. When he’s heading back into town, he says he can feel the weight of the place. “As soon as you turn in past Santa Barbara, I feel it coming. The shoulders start getting a little higher, and I feel it. I’m not quite sure what that is and how to contend with it just yet. Other than getting out and traveling a lot.”

The Artist: “I’m one of those creatures that speaks through art. I just want to always make. If I’m not making, I’m dying in some way.”

He quit smoking: Pitt offers me a nicotine mint. He chews them mindlessly. He explains that he quit smoking during the pandemic after realizing that simply cutting back on cigarettes wasn’t going to suffice—he had to cut them out. “I don’t have that ability to do just one or two a day. It’s not in my makeup. I’m all in. And I’m going to drive into the ground. I’ve lost my privileges.”

He’s been sober for six years: After Jolie filed for divorce, in 2016, he got sober and spent a year and a half attending Alcoholics Anonymous. “I had a really cool men’s group here that was really private and selective, so it was safe. Because I’d seen things of other people who had been recorded while they were spilling their guts, and that’s just atrocious to me.”

On David Hockney aging: “He’s still chaining, the hard-core English way. It looks great. I don’t think I have that. I’m just at that age when nothing good comes from it.”

Solitude: “I always felt very alone in my life, alone growing up as a kid, alone even out here, and it’s really not till recently that I have had a greater embrace of my friends and family. What’s that line, it was either Rilke or Einstein, believe it or not, but it was something about when you can walk with the paradox, when you carry real pain and real joy simultaneously, this is maturity, this is growth.”

Profound Pitt: “I am a murderer. I’m a lover. I have the capacity for great empathy and I can devolve into pettiness.”

It’s possible Pitt was asked specific questions about his various tabloid dramas and he simply declined to answer and nothing was included in the GQ piece. But I find that bizarre – he’s been using the legal system to extend his abuse of his ex-wife and it’s an on-going issue. A judge was thrown off their divorce case, and he just sued Angelina over Miraval. And still no questions. Just hipster vibes and play-acting the sad, lonely, sober man. This is his brand now: Bohemian Brad, the sculptor and sad artist. Ugh.