Vivienne Westwood — the fashion designer known as the “high priestess of punk” — has passed away at the age of 81.

Her eponymous fashion house revealed the heartbreaking news on social media, writing she passed away on Thursday “peacefully and surrounded by her family, in Clapham, South London.”

“Vivienne continued to do the things she loved, up until the last moment, designing, working on her art, writing her book, and changing the world for the better. She led an amazing life. Her innovation and impact over the last 60 years has been immense and will continue into the future.”

The message then included some words directly from Vivienne, saying:

“Vivienne considered herself a Taoist. She wrote, ‘Tao spiritual system. There was never more need for the Tao today. Tao gives you a feeling that you belong to the cosmos and gives purpose to your life; it gives you such a sense of identity and strength to know you’re living the life you can live and therefore ought to be living: make full use of your character and full use of your life on earth.’ The world needs people like Vivienne to make a change for the better.”

Her husband and creative partner, Andreas Kronthaler, also said in a statement to The Guardian:

“I will continue with Vivienne in my heart. We have been working until the end and she has given me plenty of things to get on with. Thank you darling.”

As you may know, Vivienne began her career in fashion back in the 1970s shortly after she met Malcolm McLaren — manager of the punk rock band the Sex Pistols. The pair — who share son Joseph Corré — opened their famous Sex boutique in London, where they sold provocative outfits that challenged the era’s stuffy ideas of beauty. Her daring creations soon began to define the punk aesthetic at the time. And in the early 1980s, the creative partners began showing off their designs on the catwalk. She previously said of her work:

“It changed the way people looked. I was messianic about punk, seeing if one could put a spoke in the system in some way. I realized there was no subversion without ideas. It’s not enough to want to destroy everything.”

Over the years, many celebrities have rocked her designs, from Kim Kardashian to Princess Eugenie to Zendaya. She notably designed the wedding dress Sarah Jessica Parker wore in the 2008 Sex and the City movie. Beyond dressing high-profile figures, Vivienne also created pieces that brought awareness to a ton of important causes she cared most about — including climate change. She was even made a Dame in 2006 for her contributions to fashion.

Following the news of her death, tributes began to pour in from celebrities on social media, including model Bella Hadid, who expressed eloquently:

“Dearest Vivienne Queen of punk From the first day I met you to the last day I saw you, you made me smile , listen, learn and love more than the day before. I will forever be grateful to have been in your orbit , because to me and most , in fashion in humanity, you, Vivienne, were the sun.

To the coolest, most fun, incredible , humble, creative , badass, intelligent, f**king EPIC human being that has walked this earth… my inspiration and idol in all things … rest in love and Rest In Peace… I will miss you

“An icon in fashion who will be sorely missed.”

Kim Cattrall then said along with a snapshot of Vivienne:

“A true genius who never lost her northern grit. Short story – An LA stylist had sent me 3 dresses from various designers for the London/Berlin/NY premiers of a film. The clothes arrived at my London hotel unclean, were unflattering and in need of alteration. I was crest fallen until a mutual friend took me immediately to see @viviennewestwood atelier and Vivienne made me a new dress in 3 days and 2 others beside for each of the upcoming openings. I’ve never forgotten her generosity and kindness in making that happen and saving the day. RIP Vivienne. You are a legend. Kx”

The fashion world truly lost a legend. You can see more of the reactions from celebs (below):

https://t.co/pLAvvpyMWr #VivienneWestwood RIP it will take me a bit to take this in…

you gave me the courage to express myself. you were the reason i left the house with the confidence to look the way i did. heartbroken. thankyou for everythin, viv. RIP ???????? pic.twitter.com/xy1tU40Gp8

Rest in peace, Vivienne. What a woman – so young at heart, motivated, beautiful and elegant. Our love and deepest condolences go out to Andreas, Ben, Joseph and families. Love, yoko pic.twitter.com/HkDQhyoTrG

Deeply saddened by a true punk’s passing, Vivienne Westwood, what a hellraiser, what a talent. #VivienneWestwood #angelofdemocracy pic.twitter.com/MfFjwyApJO

R.I.P to the great and inspiring Vivienne Westwood who lead us through punk and beyond. Laughed at by the fashion industry but without question she is the undisputed Queen of British fashion. I love you! Oh bondage up yours! pic.twitter.com/O6RZqpEVLq

I love you Vivienne Westwood, you changed my life so many times. What you did for fashion + music will never be forgotten. Your efforts with activism to save this planet were so selfless + pure. We were so lucky to have you, long love the queen of punk. RIP ???? pic.twitter.com/OmRBxFNPnj 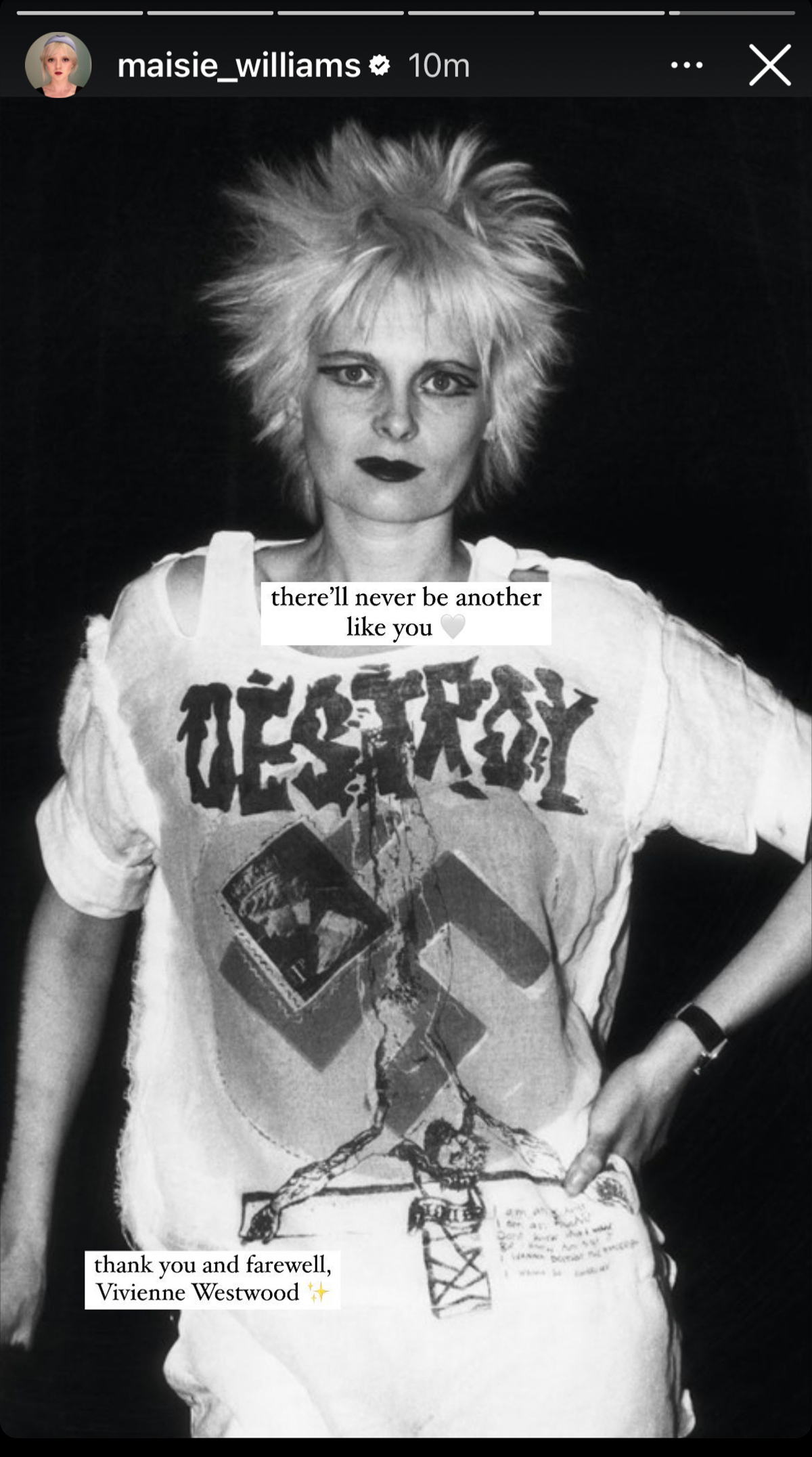 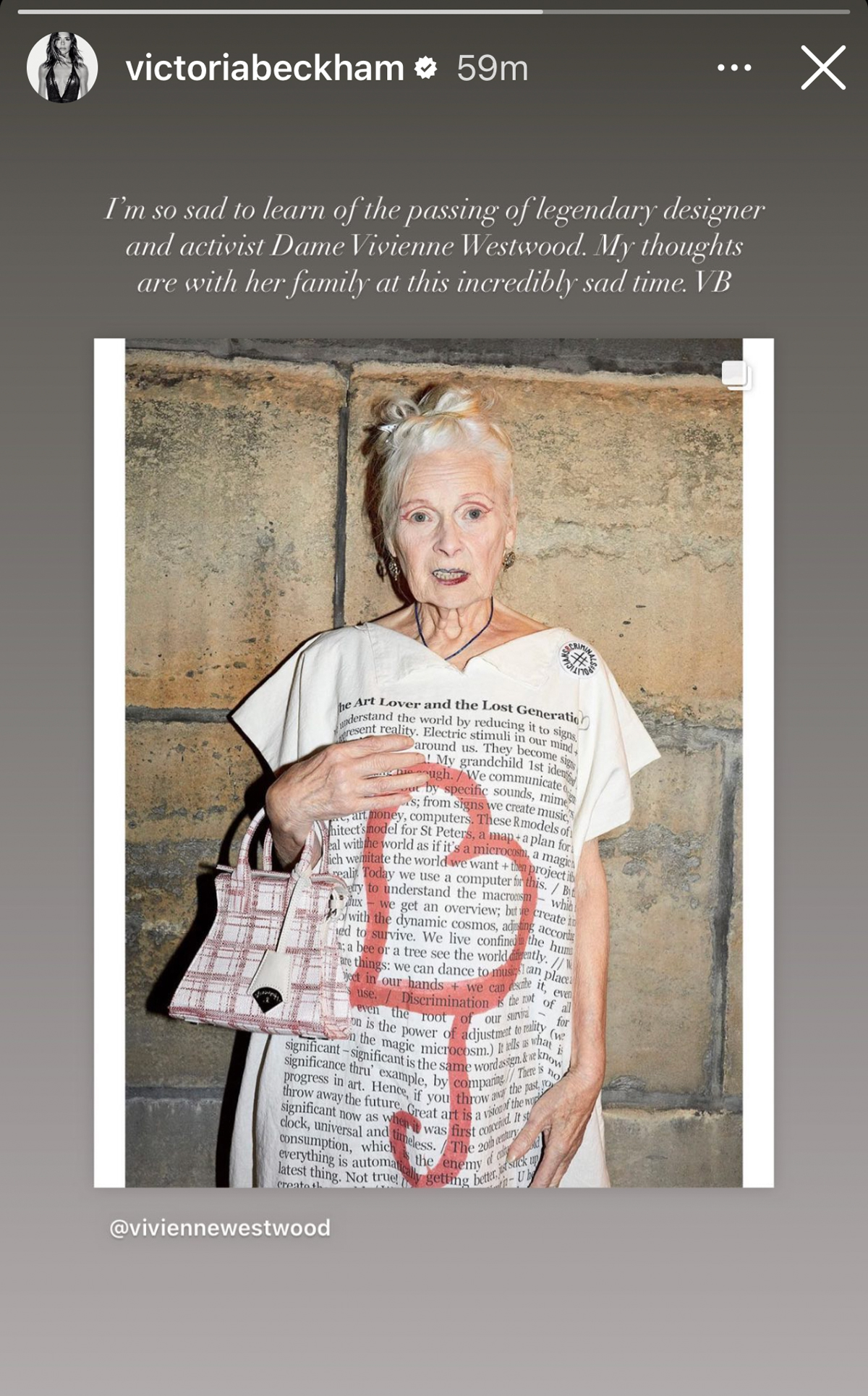