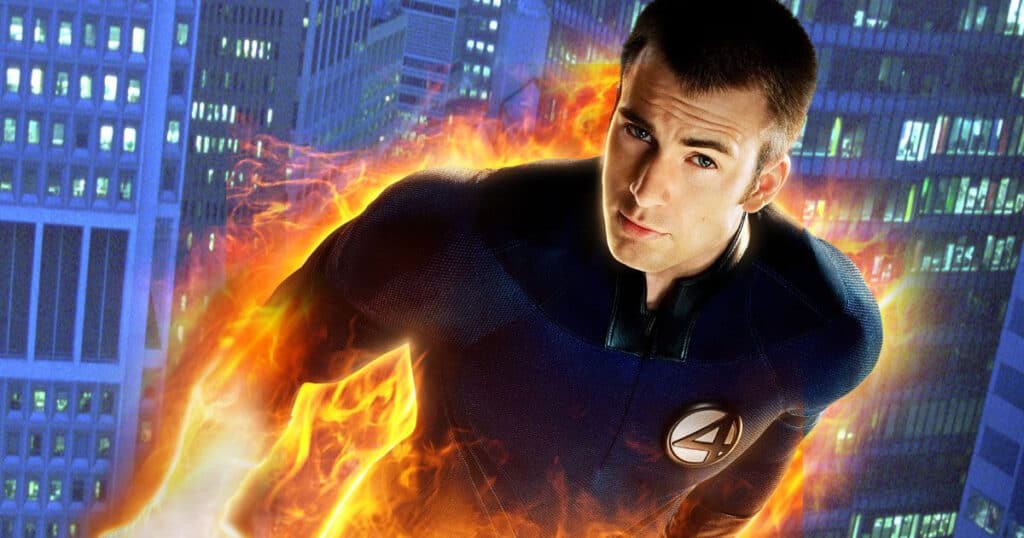 Before Chris Evans was Captain America, he was the Human Torch. The actor played Johnny Storm in the two Fantastic Four movies directed by Tim Story. It’s been fifteen years since Chris Evans last played the role, but some fans have been calling upon the actor to flame on once again, a feat that would be much easier now that the Marvel Multiverse is a thing.

While speaking with Josh Horowitz for MTV News, Chris Evans was asked about returning to the Marvel Cinematic Universe, not as Captain America, but as the Human Torch.

God, wouldn’t that be great? Wouldn’t that be great? No, no one’s ever come to me about that. I mean, I don’t exactly look the same anymore. That was 15, almost 20 years ago. Oh my God, I’m old. But I really love that character, but I think… aren’t they doing something now with Fantastic Four?

Marvel is working on a new Fantastic Four movie, but Horowitz mentioned that Chris Evans could easily play one of the many variants of the Human Torch that are out in the Multiverse. “Yeah, I guess that’s true,” Evans said. “I mean, I guess all bets are off. Yeah. Look, I would love it. I would love it. That would actually be an easier sell to me than coming back as Cap. You know what I mean? Cap is so precious to me. And you know, I almost don’t wanna disrupt what a beautiful experience that was. But Johnny Storm, I feel like he didn’t really get his day. That was before Marvel really found its footing. So, I loved that role and, you know, who knows.”

Chris Evans recently said that returning as Captain America would be a tall order. So perhaps fans should get behind the Human Torch campaign if they’d like to see the actor back in the MCU. As for the Fantastic Four movie, director Jon Watts stepped down earlier this year and Marvel is reportedly looking at some big names to replace him.

Would you like to see Chris Evans return to the MCU as the Human Torch?