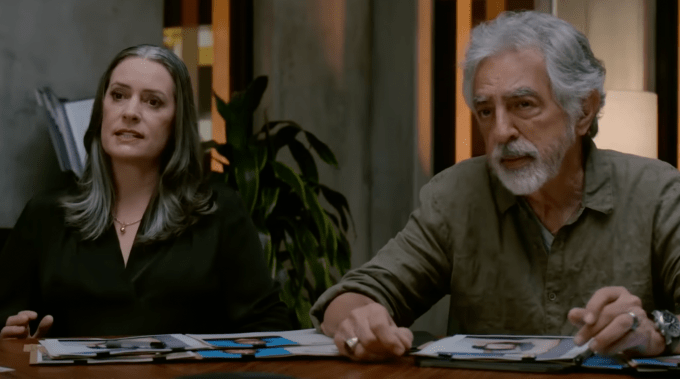 by Your Dark Fantasy

SPOILER ALERT: This story contains plot points from the premiere of Criminal Minds: Evolution on Paramount+.

Executive Producer Erica Messer never did get much of an explanation as to why CBS in 2019 canceled Criminal Minds, its long-running crime procedural that became appointment viewing for millions. “None of us wanted it to end creatively,” she tells Deadline. “We felt there were plenty more stories to tell. The cast was in such a groove and everybody loved being here.”

So when she was asked in the summer of 2020 to bring the show back, Messer wasn’t too worried about whether she could reassemble the BAU. “It all lined up and worked out,” she recalls. “We had four months to shoot 10 episodes and I felt pretty confident we could gather our troops for that.”

Here, Messer talks about the show’s premiere on Paramount+, why she cast Zach Gilford as this season’s villain, and whether we’ll ever learn the contents of Penelope’s pink note.

DEADLINE: When did talks begin to revive the show?

ERICA MESSER: We wrapped in May of 2019. In February of 2020, the last episode aired on CBS, and then a month later the world shut down. Late summer of 2020 is when I got the call asking if I’d want to do another version of Criminal Minds. I didn’t want to do another version, like a spinoff version, but I would do it if we could bring it back with our cast. Then about a year later they were able to get deals going and then I’d say by January of 2022 it felt like all the deals were going to happen.

DEADLINE: It took a long time. Why?

MESSER: It was a lot of things that I was never privy to, certainly above my pay grade. But on the creative side, we felt like this would be a fun opportunity to bring the show back, to bring it back at a premium streamer and to be able to lean into a 10-episode arc with a serial killer that’s beating our team, which we never really did.

DEADLINE: Why couldn’t Matthew Gray Gubler, who played Dr. Spencer Reid, join in on the fun?

MESSER: He’s been doing other projects and a lot of those were lining up during our window. Our window of shooting was just August to December 2. It was the same with Daniel Henney, who was working on The Wheel of Time. So I wasn’t able to get them, but I could get the six other cast members. They’ve never been better. They’re so happy. Their characters took the same time off that we had in real life, with the pandemic. The world has changed since we last saw the BAU. And because of that, the characters have changed. We needed to write to the reality of our everyone’s existence.

DEADLINE: How did you come up with the network of unsubs? Did you read that headline somewhere? Do these exist?

MESSER: I hope not. I have not read anything about that. That’s my paranoid brain in overdrive thinking, ‘what are serial killers doing during the pandemic?’ Why did I have that thought? I have no idea. But then I thought, ‘what if they’re talking to one another? What if they’re giving pointers?’ That’s what I pitched to Paramount and they said, ‘What’s wrong with you? And yes, please do that.’ I don’t know why that popped in my head. I think it came to me because, after the summer of 2020, I started watching a couple things that I decided I didn’t need to see back in the day. There was a Ted Bundy show on Netflix or something. That’s when I thought, ‘okay, I know why I’m watching it, but are there people who look up to Ted Bundy who are watching it for another reason?’

DEADLINE: Will the unsubs all kill the same way, severing the spinal cord?

MESSER: No. We’re gonna see it mixed up. I do think the spinal cord is the gnarliest.

DEADLINE: In the premiere, we learn that something happened to Rossi’s wife.

MESSER: Yes, her death, which we will get into a little bit more later in the season. It was one of those Covid adjacent deaths. You couldn’t really go to the doctor unless it was an emergency situation. One of her yearly exams got put off and when she finally got to the doctor, they found cancer and it was advanced and it was too little, too late. Ross is really pissed off about that so he blames everything and everyone, including himself. I feel like it was important to have a representation of the grief that so many of us have experienced since the show ended, just because life has happened. I mean, it might not have been Covid related for you at all, but all of us have loved and lost and in our lives. For Joe Mantegna to bring that heartache and grief into this season, a lot of people could [relate]. A speech he gives to the young girl who they rescue at the end …. it’s really a nod to all of us who have lost someone and we are left still needing to live and not wanting to give up. The advice he’s giving her is the advice he needs to be taking himself. And he’ll get there this season. It’s not like an overnight, he’s gonna be okay by episode three, but it’s a great arc for this season.

DEADLINE: Why did Penelope, played by Kirsten Vangsness, originally leave the unit?

MESSER: She left in the finale on CBS. The last scene was her turning the lights out in the high-tech room, leaving the team. She decided to leave because she felt like there was other good in the world that she could be doing. It was her first step toward self care. We play it like they’ve been in touch, but she hasn’t come back to consult on a case until this first episode.

DEADLINE: When will we find out what was on that pink note that she left for herself?

DEADLINE: You stuck to the same episode length as if you were still on CBS. Why?

MESSER: I had to cut one down. Episode one is going to air on CBS Thanksgiving night. So that one is 43 minutes, but the Paramount+ ones are like 53 minutes.

DEADLINE: Did it feel like a struggle to fill 53 minutes?

MESSER: What was wild is that we still shot it in eight days and it was still like a 50 page script with 50 scenes, and it plays at 53 minutes. We live in the space a little bit longer. You get to be in the creepy moments longer and be in the emotion longer than you would on broadcast. I feel like our directors cuts are really getting to live in a way that they couldn’t before because we couldn’t air all 53 minutes. It’s been a really fun thing, but we didn’t change the structure of the show.

DEADLINE: You added a few more shits to the dialogue.

MESSER: There were, yes! That was the one thing that never rang true to me. I have a family full of law enforcement and they need more than “damn” a lot of times. I was really happy we could drop some of those. But at the same time, I didn’t want it to all of a sudden sound like an HBO show. I know that a lot of families watch this show and I didn’t want it to suddenly not sound familiar. But other than that, I mean, in terms of violence, we might stay in a frame a little longer than we used to, but I still am a big believer in letting your imagination fill in the blanks. I don’t like to show a whole ton of stuff. And then just the fact that we can be with one of the killers for so long, get to know him and show the complicated dynamics of his relationships at home. We’ve never really gotten that kind of insight into a killer before. Zach Gilford is just awesome and makes his character so complex.

DEADLINE: He was beloved on Friday Night Lights. How could you make him a bad guy?

MESSER: I know. That’s why I was like, ‘Oh, he won’t do it.’ I don’t know if you saw The Midnight Club, but that was my obsession last winter. Zach was like, ‘this sounds like so much fun. I never get to do anything like this. Sign me up.’ So I think he wanted the challenge of being the unexpected bad guy.

DEADLINE: How did you land on the word evolution for the title?

MESSER: It was from a Paramount+ brainstorming session. They were looking for an evergreen word that didn’t have to relate to just this season. I think it might have been a word they were using a lot when they were describing how the show has evolved. I think internally they kept using that kind of language and then they landed on Criminal Minds: Evolution and pitched it to me. It really felt pretty organic to the internal conversations we were all having.

DEADLINE: In your heart, does this season feel like a one-off or can this go on for many seasons?

MESSER : I think it could go on for as long as this group wants to do it. We’re all energized, excited, and loving what we’re doing. I think as long as we want to keep doing it, I don’t see why we shouldn’t.

DEADLINE: You know, could have gone off and written a romance for Netflix or a Hallmark Christmas movie even. But you came back to Criminal Minds.

MESSER: Oh my gosh, isn’t that funny? I do have another project that is the total opposite of this. I don’t know if you ever saw the documentary, The Biggest Little Farm, but we’re doing a doc series for Disney+. So when I’m not working with Criminal Minds, that’s where I’m spending my time, which could not be more different.