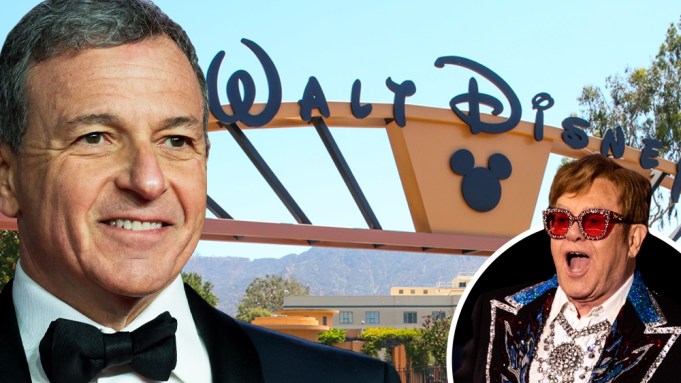 Did Someone Save Disney’s Life Last Night? Behind Bob Iger’s Stunning CEO Return & What’s Next For Media Giant

Many Disney employees woke up this morning trying to make sense of a surreal Sunday night that some say felt like a dream.

The Hollywood spectacle couldn’t have been scripted any better. As top Disney executives were filing into the Dodger Stadium hospitality tent for Elton John’s final North American concert, which streamed live on Disney+, news broke of Bob Iger replacing Bob Chapek as Disney CEO. The bombshell news sent Disney shares soaring and industry tongues wagging, but it also raises some thorny questions for the media giant despite the familiar hand taking the controls.

Chapek was expected to be at the Elton John concert, sources said, but decided to cancel by midday Sunday. His top lieutenant, Kareem Daniel, Chairman of Disney Media and Entertainment Distribution, was there but left before the concert started as people around him were reacting to the bombshell announcement, we hear.

The future of Daniel and his division instantly fell into a serious limbo, with Disney exchanging “RIP DMED” messages Monday morning. By Monday afternoon, Daniel was gone in Iger’s first major move after meeting with Disney’s senior executives all morning. The unified, streaming-centric distribution structure also is being scrapped and will be replaced by “a new structure that puts more decision-making back in the hands of our creative teams and rationalizes costs,” Iger said in a company memo.

It is unclear when exactly Chapek was told about the shakeup, some sources indicate it was Sunday in a brisk conversation with Disney board chairman Susan Arnold, who made the announcement of Iger’s return Sunday night.

As for Iger, one well-placed person told Deadline that the CEO return has been in the offing since early last week. Once Arnold — the longest-tenured board member, and someone who has managed through countless situations with Iger at the helm — reached out to the retired CEO, talks quickly bore fruit. The source also added that the 2-year term for the returning exec has flexibility, so that if a successor is unable to be identified, the 71-year-old Iger could stay at the helm longer. (Though any delays will resurrect criticism of Iger, who postponed his own retirement four times before finally going through with it in 2020.)

We hear only the very top executives at Disney had heads-up about the changeover shortly before it became official. The rest were so taken aback that many suspected a hack when the release hit their inboxes Sunday night. “The feeling quickly went from shock to elation,” one person said. Added another, “Everyone was smiling, there was a sense of relief that everything would be OK, which we hadn’t felt in a long time.”

An Unfortunate Series Of Events

One person who was reportedly not completely surprised by the outcome was Chapek, who knew there “were serious issues,” a source told Deadline. His swift fall from power — without so much as a single quote from him included in the official press release — followed a particularly bumpy stretch for the former chief. Some of the issues were not of his doing, including having to lead Disney through a pandemic, prompting one person to call him “a victim of circumstance.” But some of the problems were self-inflicted — he presided over regrettable episodes like the public fight with Scarlett Johansson and the “Don’t Say Gay” quagmire in Florida. Still, a string of events this month appeared to seal his fate, multiple insiders told Deadline, despite his receiving a contract extension in June.

On the afternoon of November 8, Disney delivered a dismal quarterly earnings report, missing Wall Street forecasts for revenue and profit by wide margins and causing its already battered stock to slide in after-hours trading. Making matters worse, Chapek came off as curiously sanguine during the company’s quarterly earnings call with analysts. Breezing past a much-wider-than-expected operating loss from streaming of $1.5 billion, Chapek declared the quarter a “turning point” en route to a more profitable future, but he didn’t come close to acknowledging the uphill climb ahead. Instead, the former theme parks division chief rhapsodized about “phenomenal” park events like the Oogie Boogie Bash and Mickey’s Not-So-Scary Halloween Party.

Earnings calls — especially Disney’s — tend to be exercises in spin, yet Chapek’s manner and remarks elevated concerns at the board level about his ability to right the ship. During the earnings call’s question-and-answer period with analysts, Chapek let CFO Christine McCarthy (a holdover from Iger’s tenure) field questions about the many challenges facing the company. Chapek’s performance on the call, in addition to getting panned by Disney potentates, was excoriated by CNBC pundit Jim Cramer. He called out Chapek’s “appalling” gloss about “how great they are” and faulted his lack of candor. “There is just no doubt that he has to go,” Cramer said. “The way he handled it, he made it sound like it was a four-star quarter. Delusional.”

Cramer’s clout isn’t what it once was, and his judgment calls sometimes go viral for the wrong reasons, but his broadside rang true inside the company, according to sources, adding to growing unease about the company’s direction.

Disney shares plunged 13% the day after the earnings report, despite the company having added more than 12 million Disney+ subscribers, with the stock at its lowest point since early 2020. It was the biggest single-day drop for the Dow component since the terrorist attacks of Sept. 11, 2001.

A few days later came a memo from Chapek to Disney leaders outlining the need for austerity, including potential layoffs along with cost reductions. The memo blindsided a number of senior execs, multiple sources indicated to Deadline, exacerbating tensions with senior executives. Some staffers described the document as “tone deaf,” with its call for a “cost structure taskforce” consisting of himself, McCarthy and General Counsel Horacio Gutierrez. The move didn’t engender trust or sit well with rank-and-file employees, we hear.

Since Chapek took the CEO baton in February 2020, there had been a growing sense of restlessness in the exec ranks and, by extension, the creative community. Chapek reorganized the company and formed a central distribution organization, with control of PLs for all film and TV projects, stripping those responsibilities from division heads in a reversal of Iger’s decentralized stewardship. He also installed Daniel, a loyalist, as the steward of the operation despite a relative lack of experience running film, TV or streaming slates.

The Nov. 11 austerity memo deepened the rift between the two main groups in the media part of the company, DMED and Disney General Entertainment as Chapek announced “a rigorous review of the company’s content and marketing spending,” signaling cuts in the areas.

He had first sent shockwaves at the company retreat in Orlando in the weeks leading to the earnings call. Instead of rallying the troops with messages of optimism and team-building, he proclaimed, with no context, that the company needed to rethink marketing and change its marketing strategy, turning the mood somber for most of the event, we hear.

There has been discontent over the fact that, in the structure created by Chapek, PL sits with Daniel’s DMED group, which controls the content spending that got Disney into the red last quarter, while it is the DGE group of the creative and marketing divisions that are being targeted for cuts.

Many both inside and outside the company had expected Iger to change the current structure. His return already was having a positive impact on company morale before his decision to dismantle DMED, with employees welcoming the cheerful tone of his staff email Sunday night, compared to Chapek’s grim memo about cuts 10 days ago. That turned into cheers when he sent Daniel packing Monday and signaled that creative teams would like it to regain control of budgets and distribution for their content, including the film studio deciding whether movies would go theatrical or directly to streaming.

Among the many challenges Iger is stepping into, linear TV is high on the list given cord-cutting rates that have accelerated to 6% a year. ESPN remains a cash cow for Disney as part of linear TV bundles. Another major decision concerns the future of Hulu, which is still 30%-owned by Comcast.

Sources at the company say Iger is keen to reach a deal with Comcast to buy out its stake, though the dynamics of the deal are daunting. According to the agreement that gave Disney operational control of the streaming service in 2019, Disney can settle out with Comcast in 2024, with pricing determined by an independent arbitrator. The vexing part is that streaming valuations, especially for mature platforms like Hulu, continue to rise, while at the same time Disney is in need of sending a clear signal it is not spending recklessly on streaming at the expense of a clean balance sheet. Proponents of accelerating the buy-out of Hulu say it will be able to lead to profitability sooner, as many people inside and outside the company expect Hulu to shift onto Disney+. (For the record, Disney has steadfastly denied that streamlining is being considered.)

Feldman and others on Wall Street expressed some reservations about the reversal, even though investors boosted Disney stock in its immediate wake. Bank of America analyst Jessica Reif Ehrlich said Chapek’s tenure included many high points and the decision to oust the exec, who was the “hand-selected successor” ushered in by Iger in 2020 “could create some near-term uncertainty on direction of the company.”

The showman part of Iger likely would have appreciated the backdrop for news of his reemergence at Disney during Elton John’s final curtain call at his farewell Yellow Brick Road tour. Even though Daniel made a swift exit, plenty of executives stayed, including DGE Chairman Dana Walden and the unit’s Craig Erwich, Ayo Davis and Shannon Ryan, taking in hits such as Rocketman, I’m Still Standing and Someone Saved My Life Tonight.

And, in a plot twist that was almost too delicious, the highest-profile casualty of Chapek’s reign, former DGE Chairman Peter Rice, was also at the concert, enjoying the show in every sense of the word.

Dominic Patten and Anthony D’Alessandro contributed to this report.