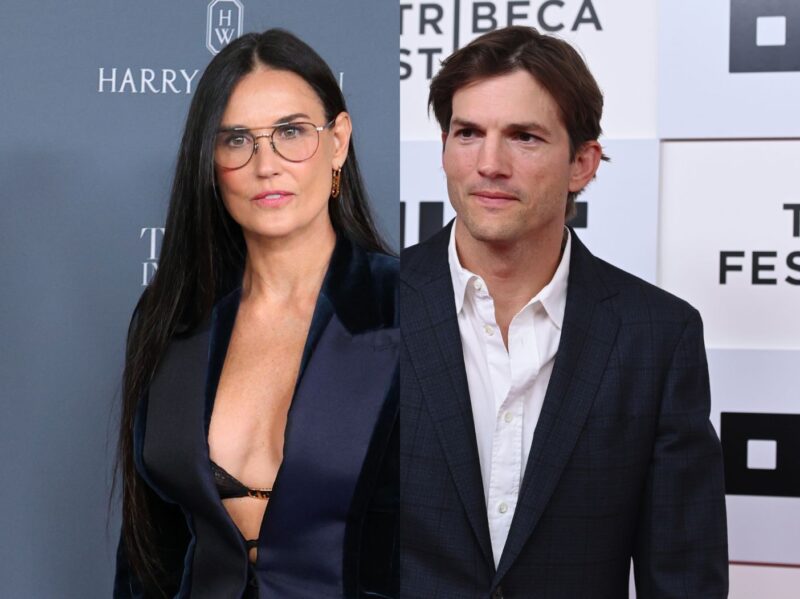 Are things getting tense between Ashton Kutcher and Demi Moore? One tabloid claims the famous former spouses are at each other’s throats. Here’s what we know about their alleged feud.

This week, Woman’s Day reports Ashton Kutcher is considering writing a memoir, and his ex-wife Demi Moore isn’t happy about it. Kutcher has become a household name due in part to his high-profile relationships with Moore and his current wife, Mila Kunis. And, according to the tabloid’s sources, publishers want to sell his story. But the article insists Moore is worried sick about what Kutcher might say about their failed marriage if given the chance to share his side of the story.

“Demi was way too nice to Ashton in her own recent book, even though he allegedly cheated on her and broke her heart,” an insider reveals. “And she’ll be expecting him to do the same. Ashton’s tech-obsessed, so if he does a memoir, it won’t just be a book. He’s been building up a multimedia storyboard of memories about his life, including with his current wife and their kids, but no self-respecting publisher would let him get away with not addressing his marriage to Demi through pictures or videos, too.”

Finally, the tipster explains that Moore is apparently prepared to take legal precautions to insure her public image stays safe. “The saving grace for Demi is he’ll want her permission, and she’s not going to let him without giving her legal team a first-draft read.”

Is Ashton Kutcher Writing A Memoir?

There are three layers to this story. According to the article, Ashton Kutcher is writing a memoir. This itself is entirely unproven. We have absolutely zero reasons to believe Kutcher is in the process of writing a memoir, and the magazine completely fails to provide any proof for this claim.

Then the tabloid’s tipster says Kutcher isn’t just writing a book; he’s allegedly creating a multi-media experience to accompany his memoir. Again, Kutcher most likely isn’t writing a memoir, so this detail only makes us even more skeptical of the tale.

And finally, the source claims to not only have insight into Kutcher’s writing process, but they also speculate about Moore’s reaction to her ex-husband’s alleged memoir. This nonsense about Moore contacting lawyers is just one red flag too many. From what we can tell, Kutcher and Moore are on good terms.

Moore recently starred in a commercial with Mila Kunis, proving there isn’t any bad blood between their families. And since Kutcher hasn’t so much as hinted at this alleged memoir deal, we’re confident that this story wasn’t true in the slightest.

The Tabloid On Ashton Kutcher

We know better than to trust Woman’s Day anywhere Kutcher is concerned. Back in 2019, the outlet reported Kutcher and Kunis’ marriage was in trouble after the actor testified in a murder trial. Then the tabloid claimed Kutcher and Kunis’ were fighting during lockdown. And more recently, the publication alleged Kunis and Kutcher were headed for a “$315 million” divorce. Obviously, Woman’s Day isn’t talking to anyone close to Ashton Kutcher.