Everything We Know About Beetlejuice 2

Say his name three times. Do it. Unlike Candyman, most people would love to summon Beetlejuice. He’s the Ghost With The Most. The film Beetlejuice became an instant classic when it haunted theater screens in the spring of 1988. Burton’s visual aesthetic, along with the amazing performances by Michael Keaton and Winona Ryder, captivated audiences. The film easily grossed over $75 Million at the box office on a $15 Million budget. People loved the character, and he even got a Saturday morning cartoon spin-off that kids loved.

If the character was so popular then where is the sequel? Talks have been brewing again that a Beetlejuice sequel is moving forward and possibly shooting this summer. With legacy sequels being all the rage right now it could be the time to do it. Believe it or not, work on Beetlejuice 2 began not long after the movie premiered. What do we know about it? First, let’s start in the past.

In 1990 Tim Burton was riding high on his Batman film breaking all sorts of records at the summer box office. He had a golden ticket to work on anything he wanted. As he was finishing up work on Edward Scissorhands, he began to turn his attention to what his next projects would be. He had another Batman film on the horizon but wanted to get working on one of his other projects. Burton hired British playwright Jonathan Gems to work on a script for Beetlejuice 2 called Beetlejuice Goes Hawaiian.

Tim Burton wanted to take the character out of the dreary underworld and put him in the colorful and sun-filled islands. The Deetz family was going to move there to open a new resort. Turns out Charles didn’t do any research and ended up building it on the resting place of a great Hawaiian Kahuna. The spirit would come back to the world of the living and cause problems for the family and surrounding citizens causing them to call in the big guns. At one point Beetlejuice even wins a surfing contest by using his magic. It seems strange but Jonathan Gems said Burton loved the idea.

“Tim thought it would be funny to match the surfing backdrop of a beach movie with some sort of German Expressionism because they’re totally wrong together,”

Keaton and Ryder both agreed to return on the condition that Burton would again be directing. Before work could get started on it Burton and Keaton got busy with Batman Returns. A few years later producer David Geffen would hire writer Pamela Norris to take a shot at rewriting the script. It eventually fell into development hell. Famously Kevin Smith was offered a chance to take a shot at it. He turned it down in favor of writing Superman Lives. When asked why he turned it down he replied,

“Didn’t we say all we needed to say in the first Beetlejuice? Must we go tropical?”

Eventually, the project died. When he was asked about the Beetlejuice Goes Hawaiian script Jonathan Gems said it was too late to make the film as Ryder had aged out of the part as it was written. They would have to recast and no one really wanted that. 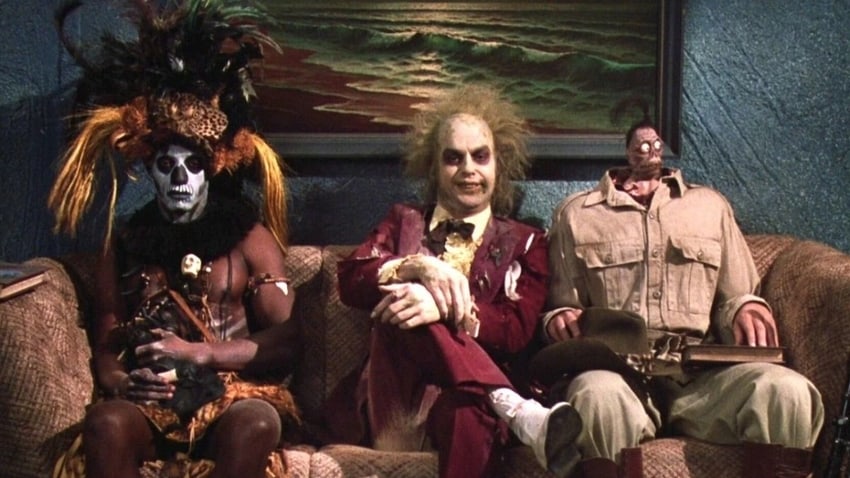 After two decades of sitting on the shelf, in 2011 Warner Bros. approached Seth Grahame-Smith about writing a new sequel and even producing it. He had worked with Burton on Dark Shadows and Abraham Lincoln Vampire Hunter previously. Smith said he signed to make sure it was “a story that is worthy of us actually doing this for real, something that is not just about cashing in, is not just about forcing a remake or a reboot down someone’s throat.” He said he had met with Keaton about doing the film, and he was on board.

They had gone over the story and Keaton seemed to be really excited to finally get back to the character. Ryder herself said that she was excited to return to the role but only if Burton and Keaton were involved. She stated that Lydia was an important part of her that she wanted to explore again 27 years later. Burton said that they had been working on the script and were excited to get started in 2014. He said he was excited to get to work with Keaton again and that it was going to film that summer.

It seemed that the sequel was moving forward and everyone was happy . . . but that window came and went and no movement happened on the film. In 2015 Ryder was on a talk show and said she was for sure coming back to the role and that she couldn’t wait to get started. By 2017 screenwriter Mike Vukadinovich was hired to do a re-write of the script. In 2019 Warner Bros. confirmed that the project was in fact sitting in the waiting room of the afterlife. 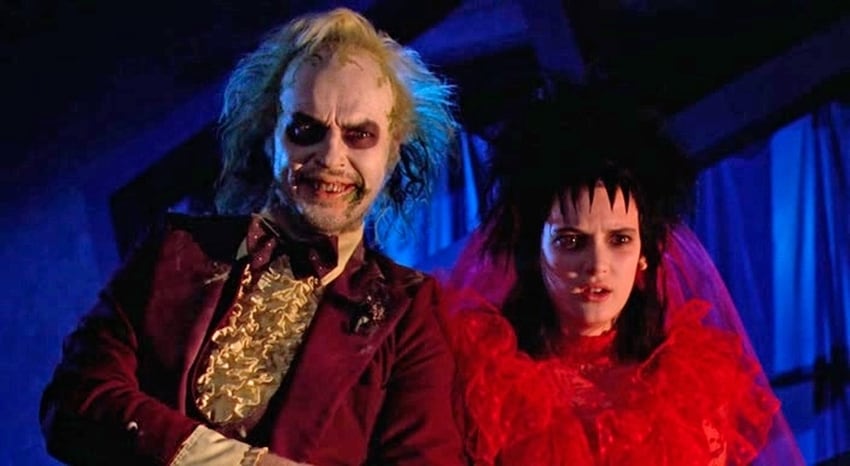 With the project once again dead on arrival there looked like no hope of ever seeing a Beetlejuice 2. Until Brad Pitt stepped in. Well, not Brad Pitt personally but his production company Plan B Entertainment. In February of this year, his company announced it’s producing the new film. It’s rumored to film this summer. What do we know about the sequel?

It’s being said that Keaton and Ryder are both reprising their roles in the film. Whether they have officially signed on or have just given a verbal confirmation to appear in the film if it gets going is unknown. Burton has stated in the past that he would only do the film if Keaton agreed to return. So if a camera does start rolling on Beetlejuice 2, it’s a safe bet Keaton will be in the black and white suit. We never thought we would see him back in the Batsuit either but it’s happening. Let’s hope he gets to keep returning to some of his favorite characters.

It’s unknown if Burton will be back in the director’s chair. He could just be on board as a producer. He currently doesn’t have anything listed on his IMDB that would prevent him from directing the film. The project is one that he was very attached to and I’m sure he would love to finally return to this world in Beetlejuice 2.

One of the big rumors recently was that Johnny Depp was going to be in the film. He had started showing up on a Google cast list for the film alongside Michael Keaton and Winona Ryder. Nothing has been announced but fans of Depp were excited to see that he might be teaming up with his favorite director once again.

The only synopsis for the film seems to be the one posted on the film’s IMDB page. With IMDB you have to take things with a grain of salt since just about anyone can update these things. But it reads,

“From critically acclaimed filmmaker and screenwriter, Tim Burton presents the long-awaited sequel to the Halloween classic. Keaton’s action-packed comedic demon returns to the silver screen for more mischief than ever before. When the Maitland house EXPLODES, so does the fun, so buckle up. The original cast and crew plus new additions return when Beetlejuice is found homeless in the netherworld. He takes it upon himself to travel back to the mortal world seeking comfort, only to find the Maitland house has blown up due to a gas leak, leaving our beloved characters without a humble home to share the love.

In search of guidance, the crew travels down to the Netherworld only to find there’s a new sheriff in these parts, The Jersey Devil (Will Arnett). Through a surprising turn of events, the self-known ladies man, Beetlejuice learns that the Jersey Devil is his long-lost son through one of his numerous love affairs. Lydia Deetz (Winona Ryder) is wooed by the enchanting Jersey Devil, despite being married to a struggling real estate agent (David Harbour). Through kooky scenarios and ecstatic characters, the fun never stops. Though entertaining, it is also a heart-wrenching tale that shows Beetlejuice is just another man trying to find his way in the world. The story also progresses the idea that a family is never truly ideal.”

The synopsis lists other actors in roles that have yet to be announced. Will Arnett and David Harbour would be fun additions to the film but who knows if it’s even accurate. If Johnny Depp were to be in the film, his character doesn’t seem to be mentioned here. If the film actually gets in front of a camera then the only thing we can think that might be true is the 2025 release date. That seems far out if it is planning on shooting this summer.

As you can see there isn’t much to go on. Until an official statement comes out of Warner Bros. we won’t know for sure what is really happening and what is purely speculation. Until then we can always go back and watch the original or wait until we get to see Keaton back in the Batsuit when The Flash finally hits theater screens next year.

Are you excited to see Beetlejuice 2? Let us know in the comments.