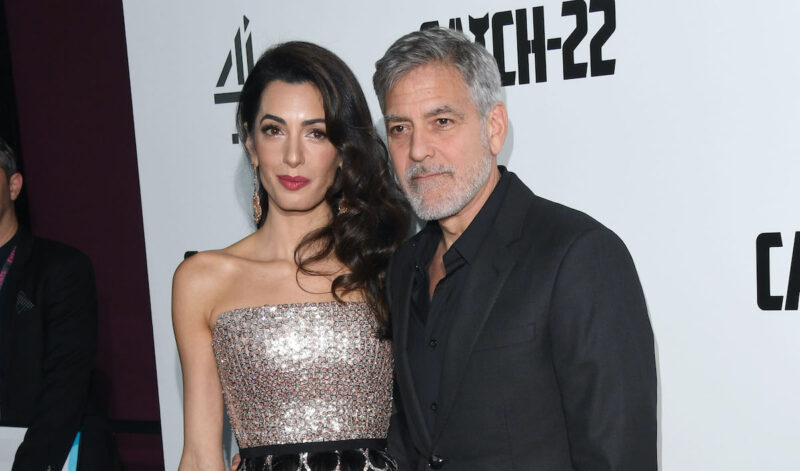 The report said the Clooneys were in relationship hell.

Were George and Amal Clooney on the verge of divorce last year? Twelve months ago, one tabloid claimed that the famous couple’s marriage barely survived quarantine. Let’s check back in on the Clooneys.

Last May, the Globe reported that things were tense in the Clooney household. Apparently, George and Amal were so used to keeping busy outside of the house that the close quarters they were forced to share during quarantine were killer for their marriage. “These past few weeks have been hell on earth for the Clooneys!” an insider dished at the time. “George is not taking well to being bossed around and Amal’s finding it suffocating and tedious having to clean up after him.”

And since the couple is notorious for collecting real estate, they used to have the luxury of skipping town to get away from each other any time they pleased. But quarantine was apparently forcing the Clooneys to take a hard look at their marriage, and sources feared that their union may not survive it. “Pals fear the simmering bad blood will boil over into a $500 million divorce,” one tipster noted. “Ultimately, neither of them wants a divorce, but they’re so set in their own ways and have a tough time compromising over the issues that bug them about each other,” the other source concluded.

Did The Clooneys File A $500 Million Divorce?

We’ve heard this many times before: Amal is controlling, George is a lifelong bachelor, and they have never agreed to compromise on either of their lifestyles. That’s the version of the Clooneys that the tabloids often report on, and we’ve gotten to know them pretty well. But here’s the catch: They’re a complete work of fiction. Amal and George Clooney have never given us any reason to buy into this narrative, so it baffles us how the magazines keep running with it.

Back in 2020 when an interviewer asked George how he had been handling quarantine, he responded: “Here at the house, I’ve got an amazing wife and two funny knuckleheads that make me laugh, and I get to wake up with them every morning and put them to bed every night.” Clearly, he and Amal were never near divorce over his cleaning habits. The actor once even said that he and Amal have never had a full-blown fight. Obviously, we had no reason to buy this story a year ago when it came out and even less reason to now.

The Tabloid On George And Amal Clooney

This is far from the first time that the Globe invented trouble for the Clooneys, and it certainly wasn’t the last. The outlet claimed again that Amal hit George with a $570 million divorce threat. Then the magazine reported George and Amal were arguing over whether or not to have another baby. And more recently, the publication alleged that the Clooneys were sleeping in separate rooms. Obviously, the Globe doesn’t really know anyone close to George and Amal Clooney.