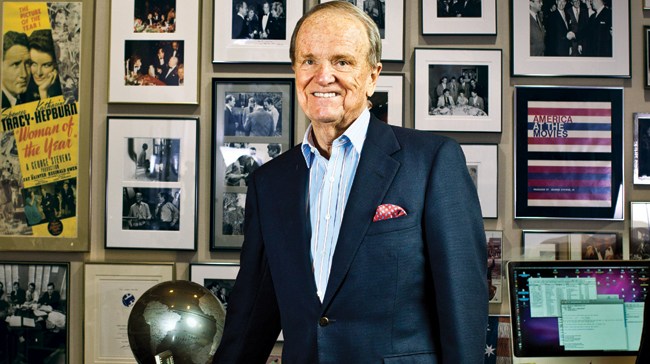 George Stevens Jr. Looks Back On AFI, Kennedy Center Honors, A Family Legacy And A Career From Hollywood To D.C.

With two days to go until Christmas, I can’t think of a better gift for film lovers or those with an interest in iconic forces in the entertainment industry than the 2022 autobiography My Place in the Sun , which chronicles the life of George Stevens Jr — now 90 and still going strong in a remarkable career that has traversed the highest corridors of Hollywood to Washington, D.C.

Most significantly, however, it is the story of a father and son. The father is legendary two-time Oscar-winning director George Stevens, whose films ranged from Astaire and Rogers musicals, Gunga Din, The More the Merrier and Woman of the Year, to, following World War II, a string of immortal classics including A Place in the Sun, Giant, Shane and The Diary of Anne Frank. George Jr. spent a lot of time on some of those sets right up to 1965’s The Greatest Story Ever Told, on which he was an assistant director. But not only because of his name but also a desire to prove himself, he had to get out from under the shadow of a famous dad and make his own mark, finding as the title of the book says “my own place in the sun.” Boy, did he ever, and this book is a fascinating testament to that. His impact is still felt today, in fact, right around the season we are celebrating right now.

Stevens Jr. is the founding director of the American Film Institute, which among many other things will be honoring those selected for the prestigious AFI Movies and TV Programs of the Year on January 13. He also created the equally prestigious AFI Life Achievement Award, which first went to John Ford in 1973 and most recently in June to Julie Andrews. Next week brings the telecast of the Kennedy Center Honors on CBS, from a ceremony held in D.C. earlier this month and, as always, attended by the creme de la creme of Washington and show business power including President Biden (every President except, ahem, Donald Trump made this a must-attend), and it was Stevens who also created it and produced every one of them until 2014. Under President Obama, Stevents served as co-chair of the President’s Committee on the Arts and Humanities.

He has won 15 Emmys, eight WGA Awards, two Peabodys, the Humanitas Prize and a 2012 Honorary Oscar among many others. I love his previous book, Conversations With The Great Moviemakers of Hollywood’s Golden Age, another must-read for film fans.

Getting out from under that shadow of his father wasn’t easy, but as this book tells it began in earnest when legendary broadcaster Edward R. Murrow recruited him to elevate the Motion Picture Service at the United States Information Agency in the 1960s. It led to a golden era indeed for that, and to his efforts at AFI in raising the profile of motion pictures as art. As a filmmaker himself, he made the extraordinary and highly praised documentary on his father, George Stevens: A Filmmaker’s Journey (Warren Beatty told him it was the best ever made about a moviemaker), as well as the docu on his dad’s war experiences, George Stevens: D-Day to Berlin. His Thurgood Marshall TV biopic Separate But Equal starred Sidney Poitier, and a Broadway play he wrote, Thurgood, had a successful stage run.

There is so much more here, filled with fascinating anecdotes and encounters, but at its heart, like those documentaries, his relationship with his father, and how it helped define the son who would go on to his unique success, is at its center.

I got a chance to have lunch with Stevens and, even at 90, his total recall of a wonderful life was a privilege to hear. I asked him why he decided to write this book, and particularly quoted back to him the definition of George Stevens Jr. that Annette Bening gave when presenting that honorary Oscar: “Producer, playwright, activist, politician, archivist, champion, gatekeeper, benevolent despot, artist, author, mentor.” So which one does he think he is?

“Well, you know, I think that’s kind of what I’m kind of pleased about the book,” he said. “Often in my life it’s ‘Oh, yeah, you started the AFI’ or ‘Oh, you did the Kennedy Center Honors,’ but my life really has so many different aspects, as Annette spoke, and it’s kind of a good feeling to get it ordered. And I have been thinking, I haven’t discussed this, talked about this, but thinking about it, I am kind of an introspective…I’ve never been to a psychiatrist. It’s always been kind of one foot after the other, and so, the idea of doing this and putting your life in order has been fun.”

One life lesson learned around going to the 1952 Oscars ceremony, where his dad would win Best Director for A Place in the Sun, was a particular highlight for me in reading the book. Stevens recounted it:

“You know, going with my father to the Oscars, he drove the car. My mother and grandmother, his actress mother, in the backseat, Georgie Cooper, and I sat next to him. And Joseph Mankiewicz comes out, the winner, I guess, from the previous year and he read the nominees. John Huston for The African Queen, William Wyler for Detective Story, Vincente Minnelli for An American In Paris, Elia Kazan for A Streetcar Named Desire, and George Stevens for A Place In The Sun.

“And going home, and this is something I remembered that I didn’t put significance on then, it was just I remember this was what my father said as we’re riding home in the car, and he looked over at me and he said, ‘We’ll have a better idea what kind of a picture this is in about 25 years.’

“You know, he’d grown up in the theater, never finished high school, but he read O’Neill and educated himself, and he knew that, and this is before DVDs. He knew he was talking about the test of time. It was 1952. He did not know he was talking to the future founder of the American Film Institute. But you know, that idea was at the core of the AFI, preserving film, the Life Achievement Award, the test of time. So you kind of have these experiences in your life, that you remember, that you don’t really realize how, in that case, how significant that was for me.”

Stevens, between all his times on both coasts, truly appeared like he cloned himself — he seemed to be everywhere. In fact, when Steven Spielberg read the book, he said he was just like Zelig. But where is this man more at home? “I am comfortable in both places. An you know this is where I was born in the Hollywood Hospital for God sakes,” he laughed. “I don’t know who was earlier in a bicoastal sense, if anybody, but when I was in USIA and then that led to AFI, both required me to be in both places.”

He points out another life lesson from his father, as they were making Greatest Story Ever Told and he got the opportunity presented by Murrow on USIA. “It was a father realizing, to his own great inconvenience because I was at that time on the film a valuable ally in a very ambitious enterprise, but you know he was teaching me to be a father too, that it was not his interest, it was my interest, and he saw, better than I then, that it might be the best thing for me to do,” Stevens recalled.

In creating the Kennedy Center Honors where the recipients never have to give a speech, he cited another life lesson he used to write this book. He calls it Cary Grant’s Law, which says that nobody has to speak or perform, because Grant would never accept an award if he had to make a speech. “He never accepted the AFI Award,” he said, although I would add the notoriously interview-shy Grant did give a speech alas in accepting an Honorary Oscar. “Also, I didn’t think people should have to sing for their supper,” Stevens says. “So, you come to D.C. for the weekend. The artists never have to say a word.

“But now writing this book, I also had another Cary Grant Law. I said, ‘If I don’t have a really good story about Cary Grant, he’s not going to be in this book’. This is not a name-dropping book, so there are a lot of people who aren’t in this book who I cared a great deal about, and were important to me, but you know, those stories didn’t come up. But I now realize that my life, with the combination of Hollywood and people I knew, and doing 37 years of the Kennedy Center Honors, we honored 188 of the greatest artists in that period, and in Washington, politicians, Liz [his wife] and I had the widest range of associations and friends, and that’s what populates this book, that we’ve had the good fortune, and I was able to write about it.”

As for what comes next in a profession that he points out values youth?

“You know, I’ve got stuff that I’m interested in doing. I’ve got a quote in the book, that I came upon years ago having no appreciation of how timely it would become. It was from Bertram Russell’s The Pros and Cons of Being Ninety. He wrote, ‘a long habit of work with some purpose that one believes is important is a hard habit to break.’ And you know, I’ve never not had projects. I mean, some of them happen.”