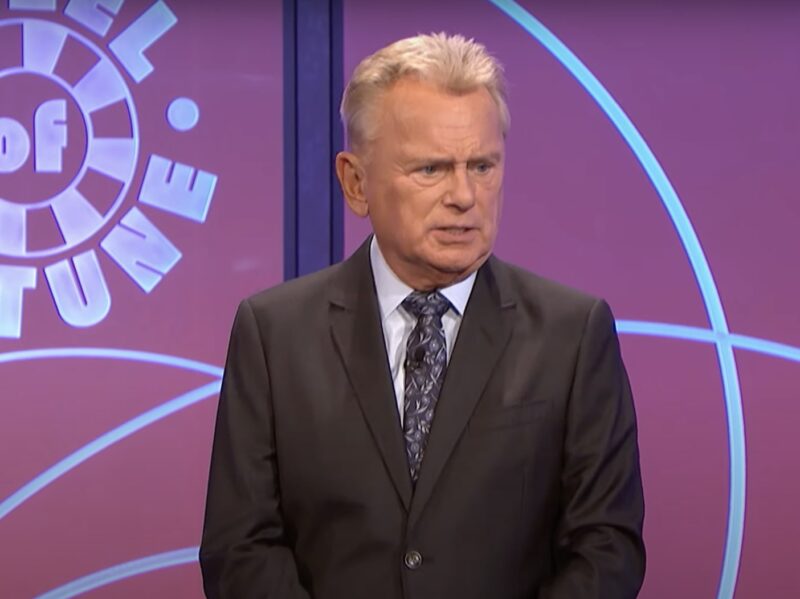 Sajak has made a few slips in the last few months.

Is Pat Sajak on the chopping block? One tabloid claims the longtime Wheel of Fortune host is on the outs with producers. Here’s what we know about Sajak’s fate on the show.

‘Pat Sajak’s Back Is Against The Wall’?

This week, the Globe reports Pat Sajak has become embroiled in one controversy too many. Apparently, as fans call for Sajak’s head, producers are considering cutting ties with the game show host. But sources say Sajak is standing his ground. “Pat’s a sensitive guy and finding all the pressure and daily attacks too much to take,” an insider spills. “He acknowledges he’s angered some with his dry sense of humor, but to paint him as this insensitive a**hole who deserves to be fired is a step too far—and he’ll be damned if this is going to taint his legacy.”

The magazine specifically references a recent incident where Sajak asked Vanna White if she ever watched opera “in the buff.” The awkward moment incited backlash online, but Sajak is supposedly pushing back against his critics. “Pat’s feeling is everyone makes a mistake now and then, and he’s only human, and people should back off because he’s not going to take this crap any longer,” the tipster concludes.

It’s hard to pin down what this dubious report is actually saying. Is Pat Sajak quitting? Is he being fired? Or is he just pitching a fit on set? The outlet seems to hint at all three possibilities without ever committing to one. And when publications play coy during stories like these, that’s usually a good sign that it doesn’t really have anything to say.

And that certainly seems to be the case here. Every instance that the magazine brings up for Sajak’s slip-ups happened over a month ago. If Sajak hasn’t faced any consequences now, we doubt he ever will. And that’s because, in the big picture of Sajak’s career, the host’s faux pas are few and far between. Sajak has held his position for decades—far longer than any other game show host’s career—and it’s entirely possible that he’s on his way out. But, from what we can tell, he isn’t being pushed.

The Tabloid On Pat Sajak

The Globe has been out to get Pat Sajak for a long time now. Earlier this year, the outlet reported Sajak was getting axed after the network snubbed his 40th anniversary as host. Then the magazine claimed White was being positioned to replace Sajak. And more recently, the tabloid alleged Sajak was counting his days at the show after making a crude comment to White on-air. Clearly, the Globe is betting on Sajak’s failure, and it can’t be trusted to report accurately on the host.