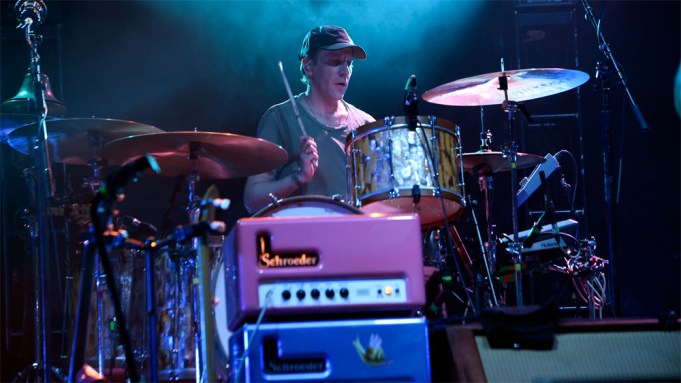 “Some of you may have already heard, but I figured it would be good to hear the news directly from our camp,” Brock wrote on Instagram (see the post below). “Jeremiah was diagnosed with cancer a short while ago, and he’s currently in treatment. It seems to be going smoothly and making a positive difference. Jeremiah, as am I, are believers in the power of positive energy, so if you would be so kind as to send ‘good vibes’ (to quote Jeremiah) in the direction of Jeremiah and his family, that’d be great. Thank you and love.”

He did not reveal the type of cancer Green, 45, is battling.

Born on March 4, 1977, on Oahu, Hawaii, Green formed Modest Mouse in Washington State in 1992 with Brock and bassist Eric Judy, who stayed with the group until 2012. The band broke through with its 2000 third album, The Moon Antarctica, which went gold in the U.S.

Green took a year-plus hiatus from Modest Mouse in 2003-04 and did not play on its breakout 2004 disc Good News for People Who Love Bad News, which peaked at No. 18, went platinum and featured the group’s first hit single “Float On,” which topped Billboard’s Alternative Songs chart and reached No. 68 on the Hot 100.

Green was back behind the drum kit for the group’s follow-up set, 2007’s We Were Dead Before the Ship Even Sank, which hit No. 1 on the Billboard 200 and spawned the alt-rock top 10 hits “Ocean Breathes Silly” and “Dashboard.” Its 2015 album Strangers to Ourselves reached No. 3, fueled by another alternative rock chart-topper, “Lampshades on Fire.”

Modest Mouse’s most recent album, 2021’s The Golden Casket, featured the band’s third No. 1 alternative single, “We Are Between.”