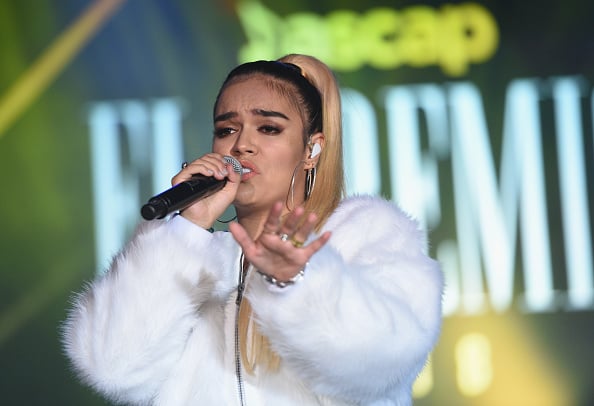 What is Karol G's Net Worth?

Karol G is a Colombian reggaeton singer and songwriter who has a net worth of $8 million. Karol G first gained national recognition as a teenage contestant on the Colombian version of the television music competition show "The X Factor." She went on to have her breakthrough in 2017 with the hit single "Ahora Me Llama," a collaboration with Puerto Rican artist Bad Bunny. Karol G has since released such international hit songs as "China," "Tusa," and "Mamiii."

Karol G was born as Carolina Giraldo Navarro on February 14, 1991 in Medellín, Colombia as the youngest of three siblings. At the age of 14, she competed on the Colombian version of "The X Factor," gaining her first taste of national fame. A few years after this, she landed her first record deal with Flamingo Records and Diamond Music, and chose Karol G as her official stage name.

After signing her record contract, Karol G released such songs as "En La Playa," "Por Ti," "Dime Que Si," and "Mil Maneras." While attending the University of Antioquia, she provided backup vocals for a number of other artists, notably the reggaeton performer Reykon. Karol G subsequently traveled to Miami, Florida for a meeting with Universal Records; however, the label declined to sign her due to the belief that a female artist would not be successful in the genre of reggaeton. Following this, Karol G chose to tour throughout Colombia at festivals, colleges, and clubs to promote herself. The publicity she attracted eventually resulted in a collaboration with rapper Nicky Jam in 2013.

In 2014, Karol G moved to New York City and enrolled in music business administration courses. That year, she had a hit in Colombia with her song "Ricos Besos." Later, in 2016, she signed to Universal Music Latin Entertainment and released the songs "Hello," "Casi Nada," and "Muñeco de Lego."

Karol G had her breakthrough in May of 2017 when she partnered with Puerto Rican artist Bad Bunny on the song "Ahora Me Llama." Peaking at number 10 on the Billboard Hot Latin Songs chart, the single also amassed over 700 million views on YouTube. "Ahora Me Llama" was featured as the lead single of Karol G's debut studio album, "Unstoppable," which was released in October of 2017. The album debuted at number two on the Top Latin Albums chart. In 2018, Karol G had further hits with her songs "Mi Cama" and "Culpables," the latter of which featured Puerto Rican rapper Anuel AA.

Karol G reunited with rapper Anuel AA in early 2019 for the single "Secreto," which made it to number 68 on the Billboard Hot 100 and number five on the Hot Latin Songs chart. Later, in May, Karol G released her second studio album, "Ocean." The album, which debuted at number 54 on the Billboard 200, was supported by the singles "Pineapple," "Culpables," Mi Cama," "Punto G," and "Créeme." Karol G went on to record the song "China" with Anuel AA, Ozuna, J Balvin, and Daddy Yankee. A huge hit, "China" debuted at number two on the Hot Latin Songs chart before making it to number one in late 2019. Also in late 2019, Karol G released "Tusa," the first single from her upcoming third album "KG0516." Featuring Nicki Minaj, the song went on to earn Latin Grammy Award nominations for Record of the Year and Song of the Year.

In 2020, Karol G released the single "Follow"; she also collaborated on the song "X" with the Jonas Brothers. Later in the year, she released "Bichota," the lead single from her upcoming album. She finally released that album, "KG0516," in March of 2021. Almost a year later, Karol G had her biggest hit yet with the song "Mamiii," a collaboration with American singer Becky G that cracked the top 20 of the Billboard Hot 100.

Karol G's music has been commonly classified as belonging to the reggaeton and Latin trap genres. At the same time, she has experimented with a myriad of other genres, including the Brazilian genre sertaneja. Influences of sertaneja can be heard in Karol G's collaboration with the Brazilian duo Simone Simaria on the song "La Vida Continuó."

In terms of musical artists who have inspired her, Karol G has cited Selena, Shakira, and Beyoncé as primary influences. She has also mentioned the influence of such varied artists as Spice Girls, Backstreet Boys, Christina Aguilera, Jerry Rivera, and the Red Hot Chili Peppers.

In the summer of 2018, Karol G met Puerto Rican rapper Anuel AA when they were filming the music video to their song "Culpables." Early the next year, the two announced that they were in a romantic relationship. A little later, at the Billboard Latin Music Awards in April of 2019, it was confirmed that the couple was engaged when Karol G showed up wearing a diamond wedding ring. However, in April of 2021, Anuel AA announced that his relationship with Karol G had ended.