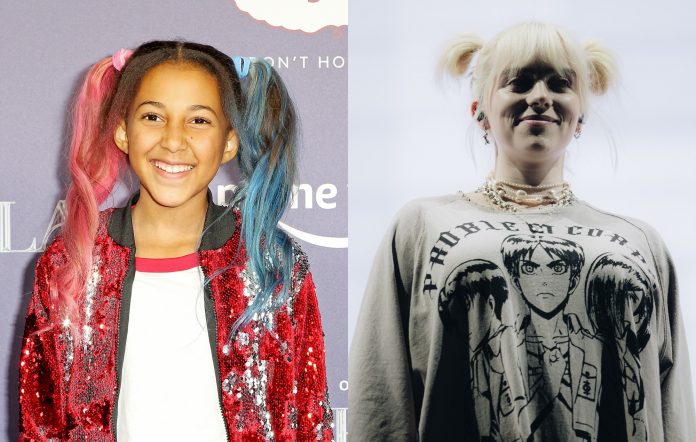 Nandi Bushell has said she wants to jam with Billie Eilish and become Prime Minister of Great Britain in a New Year’s post.

Writing on Instagram, the 11-year-old drum prodigy said: “My New Years Message to you all is keep trying! Never give up! You CAN do anything you put your mind to!”. She then added that she “would LOVE to jam with Billie Eilish and one day be Prime Minister of Great Britain.”

Recently Bushell covered Eilish’s Happier Than Ever’ and released original song ‘The Children Will Rise Up’ alongside Tom Morello’s son Roman. The pair wrote the song together to empower young people to push for more action to fight climate change.

She, Roman and the iconic Rage Against The Machine guitarist had jammed together a month earlier while the accompanying music video stars Morello along with Jack Black and climate change activist Greta Thunberg.

Bushell has also shared a video of her improvising along to the Fatboy Slim classic ‘Right Here, Right Now’.

The drum icon has quickly made a name for herself with impressive drum covers of classic rock anthems but as a New Year’s treat, Bushell filmed herself improvising to the 1999 dance hit.

“I watched Nelly Cook,  (daughter of Zoe Ball and Fatboy Slim) DJ’ing on YouTube and was inspired to have a go at improvising over a #dancemusic song,” wrote Bushell. “It was a lot of fun and nice to try something different on my musical quest.”

Check out the trailer for Fatboy Slim's 'Big Beach Bootique' - the world's "biggest cinema dance party" - and it's for one night only, on August 31st. For more information, visit fatboyslim.net.

In recent months, Bushell has covered tracks like ‘Gimme Shelter’ by The Rolling Stones, ‘Numb’ by Linkin Park, ‘Duality’ by Slipknot‘and taken on her “most challenging drum cover” with a full-length take on Tool’s ‘Forty Six 2’.

Bushell’s also teamed up with Queen’s Roger Taylor, Beatles icon Ringo Starr and the Arctic Monkeys’ Matt Helders (who she also interviewed), as joined Foo Fighters for a live performance in LA.

Bushell said that playing with the Foo Fighters was “the best night of [her] entire life”, while Dave Grohl said that watching her play the drums was “the true meaning of rock’n’roll”.