The journalism world lost a legend this week.

Barbara Walters passed away at the age of 93. According to TMZ, the trailblazing news anchor died at her home in New York City on Friday. Her rep Cindi Berger said in a statement to People:

“Barbara Walters passed away peacefully in her home surrounded by loved ones. She lived a big life. She lived her life with no regrets. She was a trailblazer not only for female journalists, but for all women.”

Heartbreaking. Since the news of Barbara’s death broke, many people took to social media to remember her, including some of her former co-hosts from The View. Meghan McCain wrote:

“Barbara Walters will always be known as a trail blazer. Her hard hitting questions welcoming demeanor made her a household name and leader in American journalism. Her creation of The View is something I will always be appreciative of. Rest in peace you will forever be an icon.”

“You single handedly changed my life and the life of every other female journalist by leading the way for us all. May you rest in peace and in power and beauty you amazing woman!” 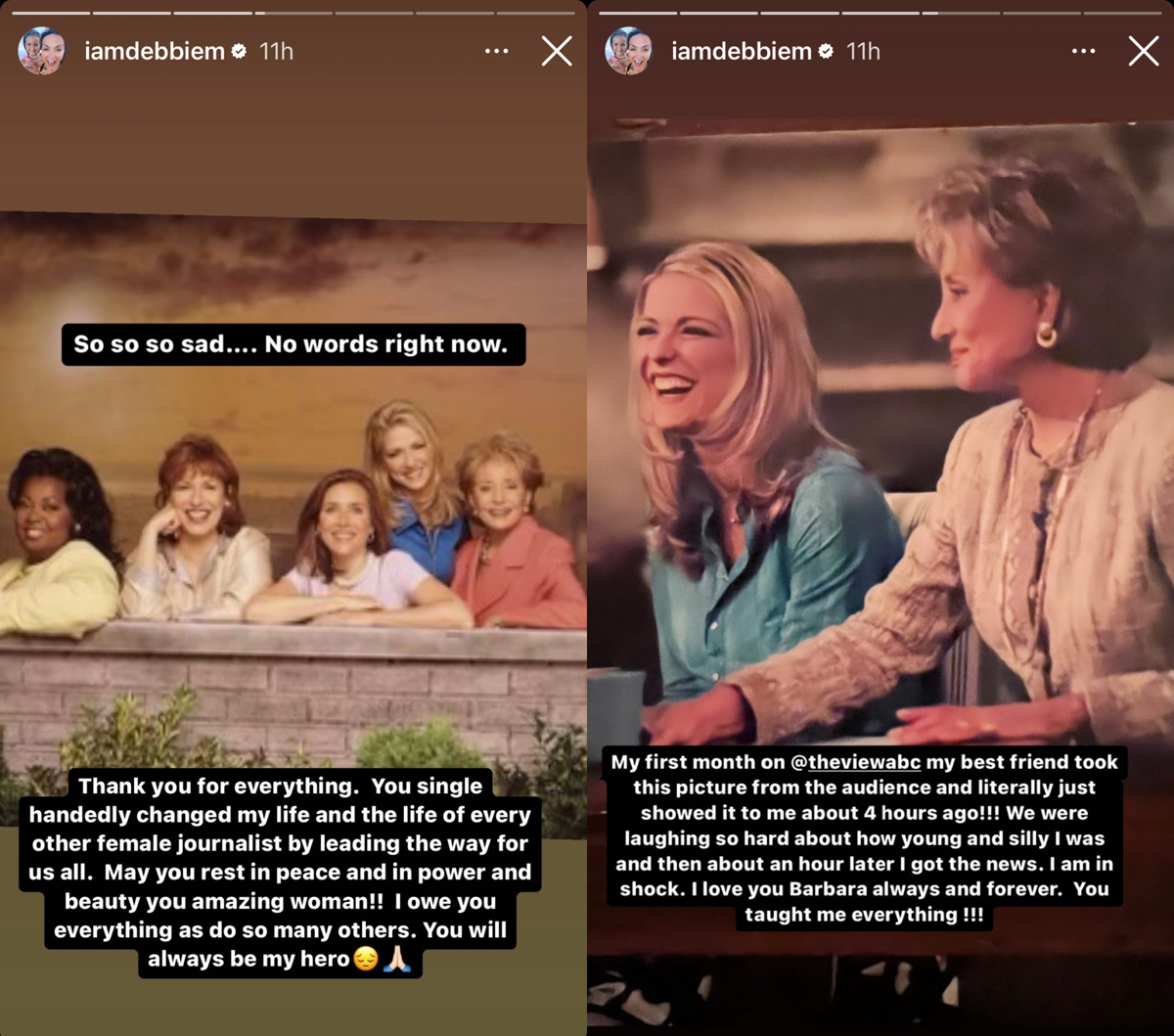 “You paved the way for all of us, dear Barbara. What an honor it has been to know you and to have been the beneficiary of your titanic spirit and wisdom.”

Rosie O’Donnell shared a video on Instagram and recalled some fond memories she had with her former colleague, adding:

“Although 93, who wouldn’t take that, what a long, eventful, and legendary life she had … May she rest in peace, and may everyone remember what barrier she broke down for women. She really did, she was the first, and will always be remembered.”

Meanwhile, Oprah Winfrey praised the newscaster for paving the way for her and many other women in the industry,

“Without Barbara Walters there wouldn’t have been me—nor any other woman you see on evening, morning, and daily news. She was indeed a Trailblazer. I did my very first television audition with her in mind the whole time. Grateful that she was such a powerful and gracious role model. Grateful to have known her. Grateful to have followed in her Light.”

Reese Witherspoon called Barbara “a legend and a trailblazer” on Twitter, adding:

“Barbara Walters always exuded intelligence and grace in every encounter. Her curiosity and kindness came through in every interview. Every time I was interviewed by her, I felt her genuine warmth. Sending so much love to her family and fans.”

What a legend and a trailblazer! Barbara Walters always exuded intelligence and grace in every encounter. Her curiosity and kindness came through in every interview. Every time I was interviewed by her, I felt her genuine warmth. Sending so much love to her family and fans. pic.twitter.com/8QAFO86W1c

Without a doubt, Barbara has impacted so many people throughout her long and impressive career. We are keeping Barbara’s loved ones in our thoughts during this difficult time. Rest in peace. You can see some more of the tributes to the iconic reporter (below):

She was a pioneering television icon that shattered many glass ceilings as a woman in the industry, including creating 'The View' in 1997 to champion women's voices. We're proud to be part of her legacy. She’ll be forever remembered and missed.

Deb I are so sad that Barbara Walters passed away. She was a trail blazer, wickedly funny, generous, open hearted and a good friend. She also gave some of the most memorable dinner parties we’ve ever been to. Get ready heaven, Barbara’s coming to spice things up. @Deborra_lee pic.twitter.com/pQfLSG5m7a

Rest In Peace, Barbara Walters. Thanks for helping me find my voice. pic.twitter.com/w6V5KhqMlC

An unwavering journalist. A fearless trailblazer. A faithful friend.

You’ll be missed by all. pic.twitter.com/a2Z3LKVvQo

#BarbaraWalters was a trailblazer. She was a mentor to me as well as a friend. So many women broke into the news business because she did her job well.

The Legend. The Blueprint. The Greatest. Rest in Peace Barbara Walters pic.twitter.com/RODzfKMAxw

Barbara Walters was a true trailblazer. Forever grateful for her stellar example and for her friendship. Sending condolences to her daughter and family.???????? https://t.co/vKjvFJTU6u

I owe Barbara Walters more than I could ever repay. Rest well sister…mother…friend…colleague…mentor.

Barbara Walters was an American institution. As the first female national news anchor, she opened the door to endless possibilities for so many girls who wanted to work in TV, myself included. Her impact cannot be overstated. I’ll miss you, Barbara. Thank you for everything. pic.twitter.com/HokDilM6Rj

Barbara Walters never flinched when questioning the world’s most powerful people. She held them accountable. She cared about the truth and she made us care too. Fortunately, she inspired many other journalists to be just as unrelenting. We are all better off because of her.

So often we toss around the words icon, legend, trailblazer – but Barbara Walters was all of these. And perhaps, above all else, Barbara Walters was brave. She paved the way for so many – we learned from her – and remain in awe of her to this day. RIP, Barbara. pic.twitter.com/ovmtCebcGe

An amazing woman. Amazing loss. Shattering the glass ceiling is a huge understatement. She decimated it. Paved the way for so many. I feel very proud/humble to have known her to have worked with her. Condolences to her loved ones the entire @TheView family. #RipBarbaraWalters https://t.co/oWfGnck8bW

Waking up in London to the news of Barbara Walters’ passing. She challenged the powerful and the famous without hesitation, and she nailed them with the truth like no other. A towering figure in our media, she will be missed.

Keep ‘em on their toes in the great beyond, Barbara.

“so tell me, monica, how do you feel …etc etc.” she was the very first person with whom i ever sat for a television interview… and will certainly be my most memorable. barbara will be missed by many — including me. sending love to jackie, george + her other friends.#RIPBarbara

A true trailblazer and icon ! She lived a full life and leaves behind such a powerful legacy. Rest in peace, Barbara Walters. pic.twitter.com/nn6c5JWd6h