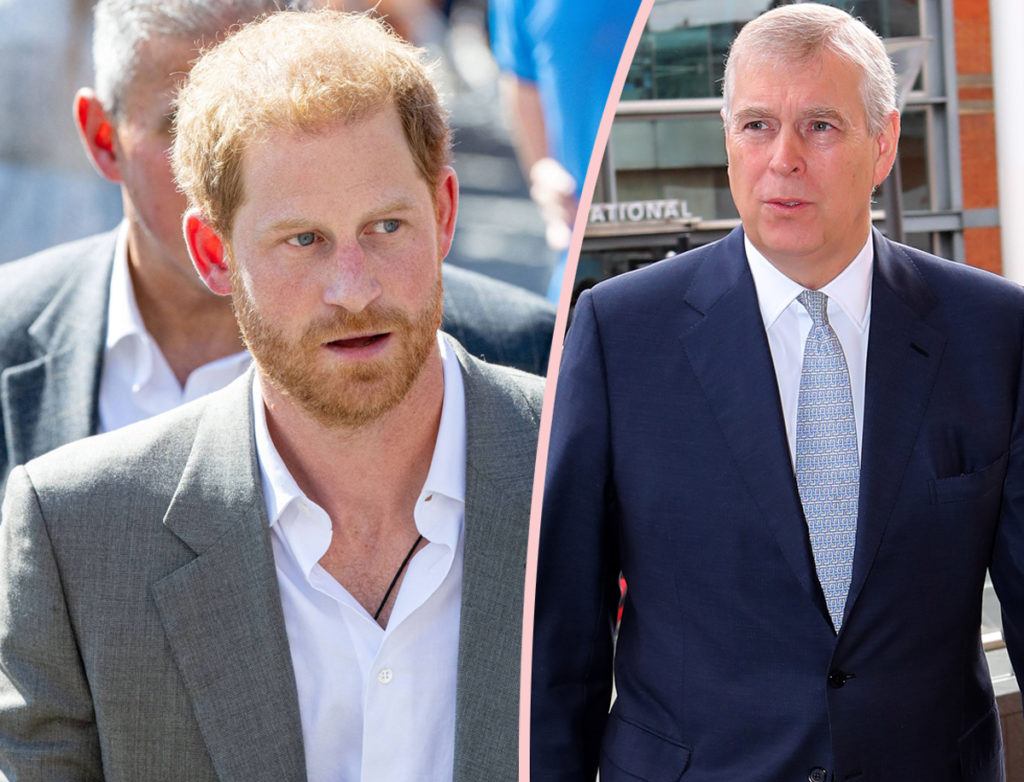 Prince Harry cannot believe he’s had to fight so hard just to have palace security for his family.

According to an excerpt from his upcoming memoir Spare, per Us Weekly, the 38-year-old recalled insisting to Meghan Markle they’d still be protected after stepping down from their roles as senior royals in 2020. Considering his uncle Prince Andrew was allowed to keep his security detail despite being in the middle of a massive sexual assault scandal, Harry didn’t think the couple would need to worry about whether or not they’d have it! He wrote in the book:

“Never. Not in this climate of hate. Not after what happened to my mother [Princess Diana]. Also, not in the wake of my Uncle Andrew. He was embroiled in a shameful scandal, accused of the sexual assault of a young woman and no one had so much suggested that he lose his security. Whatever grievances people had against us, sex crimes weren’t on the list.”

Related: King Charles Pleaded With Harry William To Not Make His ‘Final Years A Misery’

After scaling back on their duties, however, the Duke and Duchess of Sussex did lose their security team — something Harry believed was the palace’s “obligation” and “its implicit promise.”

As you know, Prince Andrew was stripped of his military affiliations and royal patronages in January 2022 after being accused of sexual assault by Virginia Giuffre, who was a victim in Jeffrey Epstein and Ghislaine Maxwell’s sex trafficking ring. The Duke of York vehemently denied allegations, but he later settled the civil lawsuit with Virginia – reportedly for £12 million and without accepting liability.

While King Charles III seemingly has been cutting ties with Andrew when it comes to the Firm after the scandal, it sounds like there’s a chance the monarch is still paying for his security. According to a report from The Telegraph last month, the disgraced royal was “furious” because he was set to lose his taxpayer-funded Metropolitan Police protection. However, the 74-year-old stepped in to make sure his brother was protected and planned to shell out the money for security. Wow…

Meanwhile, Prince Harry has been fending for himself when it comes to his family’s safety. Last year, the Archewell founder shared he was not allowed to personally fund police protection for Meghan and their two children – Archie and Lilibet – while in the UK:

“Prince Harry inherited a security risk at birth, for life. He remains sixth in line to the throne, served two tours of combat duty in Afghanistan, and in recent years his family has been subjected to well-documented neo-Nazi and extremist threats. While his role within the Institution has changed, his profile as a member of the royal family has not. Nor has the threat to him and his family.”

Harry then noted that the pair’s personally funded security detail could not “replicate the necessary police protection needed whilst in the UK.” Given that the former head of counterterrorism for the Met Police said there were “disgusting and very real” threats made against Meghan and Harry in the UK, how do the royals justify their decision to not provide the pair security while still giving it to Andrew?!

What are YOUR thoughts on the matter, Perezcious readers? Let us know in the comments below!