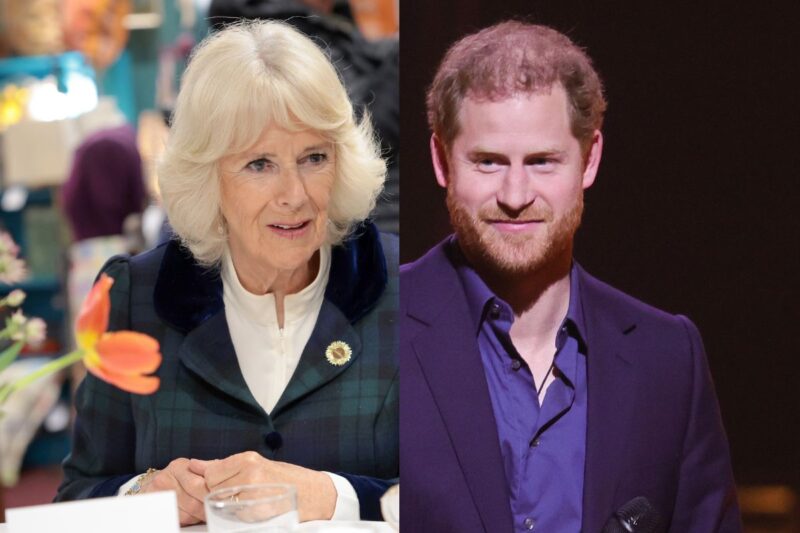 Prince Harry Supposedly ‘Will Do Anything’ To Keep Camilla Parker Bowles From Being Queen, Royal Gossip Claims

Is Prince Harry determined to stop Camilla Parker Bowles from taking the throne? One tabloid claims the Duke of Sussex is playing dirty against his stepmother. Let’s take a closer look at this royal feud.

This week, the National Enquirer reports Prince Harry has no intention of letting Camilla Parker Bowles become queen consort. According to the tabloid, Harry actually plans to use his upcoming memoir to assassinate Bowles’ character, effectively ruining her chances to take the throne. “Make no mistake, Camilla is in Harry’s crosshairs,” an insider dishes. “He blames her for everything bad that’s happened in his life—from being the other woman in his parents’ divorce to the death of his beloved mother, Princess Diana, in a Paris car crash.”

And now that Queen Elizabeth has effectively awarded Bowles with the title of queen consort, Harry is reportedly planning to intervene. “Harry must be seething that Her Majesty gave in to Charles’ persistent pleas to reward his loyal former mistress with the ultimate title,” the snitch whispers. “We believe Harry will do anything to trash Camilla and stop her from becoming queen and settle an old score for his beloved mom.”

Of course, the tabloid reveals that Harry’s hatred for Bowles actually stems from his wife, Meghan Markle. Apparently, Harry used to adore his stepmother, but Markle stepped in and turned everything sour. And now, the royals should brace for the duke’s upcoming memoir. “Harry is a loose cannon,” the tipster explains. “He knows the royals’ deepest secret, scandals, and lies, and he appears determined to expose them all in his bitter war with his relatives.”

We’ve heard this story before. This report touches on all of the common points: Prince Harry hates his family, everything is Meghan Markle’s fault, and Harry’s memoir is going to destroy the royal family. But here’s the thing: Aside from some criticisms of the way the royals operate, Harry has maintained that he loves and respects his family. He has never directly attacked any of their characters.

Furthermore, Harry is an adult. He can make his own decisions. The tabloids need to stop blaming Harry’s every action on his wife. If the duke does cast his family in any kind of unflattering light in his memoir, that’s going to be his decision, not Markle’s.

And according to Harry’s publisher, the book is shaping up to be an intimate and personal account of his lived experiences. If the duke spent the breadth of the memoir talking about his evil his stepmother is, that would surely just reflect poorly on him and his work. It really wouldn’t serve to accomplish anything, and it surely wouldn’t have an effect on the line of succession.

The Tabloid On Prince Harry

Of course, this story was no surprise coming from the National Enquirer. Back in February, the outlet reported Harry was feigning his security concerns to manipulate Queen Elizabeth. Then the outlet alleged Harry was actually regretting moving to California and was begging the queen to let him rejoin the royal fold. And finally, the publication alleged Harry was harboring damaging information about Queen Elizabeth and planned to blackmail Her Majesty. So, anything the Enquirer says about the Duke of Sussex really doesn’t hold much weight.