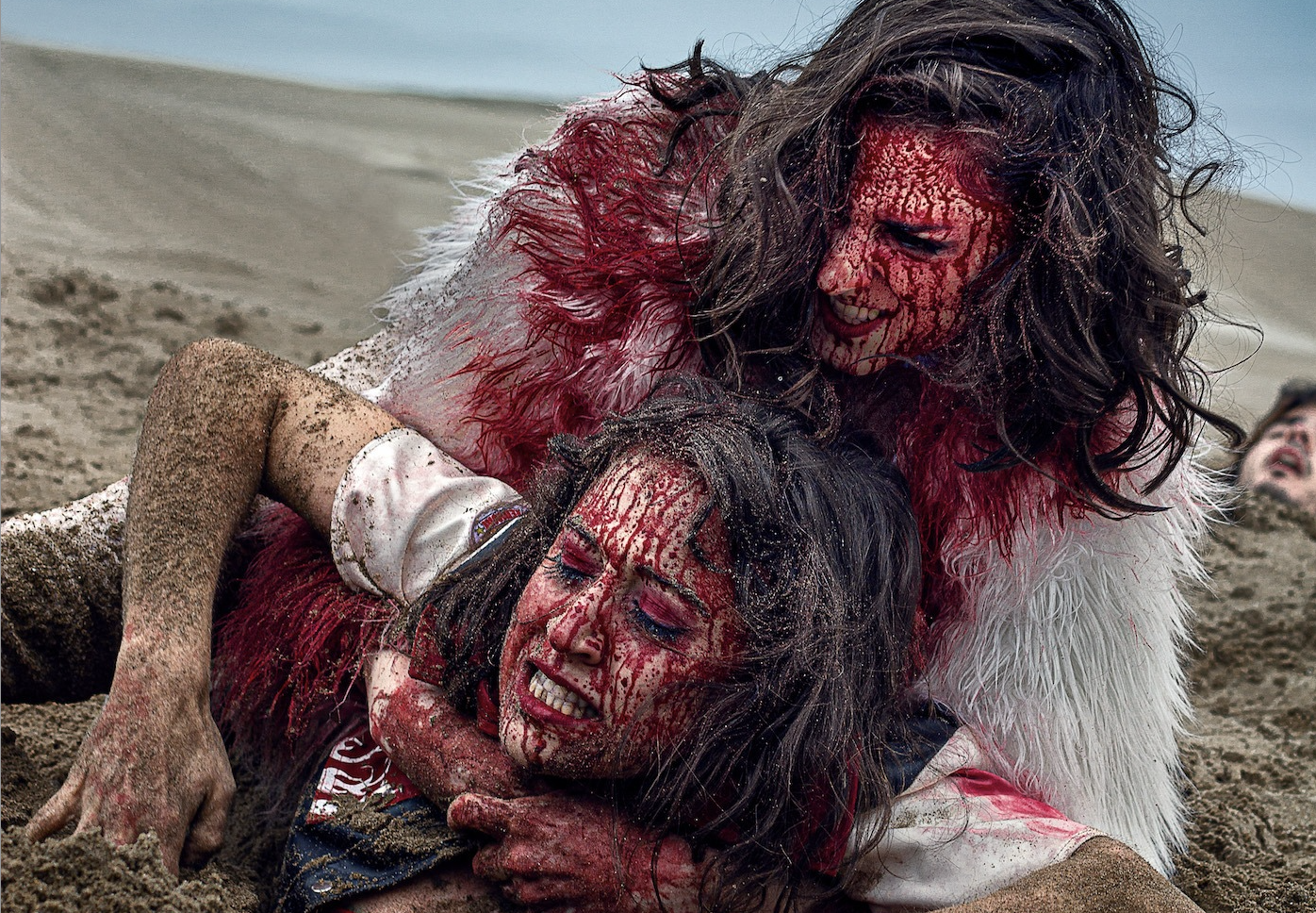 ‘PussyCake’ – Reviews Praise SCREAMBOX Original as “a Grotesque Mashup of Josie and the Pussycats and Evil Dead”!

The all-horror streaming service SCREAMBOX is now powered by Bloody Disgusting, and we’re excited to let you know that the next SCREAMBOX Original is PussyCake , a gore-fest from Argentina that will be available On Digital Streaming on SCREAMBOX August 30!

With reverence for many of the eighties classics we love, including Sam Raimi’s Evil Dead(!), Pablo Parés‘ PussyCake promises monsters, inter-dimensional journeys, kickass music and of course, lots of gore.

In the film, a struggling all-girl rock band kicks off a new tour, hoping to rekindle their popularity. Things are off to a bad start, however, when they show up to their first gig to find the town deserted. After they catch the attention of horrors from beyond our reality, the band realizes that being forgotten by their fans is the least of their problems.

ScreenAnarchy raved about PussyCake out of the Fantaspoa premiere, calling it “pure, uncut Midnighter fodder,” further adding that it’s “absolutely frantic, manic, nonsensical and off the wall!”

It then screened at the Chattanooga Film Festival this past weekend where it received a heft of praise.

Daily Grindhouse calls it “the femme midnight zombie flick you didn’t know you needed,” adding that it’s “a gloriously grotesque mashup of Josie and the Pussycats and Evil Dead.”

Eric Langberg published a review over on Medium, calling PussyCake “a punk-rock gorefest for the ages,” and exclaiming that it’s “SLiTHER meets Josie and the Pussycats meets 28 Days Later meets Psycho Gorman.” He adds: “As the kids say… this movie fucks.”

“I want to see this in a crowded theater or at the drive-in and just hear an audience go wild for this,” writes Bands About Movies, who also joked, “I can only imagine the hot water and fresh towel budget that this film had.”

Here are a handful of the insta-responses from Twitter:

The best way to describe PUSSYCAKE:

PUSSY CAKE is like if someone made an EVIL DEAD flick under the Troma umbrella. Did not expect this to be so insane and gory either. Puke budget was at least 10k. Highly recommended for people that want a cool monster movie with a ton of blood and craziness. #chattfilmfest pic.twitter.com/hgO6nfCczS

Light movie day for me, but I did squeeze in one #ChattFilmFest flick… the bright and gory Argentinian romp, PUSSYCAKE! A rockin’ girl band finds their next tour stop overrun by milk-spewing, horseshoe crab-headed townsfolk and the guy below. An entertaining and bloody time! pic.twitter.com/5Q1rxD3m5R

PUSSYCAKE: An all girl rock band vs some gross milk drooling zombies. What’s not to love?

That, without a doubt, was one of the best puking zombie alien films I have ever seen. #PussyCake #ChattFilmFest

In addition to releasing on VOD platforms such as Apple, Amazon Prime Video, Google, Vudu, and Xbox, PussyCake will debut on Cinedigm’s horror streaming channel SCREAMBOX.

SCREAMBOX features a broad mix of content for casual and die-hard horror fans alike. The service is refreshed monthly with content from the Company’s extensive genre library with films and episodes delivering every type of terror imaginable – supernatural, slasher, zombie, and more. Screambox is available to stream on iOS, Android, Prime Video, YouTube TV, Comcast and screambox.com.

Sign up for SCREAMBOX now and get 30 DAYS FREE.