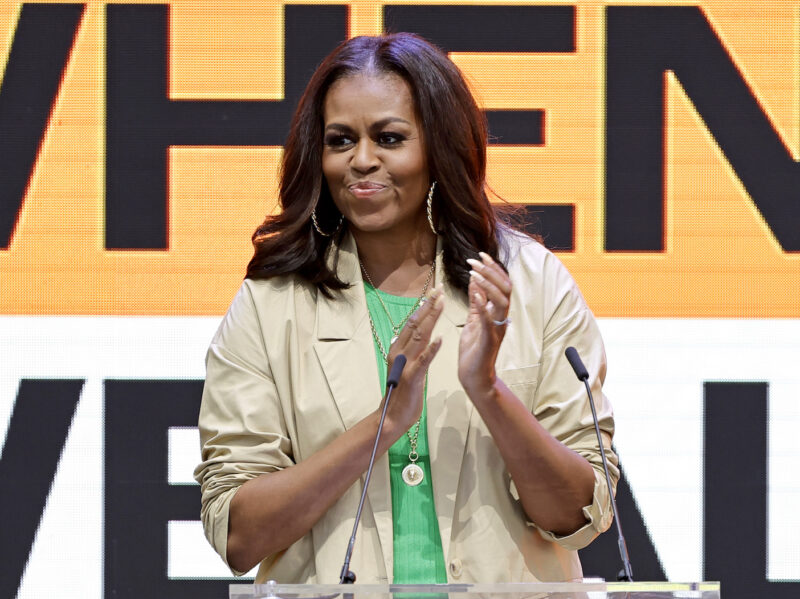 The Obamas are supposedly at odds over their future together.

Is Michelle Obama striking out on her own? One tabloid claims Michelle is leaving Barack‘s shadow and pursuing a totally different career path. Let’s check in on the former first lady.

This week, the Globe reports Michelle Obama is going Hollywood. According to the article, the former first lady is ditching her husband to rub shoulders with celebrities. “She’s accepting invites without Barack, hobnobbing with celebrities, and hosting private luncheons and dinners in LA,” an insider spills. “She prefers the California climate and has shoved Barack aside feeling he’s basically useless when it comes to her agenda.”

Apparently, Michelle is considering focusing all of her efforts on her and Barack’s production company, Higher Ground. But sources say Michelle has even been acting differently lately, and Barack is starting to get concerned. Apparently, Michelle caused quite a stir at home after getting caught embracing Formula One driver Lewis Hamilton during a trip to Miami.

“Lewis is two decades younger than her, but Michelle acts like she’s a schoolgirl with a crush around him,” a tipster squeals. But despite her husband’s worries, Michelle is said to be embracing her new life without the former president. “With him out of the picture, she feels there’s nothing she can’t do!” The snitch concludes.

This report is an odd one. Due to the tabloid’s offensive portrait of Michelle Obama, it feels like we’re talking about an entirely different person. Nevertheless, let’s take a look at what the former first lady has been up to.

First, we’ll concede one point: Higher Ground is ramping up production on two new films. Even though the magazine didn’t even bother mentioning it, we’ll throw them a bone and say, yes, both Michelle and Barack are more invested than ever in their shared production company.

But we also have to mention that Michelle’s activist work hasn’t slowed down either. She recently flew to California for the Democracy Summit to promote young voter turnout.

She also joined her husband to represent the Obama Foundation’s work to aid students in Chicago’s south side.

And most recently, Mrs. Obama penned an essay in response to the Supreme Court’s decision to overturn Roe v. Wade.

So, looking at all of Michelle’s philanthropic efforts, we just aren’t seeing the fame-obsessed California dreamer that the magazine describes.

But most telling is the tabloid’s obsession with Michelle’s brief interaction with Lewis Hamilton. For the past three weeks, the Globe has repeatedly claimed that Michelle was infatuated with Hamilton. And just as we explained with each report about the Obamas, the former first lady simply hugged Hamilton during her brief visit. That’s the extent of her alleged “crush,” and there haven’t been any more interactions between the pair to speak of since.

The Tabloid On Michelle And Barack Obama

Of course, we knew what we were getting into with the Globe. The rag has relentlessly gone after the Obama family for years now. Last year, the outlet reported Barack was furious with Michelle after “going Hollywood” and spending too much money. Then the magazine claimed Michelle was purposefully driving her daughters’ boyfriends away. And earlier this year, the tabloid alleged Michelle was “at the end of her rope” in her marriage to Barack. Obviously, we’re hesitant to trust anything the Globe says about the former first family.