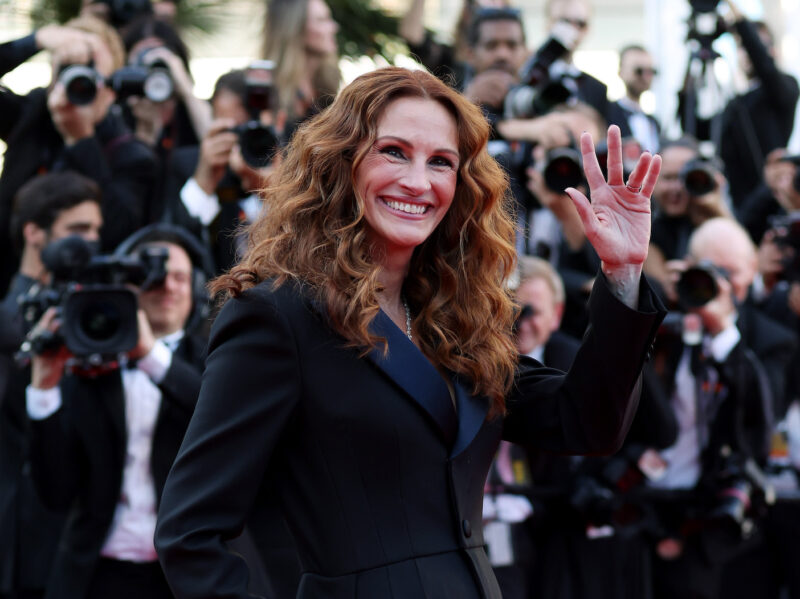 The start of Julia Roberts’ relationship is still pretty messy.

Is Julia Roberts once again at odds with Danny Moder‘s first wife? One tabloid claims the couple is struggling after being reminded of the stressful start to their romance. Let’s check in on the co-workers turned parents of three.

This week, New Idea reports an old scandal is coming back to haunt Julia Roberts and her husband, Danny Moder. According to the report, a viral Instagram post recounting how Roberts was the “other woman” at the start of her relationship with Moder has put the couple in a difficult position.

Spies say the post included a photo of Roberts’ famous “A Low Vera” shirt. Roberts publicly wore the shirt in reference to Moder’s first wife, Vera Steimberg, as she was stalling their divorce at the time, preventing Moder from getting remarried. After Roberts’ pointed message made its rounds, Steimberg granted Moder the divorce. He wed Roberts just one month later on July 4, 2002. And now that she and Moder are nearing their landmark 20th wedding anniversary, sources say the post was a real punch in the stomach.

“Julia is not thrilled that the less-than-savory way her marriage began is being wheeled out on the internet,” an insider spills. “Still, she and Danny remain united and are determined not to give this online spectacle too much credence.” And the outlet notes that Roberts never regretted making the shirt. “Julia was at the end of her tether with it. She hated being known as the ‘other woman,’ and all the affair claims were too much to bear,” the tipster adds. But on a final note, the source says Roberts dreads having to explain the whole story to her children one day.

Is Julia Roberts’ Marriage Under Stress?

Here’s the deal: This post was so low-profile that it isn’t even being reported on by any major outlets. Roberts certainly isn’t fielding any questions about Vera Steimberg, and we doubt she even noticed this supposedly upsetting post. It’s a bit ironic that the magazine is droning on about how terrible it must be for Roberts to be reminded of her and Moder’s past when that’s exactly what it’s trying to do.

But we doubt the mere reminder of their past would have affected Roberts and Moder too harshly. They know what happened, and it’s all ancient history at this point. The couple has welcomed three beautiful children together, and this whole story was just a lazy attempt to invent conflict in their marriage. And, interestingly, this is far from the first time the tabloid has tried something like this.

The Magazine On Julia Roberts

New Idea has a long history of casting doubt on Roberts and Moder’s marriage. A recent report from the outlet claimed Roberts and Moder were taking a “make or break” trip to Australia. And then the magazine claimed that Roberts not once but twice secretly had some kind of romantic relationship with George Clooney. So, we’re automatically skeptical of anything New Idea has to say about Roberts.