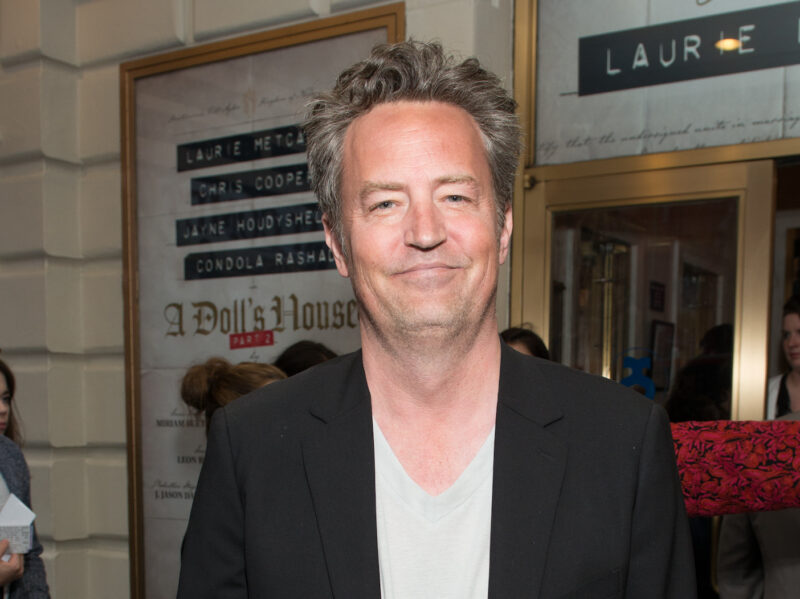 The rumor says Perry allegedly broke a pact among the cast.

Is Matthew Perry on the outs with his Friends co-stars? One tabloid claims his former castmates haven’t taken kindly to his latest announcement. Let’s check in on Perry.

Matthew Perry Left With ‘No Friends’?

The latest edition of Star reports Matthew Perry has been hard at work since reuniting with his Friends co-stars last year. “He’s got a terrific sober squad there for him 24/7,” an insider reveals. “He’s doing much better and improving every day.” The outlet notes that Perry’s certainly taken a turn for the better since appearing “disheveled and slurry” during the reunion special.

But sources say that’s no thanks to his old co-stars, Jennifer Aniston, Courteney Cox, Lisa Kudrow, Matt LeBlanc, and David Schwimmer. “They wish him all the best and are proud of him,” a tipster divulges. “But there’s a shared feeling that Matthew needs to stand up on his own two feet and deal with his issues himself.” And yet, that’s still not the only reason his old friends have pulled away.

Apparently, the old Central Perk crew weren’t happy to hear about Perry’s upcoming memoir. “There was this code that nobody blabbed and the scandalous incidents would stay on set,” the snitch dishes. “Now that pact is being broken.”

There are a few red flags in this story that we’d like to take a closer look at. The first question on our minds is who is speaking for all five other Friends stars? While we know Aniston, Cox, and Kudrow keep in touch, it would still be a stretch to claim they are all on the same page about Perry. But when you try to rope Schwimmer and LeBlanc into this story as well, the likelihood of this tale reduces tenfold.

Furthermore, it’s just offensive and lazy to bring up Matthew Perry’s “disheveled and slurry” appearance on the Friends reunion. As reported way back then, Perry had just recently undergone an emergency dental procedure prior to his appearance on the special, hence the slurring. This matter has been settled, and it’s amazing that the tabloids keep bringing it back up.

And finally, Perry most likely won’t be badmouthing his former co-stars in his new memoir. The book, Friends, Lovers, and the Big Terrible Thing, is presumed to focus heavily on Perry’s battle with addiction. Perry even admitted once that he struggles to remember a large chunk of his time on the show due to his excessive alcohol consumption. But even if it does go into great detail about Friends, it is still understood to be his own personal experience. Good memoirs don’t try to speak for anyone else; they can only provide a single person’s point of view.

But we’ll certainly find out in November when Perry’s memoir hits shelves.

The Tabloids On Matthew Perry

This is far from the first time a tabloid has pushed a narrative like this about Matthew Perry. Back in November, In Touch reported Perry was scaring his friends with his appearance and reclusive behavior. Then New Idea claimed Perry secretly hated Matt LeBlanc during their time working together. And more recently, OK! claimed Perry was furious over LeBlanc’s 2004 “betrayal.” Clearly, none of these outlets has any insight into Perry’s personal life.